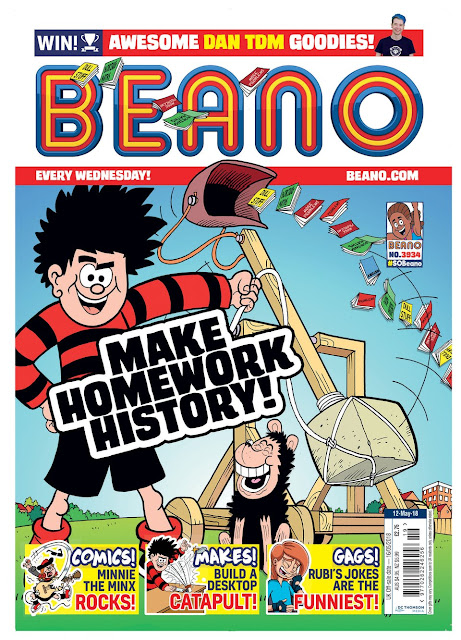 Here's a quick cover preview of this week's Beano, on sale Wednesday 9th May. Full of your usual favourites, plus another Big Eggo strip from me. 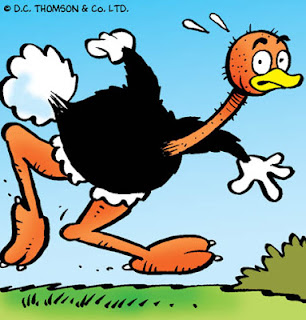 You can find out more at the Beano website:
https://www.beano.com/posts/inside-beano-no-3934-dennis-discovers-medieval-methods-of-homework-destruction

interesting how times change.. seam to work though.. but anyone else notice the last... must be a few years.. maybe 10 now.. Walter, prince of Softies, is now pretty nasty and hardly soft? its interesting change.. probably to reflect various changes in attitudes..

Yes, the change is deliberate to make Walter less of a victim and not show Dennis as a bully.

does seam a little weird.. but I guess it's not my period of Dennis that I prefer ^_^ I prefer the ones where he picks on people like Walter but it always backfires on him (well, almost. and it wasn't always Walter).. but I can see why it changed and it seams to be doing well for itself so no really any complaints.

On the subject of The Beano reflecting changes in society:
Recently, Lew posted a page from the sixties in which a group of middle-aged men gratuitously beat two children with baseball bats or similar, causing grievous bodily harm. This behavior was deemed acceptable. Nowadays, with corporal punishment banned at school & home, how can teachers & parents discipline The Menace, The Dodger & The Minx, when they failed so badly in the sixties?

Teacher, on phone: I'm keeping Dennis in for detention tonight. Would you collect him from school at 5:00pm?
Dennis's Dad: Sorry, I'm working nights and my wife will be at Bingo.
Teacher: Never mind. I'll send Dennis home normal time.

When I was doing Tom Thug, his bullying would backfire on him physically or he'd be shown staggering as he carried home a HUGE pile of books, having been given "extra-extra-homework". (Thankfully I never had to, or felt inclined to, show Tom receiving corporal punishment. It was being phased out of comics, and real life, by then.)

Dennis has had to change because of social changes but also because of his various TV shows over the years. Although they've retained the essence of the character as a cheeky anti-hero of sorts, all the negative aspects, such as picking on innocent people had to stop. I never liked that aspect of Dennis and I'm glad it's gone. Bullies should never be the anti-heroes, which is why I created Tom Thug as a straightforward bully, not someone to admire.

Some may see the changes to Dennis as "political correctness". I see it as enlightenment.

Probably heresy, but I despised Dennis when I was a kid. The art was part of it - prepubescent me did not appreciate it at all - but it was mainly due to the bullying.

Didn't understand it at all. Beefy was portrayed as the villain in Bully Beef and Chips, while Dennis was the hero despite being every bit as bad.

To be fair, Dennis captured the spirit of the time he was created in. That post-war period had an atmosphere of anti-authoritarian comedy that increased throughout the 1950s and '60s. However, it was one thing for Dennis to knock off a copper's helmet with a blast from his pea-shooter, but another thing to be bullying the local "softy". I think the bullying of Walter may have increased in the '70s/'80s, but I'd stopped buying the Beano by then.

I should point out that any bullying in the Dennis strip was never intended to be malicious, - unlike that of Bully Beef, who received his quick (and often violent) comeuppance every week.

Wee bit younger than you, so grew up with '70s Dennis. He seemed pretty malicious to me at the time, but then I'd have been about 6-7 when reading the Beano (stopped when Billy the Cat and General Jumbo finished) and not developed enough to note the nuances of him or how he differed from Beefy.

Hmm. Thinking on, I can guess why I reacted so negatively to the character. Not only was I the youngest child with two delightful older sisters, but my Beano reading years coincide with gaining a stepmother who made Cinderella's look warm-hearted and moving to a new school. So there was a fair amount of bullying at school for a while before settling down, a not particularly fun home life that got progressively worse, and a kid who used comics as an escape. Dennis didn't provide that. It was easier for me to relate to his victims.