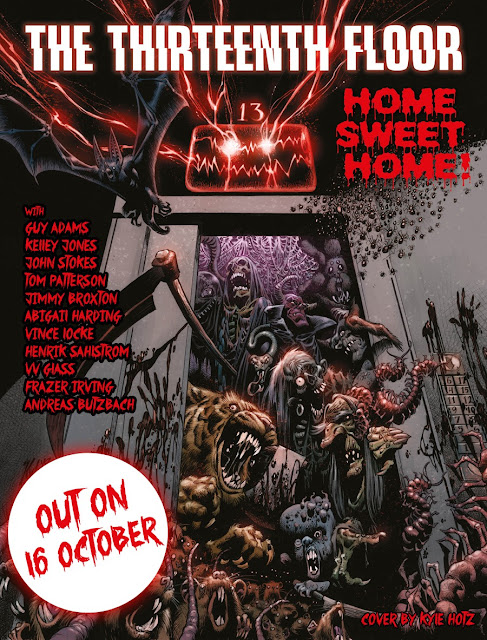 Rebellion have teased Kyle Hotz's cover to The Thirteenth Floor Special in this advert for the 52 page all-new comic that arrives in shops on 16th October.

Previously announced as the Scream and Misty presents The Thirteenth Floor Special it seems the title may be altered now, but we'll see. This has been a fantastic year for Rebellion reviving old comics and strips, with the Cor!! Buster Humour Special and the Tammy and Jinty Special giving us fresh takes on old characters. The line-up of talent for The Thirteenth Floor Special looks impressive, and good to see Tom Paterson in there too, which means a spot of comedy relief to the horror!

I'll be able to reveal more about this special when we get closer to publication date, so stay tuned to this blog!

Keep up to date with Rebellion's announcements on their Facebook page for The Treasury of British Comics:
https://www.facebook.com/britcomics/

"good to see Tom Paterson in there too"

It is but irritating that Rebellion have spelt his name wrong. Let's hope that isn't the final version...

That's only the advert, ev n though it uses the cover artwork, so hopefully it'll be corrected if Tom is mentioned in the actual comic.

He always signs his pages anyway so at least it'll be spelled right there. 😄

Looking forward to it.

Any idea why it is not called Scream! & Misty this year? I got the (mistaken?) impression that Rebellion was trying to built it up as a brand?

Originally I think it was going to be Scream and Misty presents The Thirteenth Floor. Perhaps it still will be... or maybe they wanted to simplify it as The Thirteenth Floor because one "character" might have more pulling power than an anthology title. I dunno. I'm just speculating really. At the moment they're still trying different things to see what works best. Interesting times!