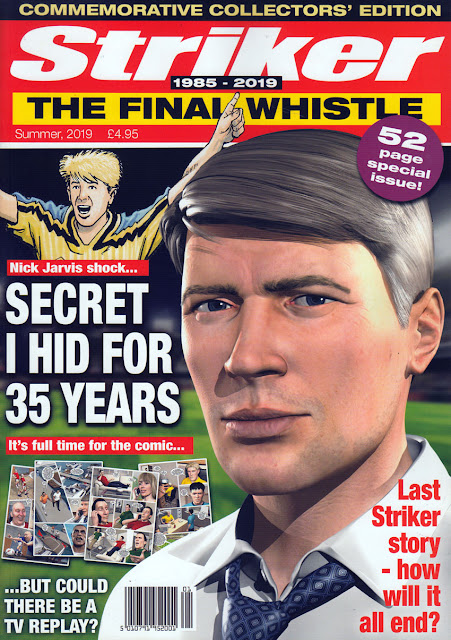 The seemingly indestructible independent football comic Striker has published its final issue as a 52 page special. The concept has a long pedigree, starting out as a daily strip in The Sun in 1985, then becoming an indie weekly comic in 2003 for 87 issues. Then it returned to The Sun as a strip in 2005 until 2009, transferred to lads mag Nuts in 2010 for several months, went on hiatus until 2013 when it returned once again to The Sun until 2016. Was then relaunched as a weekly comic again in 2018, went on hiatus after 24 issues, and is now back for the final special.

One has to give Striker's creator Pete Nash his due. He's stood by his creation for 34 years and has endured a lot of problems from publishers and distributors, not to mention the considerable expense, in order to bring his vision to his dedicated fans. Speaking of which, those fans deserve a round of applause too, for helping to support the comic through investing in shares and via Kickstarter.

Some people seem to think that football comics are sure sellers in the UK. Not so. Roy of the Rovers has really been the only one with longevity. Scorcher lasted for four years, but titles such as Score 'n' Roar, Hot-Shot, and Champ had very brief runs. (Tiger had a very long run but that's because it wisely cast its net to cover a variety of sports stories, not just football.) Although on the pocket-sized format front, D.C. Thomson's Football Picture Story digest ran for 15 years. In the whole though it seems that football fans would rather read a factual magazine about the game (e.g.: Shoot! or Match of the Day Magazine) than bother with serialised fiction. (Certainly when I was a child, classmates who were mad keen on football were the least likely ones to read any comics.) 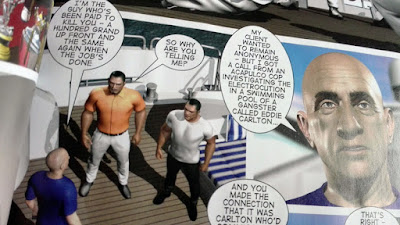 Yet despite its stop/start history, Striker did resonate with a lot of footie fans young and old. It cleverly used the Roy of the Rovers approach of including "soap opera" style sub-plots and ongoing continuity, but for an older reader. This could be somewhat controversial at times, such as women appearing in skimpy bikinis (or even topless) in the Striker CGI comic strip, while at the same time the comic was reprinting Billy's Boots and Kangaroo Kid from Scorcher for younger readers. 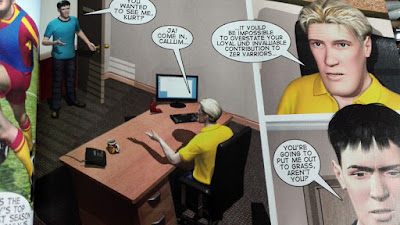 Yes, Striker was bought by a totally different readership than yer average comic fan. With its tits and bums lowbrow humour and stereotypical depictions of European players it often read like an episode of Minder or some 1970s sitcom. It was a comic for the bloke in the replica football shirt, shorts and flip-flops, plodding around Lidl with his identically-dressed son. But let's not mock that. Most adventure comics lost their appeal to the average person long ago, and now cater to an insular fanbase with impenetrable stories that require a nerdy 30 year knowledge of the characters. What Striker did was go back to the basics, and understood the mindset of the general public. All publishers would love to appeal to readers outside of the hard core comic fan market, but Striker achieved it! 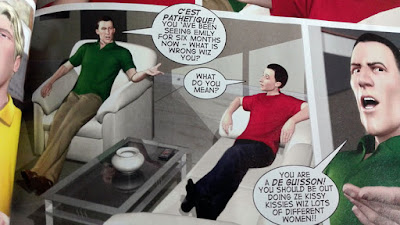 Striker: The Final Whistle, 52 full colour pages for £4.95, is on sale now in selected branches of WH Smith or you can buy it directly from the Striker webshop at this link:
https://www.planetstriker.com/striker-final-whistle-the-last-comi

Email ThisBlogThis!Share to TwitterShare to FacebookShare to Pinterest
Labels: Striker

A word should perhaps be said for DC Thompson's Football Picture Story Monthly, which managed to keep going for over 15 years (I remember that some stories crossed over into thriller territory).

I'll miss this blog when its gone!

I knew I'd missed something! Thanks. Will amend.

I found the average football fan... isn't much of one. I know it's an old joke about 'fairweather fans' but yeah.. my experience has often been a lot of them want their team to win, and can't enjoy a 'good game' even if there team wins, they just want to shout how they 'woz robbed' yet.. as a result, apart from fancy dress they often wear in the streets (while having some odd views of people who do that sort of thing for a reason and cause) they have little interest in stuff like history, comics, etc related to football..

of course, not true of all of them. Some enjoy watching a game without any personal investment and enjoy it for the fun of it.. but they are a very dying breed.

Of course, kids still buy the odd cards and stickers, though they don't even sell as well as they once did, and there are much less things like them out then there used to be.

Most of the football fans I know are genuinely interested in the game and have an astute perception of the sport, and accept any losses gracefully. I think the media tends to focus on the mouthy ignorant types in order to present a stereotype but there are lots of level-headed fans too.

I'd venture that football stickers sell less now for the same reasons as declining comics sales; kids don't go into newsagents on their own any more to spend their pocket money. Any such choices are made by the parents, deciding what their kids should have.

There was a magazine back in the early seventies from, I think, Polystyle called Striker. When it started it had some strips mixed in with the text articles. However by the 25th issue the strips were gone.

Yes, I vaguely remember the original Striker. I think it was published by City Magazines who did TV21 etc. Thanks for the reminder.

Scoop was a good balance of strips / facts - Jon Stark Matchwinner For Hire! a particular favourite. If I’m not mixing up my footy titles!

Scoop covered sport in general though, not just football. Even then it only ran for four years, but many comics were failing by then unfortunately.

As a big footy fan(albeit of a small football team) footy comics have never really appalled to me apart from Roy of the Rover that justbseemed to get the mix right for the age range it was aimed at, Hotshot Hamish/Mighty Mouse because of great art and humour and " It's goals that count" that for me just worked. The rest were mostly for me just so so. I tried Striker and it was well done but wasn't for me I'm afraid.

I'm hoping that Rebellion do a Hot Shot Hamish collection at some point. It was a popular strip.