Out today! THE VIGILANT No.2: LEGACY 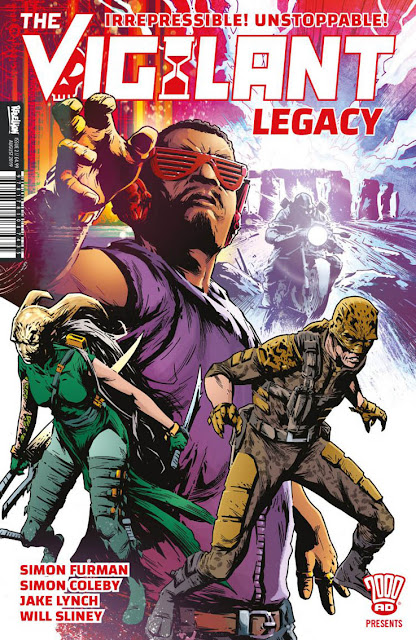 After the success of the Vigilant special that appeared last year, a second issue arrives on the shelves of WH Smith and comic shops today! The Vigilant: Legacy is a 64 page full colour comic with all-new material featuring reboots of classic characters such as The Leopard from Lime Street. Look out for Robot Archie and Tri-Man amongst others making an appearance this time too! 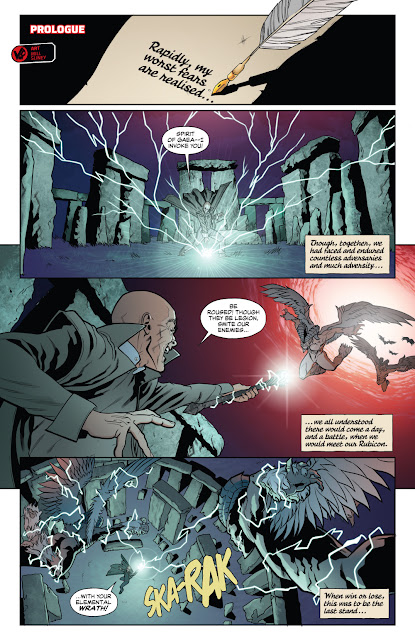 After their smash hit debut last year, The Vigilant return in August, resurrecting the greatest home-grown superheroes Britain has to offer – a team unlike any other, a challenge none have faced before!

Even if superhero comics have never been your thing, take up the call of The Vigilant with this 64-page special featuring Simon Furman (Transformers), Simon Coleby (The Royals), Will Sliney (Spider-Man 2099), Len O'Grady (Jaegir) and Simon Bowland (Doom Patrol).

Many years ago, a team of strange, super-powered beings were brought together by the original Dr. Sin in order to stop a reality-spanning apocalyptic event known as "The Blood Rapture." That incarnation of The Vigilant were successful in their mission, but it came at a great cost. Years later, the evil Nazi genius Von Hoffman is now searching for dangerous artifacts which will enable him to kick-start Armageddon once again. 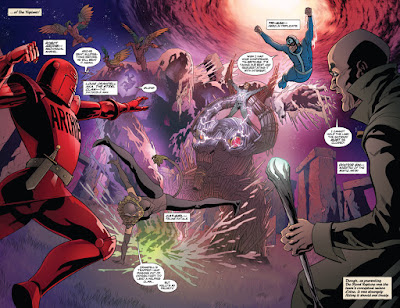 While the new Dr. Sin and his fresh team of ragtag heroes are tested by new threats and interpersonal conflicts, Hoffman creeps closer to achieving his diabolical goal. With the complete unraveling of all reality on the line, the stakes have never been higher for The Vigilant!

If you can't get to the shops you can order it directly from the publisher at this link:
https://shop.2000ad.com/catalogue/RCS1953

Email ThisBlogThis!Share to TwitterShare to FacebookShare to Pinterest
Labels: The Vigilant

I'm definitely getting this in the weekend.

Got mine last week from Rebellion. I must admit, I don't understand why they don't make it a monthly or quarterly even.

Oooh. My interest is piqued.

Might actually get it tomorrow if I go into town.

It's all about testing sales and the response first, Sid. The news trade isn't what it was, and launching a regular comic is a huge risk and very expensive. A special has a longer shelf life so a better chance of reaching more people than a monthly. So they're putting out various specials to see what the sales are like. Hopefully... it will eventually lead to something more regular for one of them.

Maybe it could lead to a web series or even a bi/quarter-monthly publication or perhaps something made exclusive on Amazon or any other comic retail site.

There's not really any money in web comics apart from a few who have done well out of it. I think they'll want to try and reach as wide a readership as possible, so limiting it to exclusives would restrict its visibility. If it was an indie comic, possibly, but not for a mainstream company like Rebellion.

It pays for them to test the waters first like this. As we all know from the struggles that Striker faced, publishing a regular comic is very difficult. There are simply less people interested in comics now than there were 30 or more years ago. The fact that they're trying so many specials this year is admirable in itself though, so hopefully it'll develop eventually. It's a fine balance between testing the viability of a title whilst not losing the momentum by leaving it too long between issues.

A fair point. The days of comics appearing in shops for 22+ issues are well gone. On the plus side, however, Rebellion is certainly committed to the classics with their collected books and specials. Not only that, it seems to be having an effect on DCT and their Heritage brand.

Yes, thst's just it. Publishers today can't afford to make the mistakes IPC did in the past with failures such as Jet and Nipper. The shrinking market means that they have to be more cautious. That said, it is frustrating when The Vigilant ends on a cliffhanger but hopefully it won't be another 12 months before the next chapter.

Frustrating perhaps. But it does suggest that there will be a 3rd and maybe even a 4th, etc..., issue?

Hopefully. It all depends on sales of course. Anyway, if not it can always be resolved in 2000AD I guess. (I'm surprised we haven't seen more classic characters rebooted in 2000AD by now. Black Max was in there at the start of the year though, so hopefully there'll be others.)

True. There are the ever reliable 2000AD and Judge Dredd Megazine but my fingers are crossed that The Vigilant will be a success.

A film of The Vigilant would be nice. A British superhero movie as opposed to an MU one.

Rebellion bought a film studio a while back so anything's possible! They'll need to establish the characters well first though so it'll be a way off yet.

I bought #1 last year and it was poor. Not going to bother with this. Happy with the originals Thank you. T

Pity. It's an improvement on last year's but thanks for airing your opinion.

I liked the artwork with the characters being brought to vivid life but the story was too meta/surreal for me.