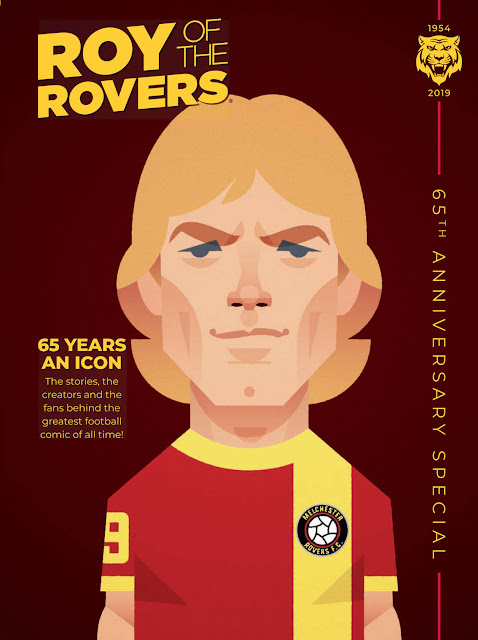 When I first heard that there was going to be a Roy of the Rovers 65th Anniversary Special this year I presumed it'd be the same as Rebellions others specials; a 52 page comic. Instead, what we'll get is a 128 page hardback book! A wonderful souvenir of the greatest football strip seen in British comics. (UPDATE: There is also a "floppy" version of this book. See here for details.) 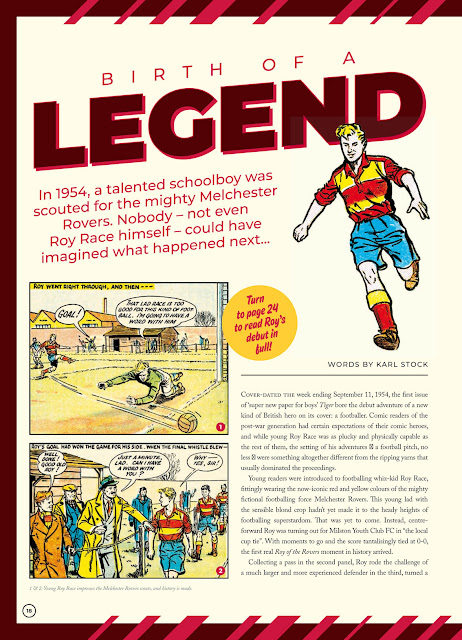 The book mixes all new features, anecdotes, and interviews with a selection of classic Roy of the Rovers strips from over the decades. It begins with Roy's debut in Tiger in 1954, and ends with the rebooted modern version of today. There are features and interviews with or about the artists and writers and key moments in the long life of the original Roy Race. Definitely one for Roy's loyal fans! 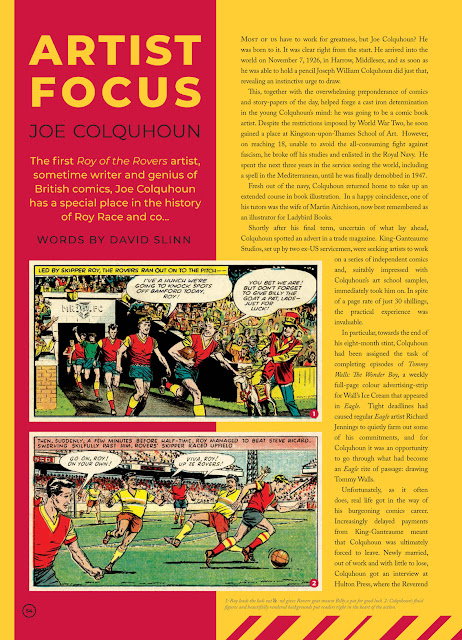 • RELEASE DATE: 11th September 2019
• HARDCOVER, 128 pages
• PRICE: £19.99 (UK)
• ISBN: 9781781087381
Roy of the Rovers is the greatest football comic of all time. For generations, the exploits of Roy Race enthralled hundreds of thousands of readers. Through kidnappings and shootings, pregnancies and punch-ups, Melchester Rovers’ star striker kept the goals coming - and became woven into the fabric of football in the process. From the comic’s first appearance in 1954, all the way through to its glorious 21st century reboot, Roy of the Rovers remains the greatest football fairytale ever told. Join us as we celebrate the stories, the creators and the fans that made Roy of the Rovers the phenomenon it is today.

Available in digital from: Roy of the Rovers webshop andapps for iPad and Android 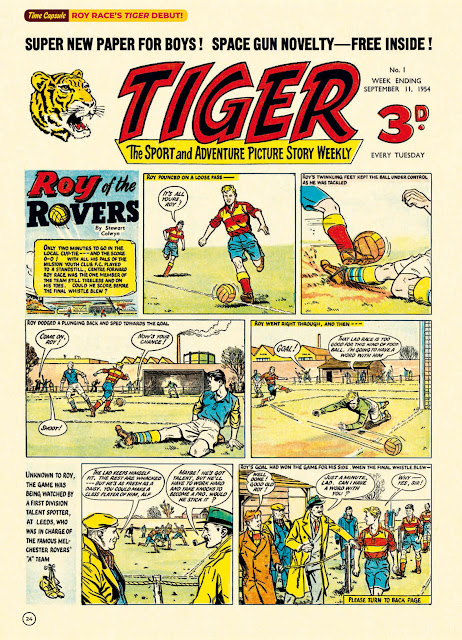 Email ThisBlogThis!Share to TwitterShare to FacebookShare to Pinterest
Labels: Roy of the Rovers

I know I said before that the players in flat caps were a bit different to today... that's a fellow in a top hat, isn't it! :-)

That guy with the top hat is the team mascot I guess ?

I never saw anyone actually dress like that but I remember a Subbuteo accessory from the 1960's with a similar looking character. There's a picture here https://www.subbuteoworld.co.uk/c114-mascot-bench-set-includes-ken-bailey-rattle

Has the current rebooted Melchester team shown a mascot yet ? These day's he's more likely to be dressed as a furry coat than holding a live one. I need to go over to Rebellion and order copies of the new series if I ever get time to read them.

Yes, he'd be the mascot. Might also be selling programmes and rosettes, with the top hat making him stand out and be recognised.

I can't recall seeing a mascot in the new series. These days the mascots of a club tend to be children I believe, with their dads paying the club for the honour? At least that's what I've been told.

I bought and am reading the 'floppy' edition - it is a good read and I am not a fan.

Amused how the text ignores the pictures where Race uses his right foot. I get the impression he was right-footed in the early days of the strip and then became a left-footer.

There is also the interesting point that Race got few England call-up storylines. This is actually a good point but the text mentions it casually and does not go into it.

The floppy has several instances of wrong pages used in the comic strips: page being repeated from a strip a few pages earlier etc so some you do not get the second page and others the first page of the 2-page reprint.