Who was Chick Henderson? 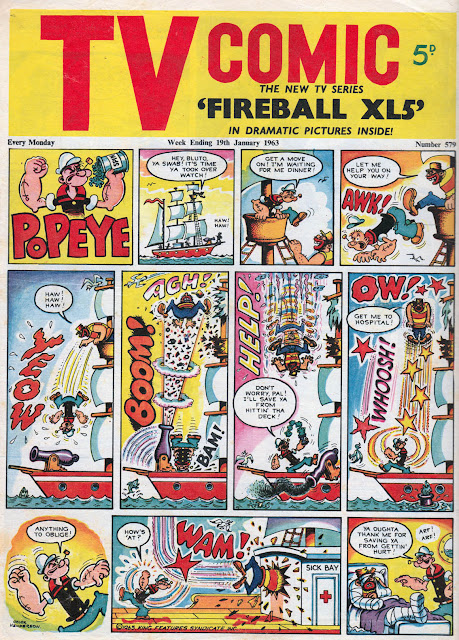 A cartoonist I really liked, although I only have a few samples of his published artwork, was Chick Henderson. He drew Popeye for TV Comic for a while in 1963. His pages had a lively energy to them and a distinctive look. (I like the stippling effect on the one above, and his sound effect lettering.) 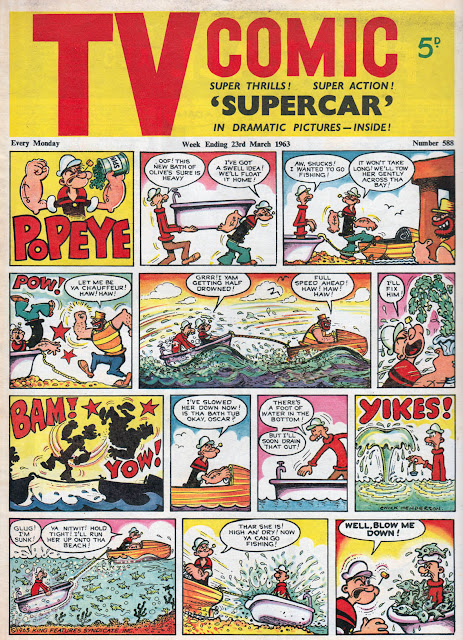 Thing is... I don't know what else he did, and a Google search for Chick Henderson mainly shows results for a singer of that name who died in 1944 so clearly a different person. Does anyone out there have more info on Chick Henderson the cartoonist? If so, post a comment below please. 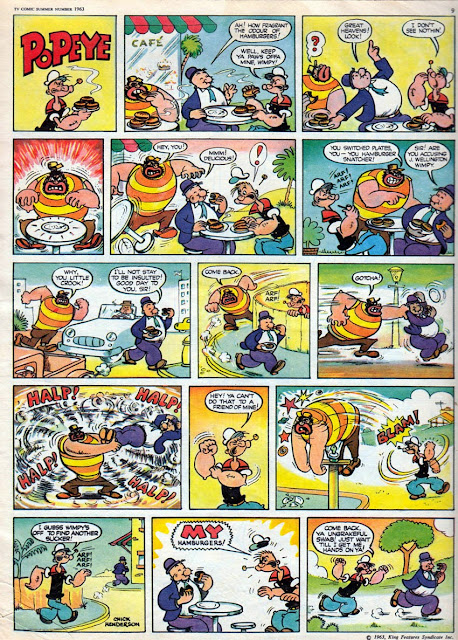 All pages scanned from my own comics collection.

A. W. "Chick" Henderson worked for Gaumont British Animation, the animation arm of Gaumont, doing some stuff like a series of short animal cartoons with David Hand (a former Disney director) under the name 'Animaland'. Which, out of interest, were co-written by Reg Parlett and Nobby Clark.

I believe he also illustrated Yogi Bear in the 60s british comics and did some writing for radio and I think some cartoons. A lot of … small time? British animators worked on comics.

Thanks Ryan. Where did you get your info from? I didn't notice it online,

Part comes from Comic Creators UK (https://comiccreatorsuk.wordpress.com) which, among other bits, had talk about Popeye's UK comics and printing, including commenting that Chick Henderson was A.W. Henderson and that he was an animator with Gaumont British Animation. Which I then followed up with places related to that, mostly http://www.angelfire.com/nj/healing/moorhallindex.html
which is all about Gaunmont British Animation / Moor Hall studios (by the way, part of the crew included Musical Paintbox which was headed by a Henry Stringer.. some distance relation no doubt (though distance is probably fairly large like with a lot of people) and the studio head David Hand.

There is probably more to find cause, well.. for some reason, people have never really taken British Animation that seriously and UK channels, while once where happy with British created content, decided the importing cheap shows from the US (where, understandably, they have far more money and people) stuff was much cheaper. which also then lead most UK animation being farmed out to more and more aboard studios because if a country has a 'lower' standard of life (not saying worse, as we have a much lower standard then the USA and I would say, we in fact have a much better standard) then things cost less, and so things are cheaper to make... anyway.. not many UK studios left though Crowsgrove hall did kinda make a come back but sadly, are but a shadow of the heydays..

Thanks. It's Cosgrove Hall by the way, but Crowsgrove has a charm to it. :)

Ah, yes of course.. must have mistyped ^_^ With the amount of there stuff I have, I really need to hang my head in shame.

It could have been a weird autocorrect. I knew what you meant anyway. :) Thanks again for the info.

Long been fascinated by Gaumont-British Animation. Not only because of what might of been had Rank not shut it down (despite it being profitable), but because of the impact that closure had upon the British comic industry.

The studio employed a veritable Who's Who of recently demobbed creatives (includin - but not limited to - Bob Monkhouse, Michael Bentine, Mike Western, Ron Smith, Eric Bradbury, Reg Parlett), that suddenly found themselves in need of work. So, off to Fleet Street they went.