In the shops now 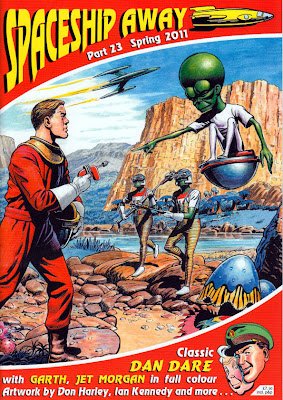 Here's a brief roundup of some of the British comics that are available right now...

Spaceship Away No.23 £7.50
The first issue under the new editor Des Shaw, the thrice-a-year Spaceship Away pretty much carries on as before but with a few tweaks. The illustration on the cover is just part of a wonderful new illustration by Don Harley that takes up the centre spread.

Brand new Dan Dare strips this issue are part three of Parsecular Tales by Tim Booth, and part one of Pre-Emptive Strike by John Freeman and Mike Nicoll. There's an amusing crossover with Ray Aspen's humour strips Mekki and Our Bertie, and the reprint strips are Shadow Over Britain from Express Weekly and Garth from the Daily Mirror. Features include an interview with David Motton, scriptwriter on Dan Dare in the 1960s.

Spaceship Away is available at some comic specialist shops or you can buy it online here: http://spaceshipaway.org.uk/ 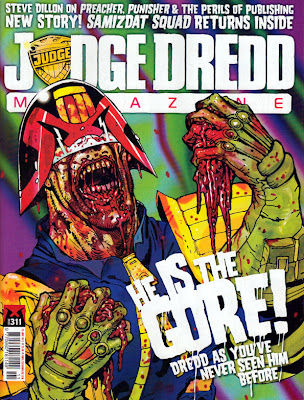 The cover of Judge Dredd Megazine this month looks like the sort of comic Eagle set out to challenge. Fortunately in a tolerant society both types of comic can live in harmony. Yes, it's Judge Dredd as a zombie, - or rather the modern idea of zombies; flesh-eating ghouls. Brendan McCarthy provides the striking cover artwork and also for the relevant 10 page Dredd story inside, written by Rob Williams.

Other contents include Anderson Psi Division by Alan Grant with stunning artwork by Boo Cook; Numbercruncher part 6 by Si Spurrier and PJ Holden; and the first part of the new Samizdat Squad story by Arthur Wyatt and Paul Marshall. Features include interviews with Steve Dillon and Matt Brooker.

The comic comes bagged with a full colour Flesh graphic novel and the whole package costs £5.49. Worth it though! 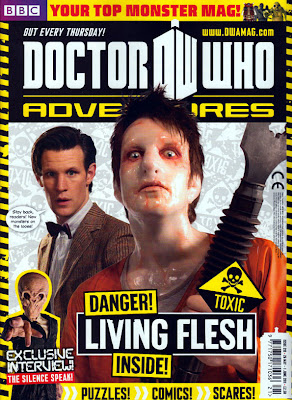 The horror theme continues in this week's Doctor Who Adventures with a startling photo cover showcasing the latest TV episode. The magazine has had a redesign recently and is all the better for it. Admittedly it's strictly aimed at kids but the feature pages are still less literate than children's comics of my day which is a shame. That said, the four page comic strip Reality Cheque by Christopher Couper and John Ross is a well structured articulate piece that's leagues ahead of the early Doctor Who strips of TV Comic. Bagged with a few gifts for its usual price of £2.50. 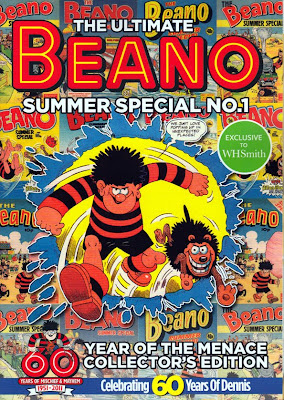 A surprise, unadvertised, publication this week was The Ultimate Beano Summer Special No.1. Legend has it Summer Specials ended because retailers hated one publication taking up shelf space for months, but DC Thomson have an exclusive arrangement with WH Smith for this issue, which is only available in their stores.

Don't expect to see the tabloid glossy special of old though. This is a 64 page A4 size softback book consisting solely of reprints from Beano Summer Specials of old. More of a publication about old specials rather than one itself, with each page carrying the date of its original source. Although the pages are scanned from the old issues, the reproduction on the quality glossy paper is excellent and it's a fine showcase of classics from Davy Law, Dave Sutherland, Jim Petrie and others. £4.99 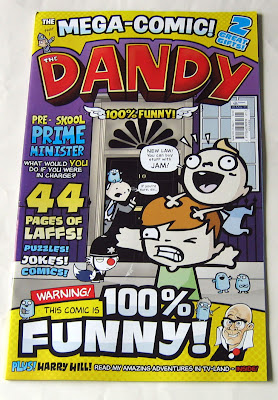 This week's Dandy is one of those bumper 44 page special issues that DC Thomson now produce every time there's a school holiday. The cover is in the tall format to give it prominence on the shelves, and the back cover also carries the Dandy logo to thwart retailers who stack the comics back to front. Unfortunately it didn't thwart by local Smiths who had it displayed upside down. 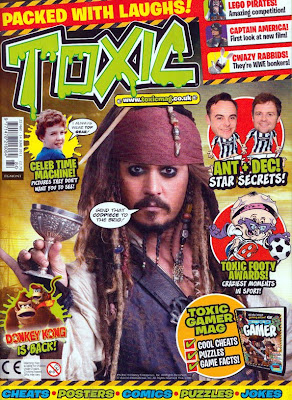 The latest Toxic is also a bumper issue for the school break. I was ill when this issue was being put together so Team Toxic is reprint this time, but I did provide artwork for two double page feature pages; Pirate Maze and Toxic Footy Awards. There's also new strips featuring Gorilla Kid by Jason Loborik and Anthony Williams and Robin Hoodie by Luke Paton and Laura Howell. Plus a bunch of features and a pile of bagged gifts. £2.75 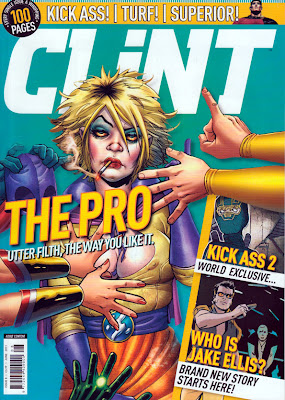 The adult comic Clint has now reached issue 8 and seems to be giving priority to artwork on covers at last instead of pasty-faced celebrities like Frankie Boyle. The 100 page monthly hasn't really lived up to the expectations of it being a new British adventure comic as its strips are all reliant on American reprint or material that wouldn't be here if it wasn't also being published in the USA (eg: Kick Ass 2). That said, for those of us who haven't bought the US comics this is an economical way of obtaining them.

This issue sees the start of Image Comics' Who Is Jake Ellis, full of fast paced intrigue and like a sleazy version of Randall and Hopkirk (Deceased). We also get part 3 of Mark Millar's Superior, with great artwork from Leinil Yu; the final part of black comedy The Pro by Garth Ennis and Amanda Conner; another chapter of Turf by Jonathan Ross and Tommy Lee Edwards; and the aforementioned Kick Ass 2 by Mark Millar and John Romita Jr. The violence and language won't be to everyone's tastes but, y'know, it's only a comic. £3.99 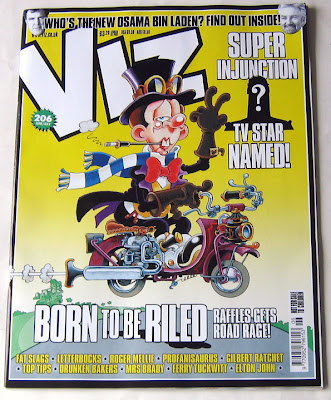 Finally, the latest issue of Viz just dropped through my adults-only letterbox. 52 pages of irreverent fun, sharp satire, and sweary comic characters beneath another great cover by Simon Thorp. Guaranteed to offend someone, somewhere, from humourless priests to mad beardy hermits. (At time of press Bin Laden was not available for comment.) £3.20

Thanks for the heads up on the Beano special Lew. However I have just come out of WHSmith in Worthing empty handed. Not because they have sold out but because this store, right in the centre of a town of 100,000 is classed as small. Small means no delivery nor any ability to order it in as it is on their system as a one-off. Instead I am advised to try Brighton. No one hold your breath for another special if all of this is true...

Smiths self-imposed ordering policy seems inconsistent. My town has a similar (even smaller) population and we had several copies in stock.

It might be useful if you contacted DC Thomson about this as it appears Smiths aren't following their side of the exclusive arrangement.

I saw about 6 copies in WHS in the centre of York (population around 198k) Their comic policy is hard to follow - I can buy Clint at the railway station branch but have to walk into the city to get the Dandy or Commando. Both outlets sell the regular edition of the Beano.

WH Smith local managers have their own policies. In my town, popluation 500,000 if you just count the centre or 1,100,000 if you count all the other bits, in the main store in the heart of the city, there are a grand total of Zero copies of this, as there used to be of Classics from the Comics. The Dandy is not far from this figure, though Beano and Toxic both have about 10 copies each.

Interesting. Whenever I've asked them about stock in the past they've always behaved as though they're at the mercy of head office who tells them what to stock. That's why I never bother asking them these days. Although our branch often seems short staffed, with the checkout girl/boy closing the til to arrange the shelves and only going back when there's a queue.

I had a phone conversation with DC Thomson's circulation department this week. The special's official launch was 1st June although Smiths staggered it with some distribution ahead of that date. Two further bits that came out are firstly that they are very aware of poor stacking of their titles in some of Smiths branches. The other is that they are discussing a further special for the future.