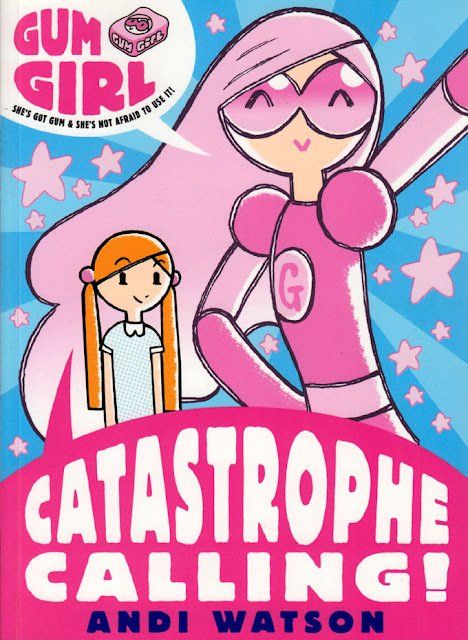 I can't help thinking that the critics who claim that the British comics industry is dead, or, more incredulously, that there are "no longer any mainstream UK comics", are missing the big picture. True, there are far less all-comic publications in newsagents now, and it's depressing that emphasis is given to licensed product rather than originated characters, but mainstream UK comics are out there.

Due to a combination of today's kids apparently having shorter attention spans and a retail trade that makes it difficult for non-licensed comics to break in, the traditional weekly/monthly comic isn't having an easy time. However, graphic novels (for want of a better term) have been around for a while now and it's a format that UK creators and publishers are finding more appealing. 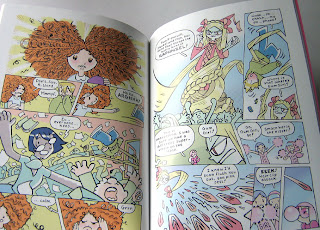 The origin story, Welcome to Catastrophe, opens with young Grace Gibson and her family moving to the strange town of Catastrophe. A town brimming with weirdness, with such locations as the Fiasco Shopping Centre, the River Jinx, and the Wertham Asylum for Crafty Villains. After an accident with an old chemistry set spills onto her packet of bubble gum, Grace finds that she can blow indestructible bubbles and adapt the gum for other uses. Naturally, she designs herself a secret identity to fight crime as Gum Girl!

It's a brilliant book. Designed for young girls (although there's no reason why boys shouldn't also enjoy it) Gum Girl is proper comics. Andi Watson has an appealing art style which is deceptively simple but has a solid understanding of sequential art and design to it. He writes well too, with stories that use the British tradition of good comedy-action (eg: The Cloak, I-Spy, Eagle Eye) with a fresh, modern spin. 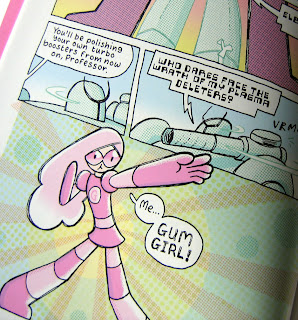 Andi is also the creator of the Glister books for girls, which are also in comic strip format. For more information on the artist and his books see the Walker Books website here: http://www.walker.co.uk/contributors/Andi-Watson-8343.aspx

If, as you say, kids have a shorter attention span nowadays how are they going to cope with graphic novels? Surely Dandy and Beano would appeal to short attention spans more than 64 page books?

As I said, I was talking about weekly/monthly comics, which don't command the attention of kids like they used to. (In other words most kids aren't in the habit of buying regular periodicals these days, so a book may have more appeal.)

There's a lot of competition out there for kids attention and hence the short span. They get a quick buzzz and then move on to something else. My boys will flick through beano, dandy and phoenix but equally will look at the internet (cbeebies games, NHM site - they're dino freaks), various books and off course the TV. In all - it's great being a kid, as there's a lot of stuff directed towards them. This does mean that the trad weekly comic is in a lot of competition. I have to be really firm and sit with them to get them to fully engage with whatever it is that is holding their attention.