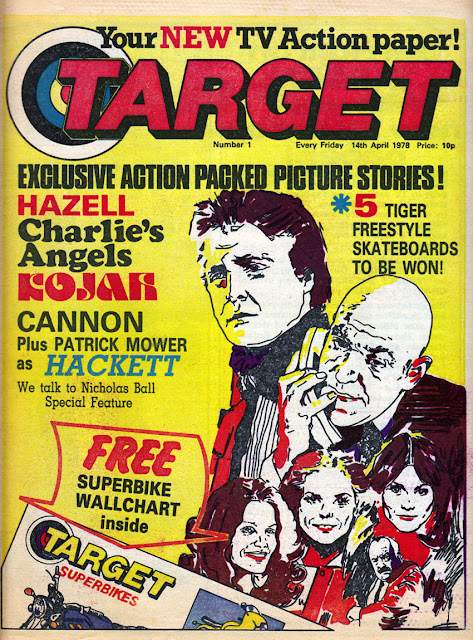 In newsagents this week in 1978 was the first issue of Polystyle's new adventure weekly, Target. Unlike the company's previous titles Countdown and TV Action, this comic was far from a slick publication. Printed on newsprint with only 20 pages, Target looked cheap but was quite expensive at 10p, when most other adventure titles were no more than 8p.

Clearly, Polystyle were hoping to attract readers of its defunct TV Action title as Target carried the topline "Your NEW TV Action paper". Perhaps this was a misstep because drawing comparisons between the two comics only highlighted how poor the new comic was. The production was low budget and its use of flat solid colours was limiting and made things even worse. The comic looked very shoddy on the stands next to 2000AD, Tiger, Look-In and the like.

There had been a boy's magazine called Target just a few years earlier published by the New English Library. (See here for my blog post about it.) However in the case of this new venture, the comic took its name from a British TV detective show of the time starring Patrick Mower, and the Target strip itself appeared inside. Unfortunately the basic artwork wasn't very dynamic and the heavy colours did it no favours. 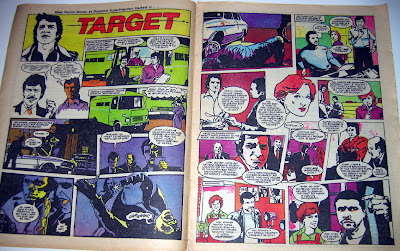 Kojak starred in the centre pages in a black and white strip drawn by Jon Davis. You'll notice that the strip is quite brutal in places for a British comic and I think Polystyle were trying to reflect both the changing tastes of television and hoping that Target could be their version of IPC's Action or DC Thomson's Bullet. I don't think it really succeeded. 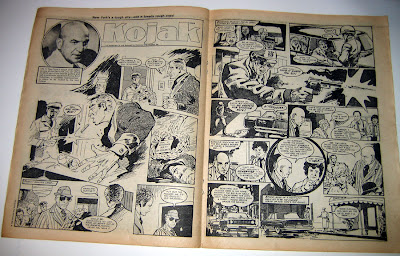 Cannon was a reprint from TV Action and featured artwork by Martin Asbury... 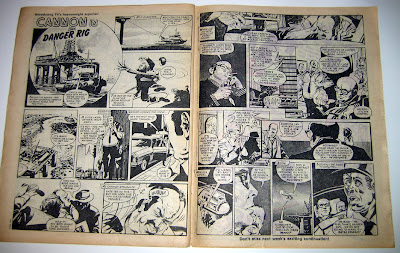 The Charlie's Angels strip was quite odd. With the T&A on display it seemed to be trying to be a cheesecake strip but the artwork was so sketchy and loose that it didn't work. 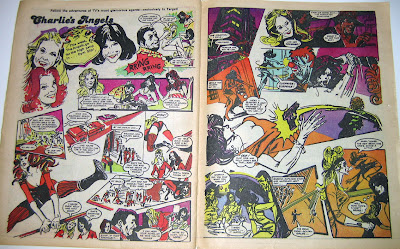 The free gift in issue one was a motorbike poster... 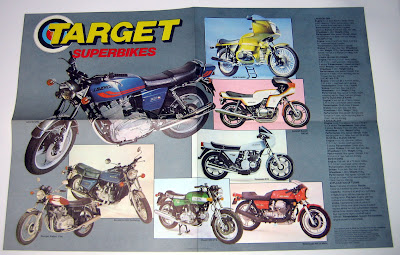 The strip that worked best for me was Hazell, drawn by Harry North. Amongst other things North had been the artist for the On The Buses strip in Look-In but with Hazell, North was indulging in gritty crime drama. As usual he turned in a superb job. Here's the three pages of episode one... 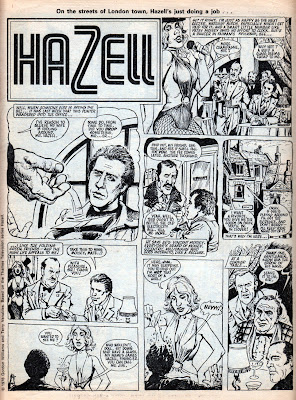 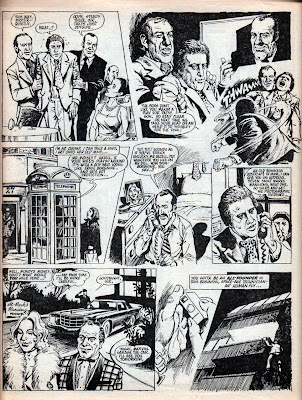 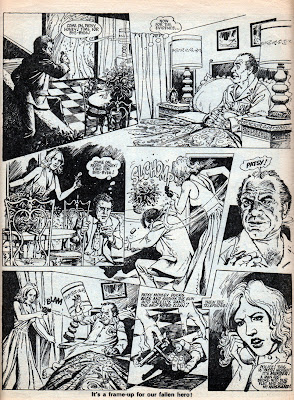 Judging from the skimpy outfits worn by the women in the strip I'm guessing that Polystyle were aiming Target at a slightly older reader than other adventure comics of the time. Sadly it seemed that Target didn't catch on with any age group and after just 18 or 19 weeks it merged into TV Comic.
Posted by Lew Stringer at 22:20

Is that David Cameron on the cover?!

I hope not. The thought of politicians using time travel is terrifying.

I actually showcased the entire first Issue of Target back in March of last year http://theyellowedpages.blogspot.com/2011/03/target-complete-1st-issue-14th-april.html . A lot of your setiments about the production values echo my own. It looked as if the artwork , though competent was later heavily colored over with felt tip pens. And I agree about the T&A :-) What virile young boy wouldn't have lapped this up! Still , the basic foundation was shaky from the start , basing your publication on fast changing fads and tv programmes. Even Cannon was old hat at that stage. Though I do remember collecting cards from a Kelloggs Cornflakes box that had images of the main characters on one side and a continuing montage of some action scene on the flipside.

Never heard of this comic before! It looks as if they put more effort into the free poster than the comics themselves!

That's what I love about comic collecting - you never know what you'll discover next!

hi lew,
great to see some more harry north work. the first mad i bought was over 34 years ago and featured harry's star wars parody artwork; star roars. i have all the mad versions of star wars and to me this was the best one they ever did. i dont understand why he was never a prolific artist in comics...

Fascinating. I bought this and about four or five issues that followed. Nicolas Ball played Hazell, didn't he? I liked that programme. I was too young though to pay attention to the salacious Charlie's Angels artwork - in fact, I probably resented having to read a female centric story! Ah, happy memories...

Wow. this comic looks incredibly shoddy, not just the abysmal colouring but the poor selection of strips.
Barely recognised Charlie's Angels on the cover !
Seems bizarre that they would want to launch something that was clearly inferior to a title already on the market (ie Look-In.)

I am wondering if this magazine is worth anything now .as I have all the issues from start to discontinue before it was amalgamated with I think TV comic or something.

Yes, I said it merged into TV Comic in my blog post. Your best bet is to keep an eye on eBay to see how much they sell for.

Apparently Hazell's setting here is "Faiman's Revuebar", ahem, and the first lady we meet is "a dancer" - but these pieces of information look like perhaps a different letterer's work from the rest of the panel. So why does she have a microphone? If I was old enough to know what a Revuebar is, and whether there was ever more than one in actual existence, perhaps I wouldn't be puzzled. :-)

Is it possible that the story was originally planned for an "adult" (in the naked women sense) magazine??

I can't imagine Polystyle venturing into the top shelf market but you're right the lettering was altered. I'm sure they intended Target to be for older boys / young adults but scaled it back a little before publication. Even so, kids at the time were watching The Sweeny and suchlike which featured similar scenes so I think they intended Target for the same type of readership as IPC's Action (itself heavily influenced by gritty movies of the day).

Presumably she has a mic to introduce the other strippers. I mean "dancers".