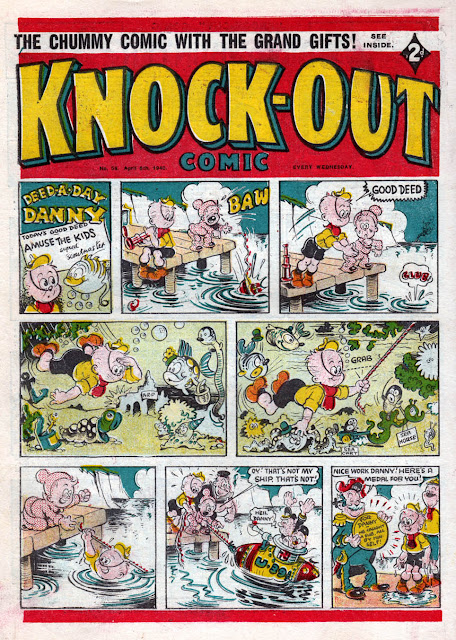 Here's the issue of Amalgamated Press' Knock-Out Comic that went on sale this day in April 1940, issue No.58. It may have been created to rival Dandy and Beano but Knock-Out had its own identity and some great characters.

The cover strip Deed-A-Day Danny was drawn by Hugh McNeill who not only had an appealing cartoon style but also filled his strips with amusing and often surreal background extras.

Inside, one of Knock-Out's biggest stars in more ways than one; Frank Richard's Billy Bunter.  The character was appearing in prose stories in The Magnet at the same time of course but would become Knock-Out's most enduring character. (The strip appeared throughout Knockout's run, and transferred over to Valiant for the duration of that comics run when the two comics merged in 1963.) The artist here is the distinctive Frank Minnitt. 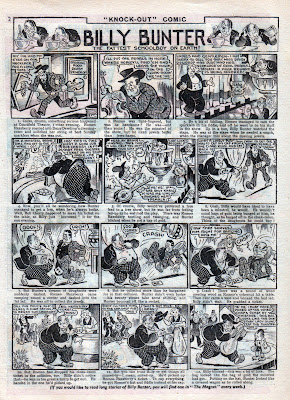 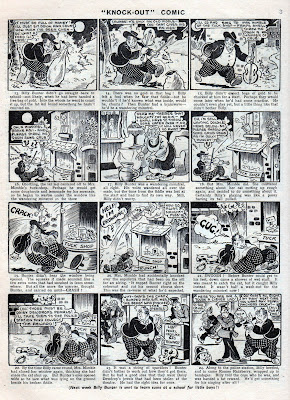 If you thought the topline on the cover suggested an upcoming free gift you'd be mistaken. Instead it referred to Knock-Out's reader's page The K.O. Flying Club and the gifts were only awarded to the members whose numbers came up. A similar idea was used in Buster (Buster's Birthday Club) in the 1960s. The strip beneath the club info is Sandy and Muddy, an appropriately wartime military fun strip drawn by Norman Ward. Amongst the strips in the centre pages was another Hugh McNeill gem; Perky Parker's Police Station. Underneath, Daddy Doolittle and Spunky, artists unknown. 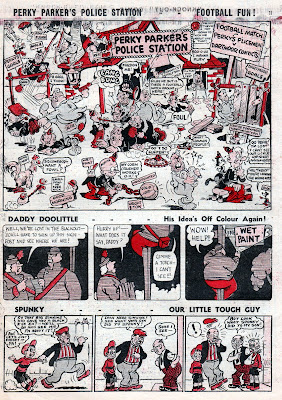 On page 13, an ad for the latest books in the Knock-Out Library, presumably prose novelettes rather than comics. 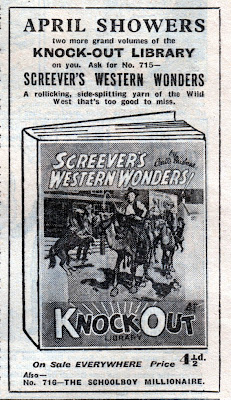 Sexton Blake was already long established as a detective in prose fiction before he appeared in Knock-Out for a long run of strip adventures. Here, Blake and Tinker encounter "Britain's enemies" that are clearly modelled on Nazis. Artwork by Alfred Taylor. 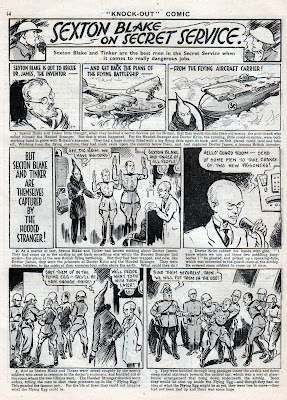 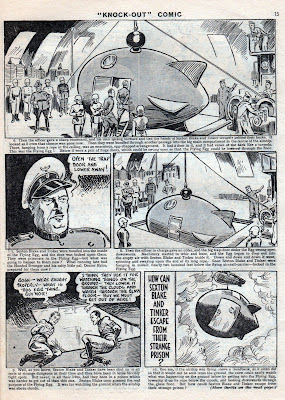 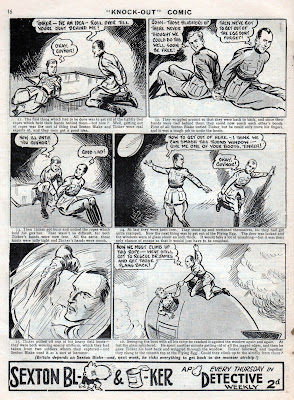 "Daft I call it!" Possibly the comic's best remembered humour strip, Our Ernie was bizarre and genuinely funny. It'll come as no surprise to know that it's another Hugh McNeill creation. 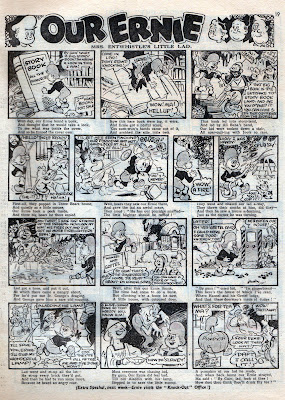 On the back page, Stonehenge Kit - The Ancient Brit, a great comedy serial by Norman Ward. 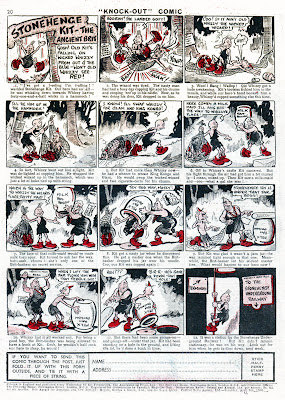 Artist information, when unknown, was obtained from Knockout Comic, An Illustrated Guide - an informative small press index on the history of the comic by David Ashford, John Allen-Clark and Steve Holland. (New printings sometimes turn up on eBay so have a search if you want a copy.)
Posted by Lew Stringer at 00:03

The Knockout Library was known for most of it's life as The Boys' Friend Library. It was re-named, presumably because The Boys' Friend itself was long gone, only a few months before cancellation.

Of course, this is 1940 we're talking about, so I assume the Knockout Library fell to wartime paper rationing. Likewise, free gifts would've become impossible around then too.

Re Billy Bunter, the comic-strip version was always a very primitive thing compared to Frank Richards' prose stories in the Magnet, which had a large cast of vivid characters and as much drama as humour.

I've heard about "Deed A Day" Danny - sometimes cited as a more wholesome forerunner to Ken Reid's "Dare A Day Davey" - but this is the first time I've seen a strip. Cheers for posting this Lew.

The KO Flying Club.
I am helping an octogenarian to sort his stuff. He has a standard membership acceptance letter for The K O Flying Club in blue ink on off white paper 6.8 in x 5.5 in. Is there a market for this?
Ian

Yes I'm sure some collectors would be very interested. No idea how much it'd fetch but it'd be worthwhile putting it on eBay perhaps?