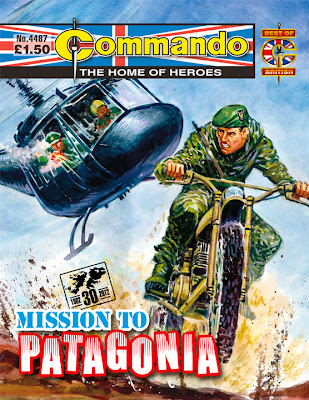 Here's the info from editor Calum Laird on the four issues of Commando that will be in shops this week, including two brand new editions.

Commando No 4487: Mission To Patagonia

November 1982, a British Geological Survey team in the Antarctic make an extraordinary find — a downed Vulcan bomber. News of this amazing discovery brings Lieutenant Nick Tarrant of the SAS to the scene. There soon emerges the story of a clandestine operation that took place during the height of the Falklands War. The top secret tale of the… Mission To Patagonia

The first  of a pair of books with a Falklands theme to mark 30 years since the war. 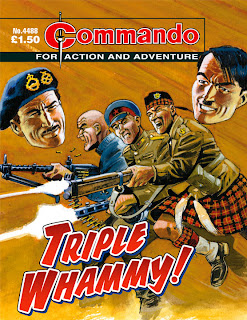 Remember the antics of Hitler and Monty…? Or to give them their proper names, Fuhrer and Field-Marshal lookalikes Max Singer and Sid O’Brien. Well, they’re back for another madcap (mis)adventure– this time involving the SS, Soviets, Scotsmen and even Scousers in South America. Don’t worry it’ll all make sense…probably.
Our death-defying doubles are in triple the danger and triple the trouble. But will this be their finest hour, or their final fling…?

Red is the colour of courage. Like the ribbon of the Victoria Cross; like the blood that heroes spill; like the famous Red Beret of the Parachute Regiment, whose amazing story this is.
Meet in these pages Cobber Kane, tough, wise-cracking Australian; Sergeant. Jim Parker, steady as a rock; “Blood ‘n’ Guts” Sanders, the hard-bitten RSM, whose one aim in battle was a VC to pin next to his MM…the kind of heroes who have made the Red Beret the badge of courage it is. 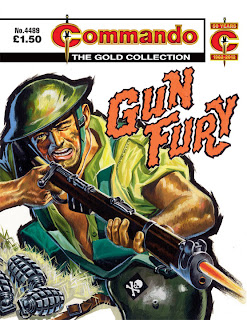 Ken Barr’s cover sets your expectations for this story. The single figure, gun in hand, grenades at the ready and with a thick black outline to throw the image out, lets you know this is going to be an all-action story. If you were in any doubt, though, the first page, by Ortiz, with its dramatic title lettering underlines the cover’s promise.
The story, penned by Elliot, doesn’t disappoint — any story where members of the Parachute Regiment capture and take over a Tiger tank has to be a winner.
And yet, it doesn’t shy away from war’s darker side. In this story good men die, friends are lost, as conflict takes its toll. And that’s maybe not what you would expect. 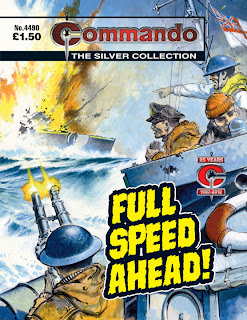 The Channel war against the German E-boats was a tough one and Andy Simpson relished the task. From the chaos of Dunkirk to the Battle of Britain he was in the thick of the action. But he had an even more difficult problem ahead of him — to admit he could make mistakes.

This is a traditional sea story, which Commando has always done well. In the aftermath of Dunkirk, Lieutenant-Commander Andy Simpson, a motor torpedo boat skipper who has to make a split-second decision — and may well have made the wrong one — must face up to what he has done, however difficult this may be.
Artist Keith Shone’s thick black lines are reminiscent of the style of our Spanish veterans, like Manuel Benet, for example. While Jeff Bevan proves once again that he was king of the sea covers — with those pale, watery colours offset by a striking explosion.

Falklands war? Or the occupation of the Malvinas as some of us would call it. Will the Commando book give us a balanced story? Maybe that union jack on the cover suggests no.

Is this the first political bomb to be dropped on your blog, Lew?

I don't recall many Germans commenting on WWII Commando comics despite 'us' giving those Jerrys a jolly good thrashing.

I suppose the Falklands war is fresher in the memories now than WW2, and especially with it being in the news again recently.

'Juanonamous', I haven't seen that issue of Commando yet so I don't know how balanced it is but I would imagine that as with many Commando comics the story will be about the heroism of the individual and will distance itself from being a propaganda piece. As for the Union Jack on the cover, that's a standard masthead for the 'Home of Heroes' issues of Commando now. Every fourth issue is like that.

Pathetic that someone has to get their pants in a twist over a story set in the British Falkland Islands.

It's always going to be a controversial subject.