On sale exactly 44 years ago in the very same week as the issue of Lion shown in the previous post was this edition of TV21. Of course, as it was the coolest comic on the stands it was dated 100 years ahead, May 4th 2068.

By this time in TV21's run, Captain Scarlet had become a large influence on the comic, with the Spectrum logo becoming part of the masthead and different colour themes for each cover. The great Mike Noble illustrated the cover and the following three pages of the Captain Scarlet strip. You'll note that the cover headline proved to be quite alarmist in the end but it was a good way to hook the reader! 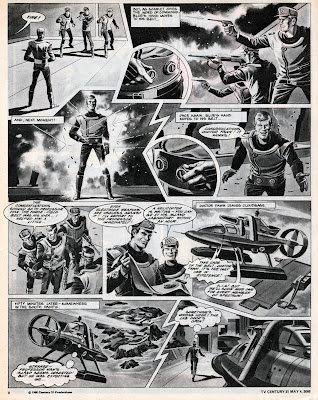 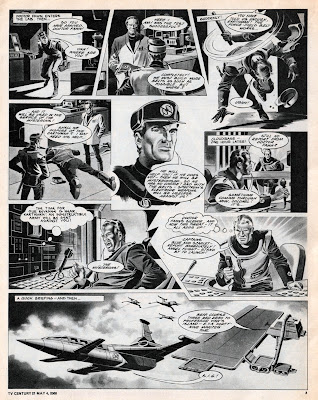 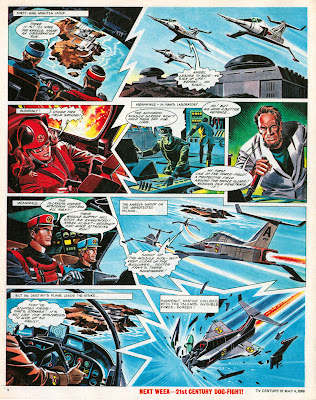 The other main draw in TV21 at this time was Thunderbirds, illustrated by Frank Bellamy. Originally three pages when it debuted in 1966, the strip had reduced to two by 1968 but Bellamy's dynamic artwork was still worth the cover price alone. (Although personally I found the style too heavy when I was a kid and always preferred Mike Noble's pages.) 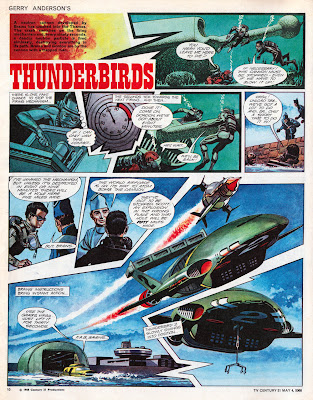 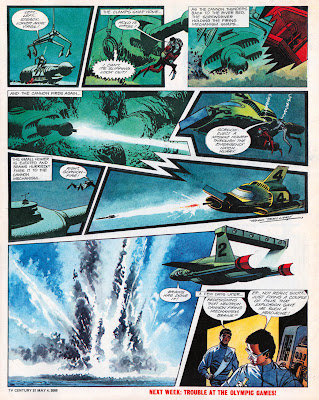 Other strips this week included ex-Agent 21, Mr.Magnet by Rab Hamilton, with the strip going through a silly phase where Agent 21 had gained magnetic powers. Stingray, once TV21's main strip, had now been reduced to a page and a half in black and white, and, with Mike Noble busy drawing Captain Scarlet, Zero X was now drawn by Jim Watson... 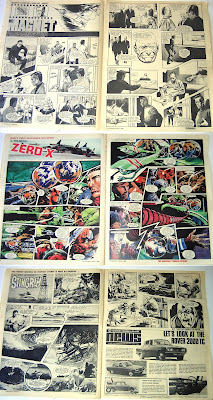 Want to see some advertisements from that issue to put it into its sixties context? Here's the latest incentive from Lyons Maid for their Zoom ice lolly. A straightforward but attractively designed ad...


...whilst Kellog's Corn Flakes were featuring cut-out 'National Costume' models on the back of their boxes. I'm afraid it seemed a bit too educational for me back then and I went for Sugar Smacks and its free Captain Scarlet badges...

TV21 was the defining comic of my childhood. Great to be reminded of it - and I probably still have this issue in the box in the attic!

I always felt doing Comics based on Puppets was very hard on the artist. One people is one thing, Animation another, but Puppets.. I've seen alot of Muppet Comics where.. the artwork was alright, but they didn't really look right.. You only knew it was Kemit because he was green etc. But TV21 and related takes on Thunderbirds, Captain Scarlet etc, always seam to come off pretty well.

I think it worked for TV21 because A)the high quality of the artists and B)the artists were encouraged to make the characters look more like actual people rather than imitate the puppet proportions.

I'm sure that if it was being done today there'd be middlemen in licensing nitpicking the art because the figures DIDN'T look like puppets, but back then wiser heads prevailed.

Absolutely. For me as a kid, it was really important that the characters were drawn as real people because that's how I saw Scott Tracy, etc, in my imagination.

Years later, in the early '90s, I got to write all the Stingray, Thunderbirds and Captain Scarlet books and I hated that the publishers insisted on the artists drawing the characters with oversized heads and stiff poses.

The puppets in Captain Scarlet were actually much more realistic than in Gerry Anderson's earlier series. I've read that he was always bothered by the oversize heads, and someone finally came up with a solution.

The way TV21 re-imagined Thunderbirds et al was way better than later Anderson tie-ins. Definitely a landmark title, although I felt it started to slide with the arrival of Captain Scarlet, despite the great Mike Noble art. Preferred 'Agent 21' as the 'editor'!

Yes, I think the Spectrum stuff was over-done really, although I'd guess sales needed a boost so they basically turned it into a Captain Scarlet comic (and "with Gerry Anderson's Captain Scarlet" becoming part of the logo).

When I was a kid I had TV21 throughout 1965 then dropped it for SMASH! in '66. I didn't buy TV21 again until April 1969 so I missed all the Spectrum themed issues. (I luckily gained an almost complete near-mint set of TV21 years later though.)

They've admitted they've had problems with their renewal system and have promised to send me the three overdue issues this week. Let's hope they do.

I have acquired some issues of TV 21 from around this time and an annual from 1969 possibly? Newspaper design on the covers?

Lew, any chance of you running an item on Spike comic from the eighties? That was one of my favourites.

I'll run an post on Spike one of these days! I know I've promised that before but I'll get around to it. :)