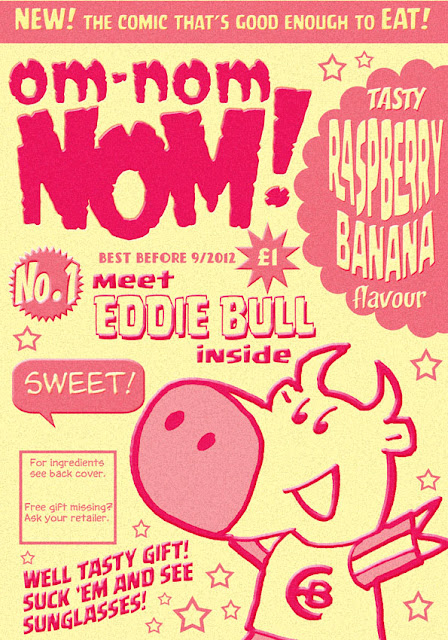 Yes, as most of you realised, yesterday's post about the new edible comic Om-Nom-Nom was an April Fool! The comic that was to star Eddie Bull and Noisy Rooster was, as indicated, nothing but a cock and bull story and the cover was something I threw together in Photoshop using some excellent fonts I purchased from those kings of calligraphy at Comicraft. Sorry about the deception, but I hope you had a smile over it. My thanks to those of you who joined in with the fun.

I wasn't the only one indulging in pixilated pranks. Over on George Shier's blog Wacky Comics he and Harry Rickard put together a tale about long-lost 1960s comic Fighter, complete with fake covers. Don't ya wish that comic had existed? 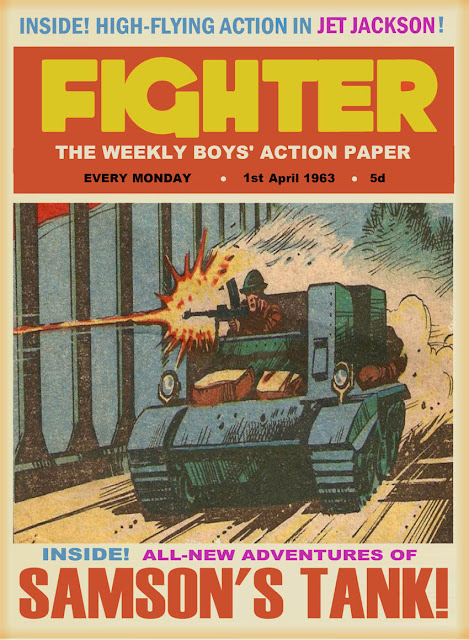 Harry Rickard also posted an April Fool on his Wizzo Comic website to announce the closure of his small press comic. There were a number of other comic sites having a jape too, as Bleeding Cool reports and Terry Hooper's blog announced a new IPC comic Countdown to Action.

I previously posted an April Fool on my blog back in 2008 when I featured Apollo comic. I'll probably give it a miss from now on otherwise I'll start coming across like some office prankster that people want throw through a window.Normal service is now resumed. 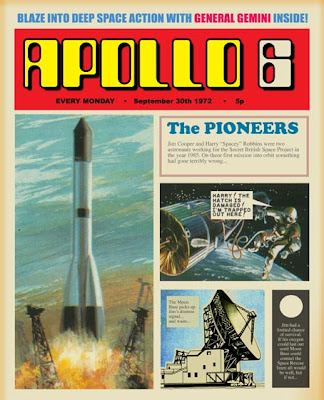 Bah, I genuinely believed this one! The only April Fool's joke this year that genuinely fooled me. Well played, Lew. (I wish it was real!)

Main problem i found with your joke was.. it had been done for real. There has been comics printed on Rice Paper. Of course, one of the weirdest (i think) is the Marvel Hulk and Spider-man comic that was printed as Toilet Paper. Personally, trying to sell an original marvel comic story as 'Good enough to wipe your arse on' isn't a good move. Also, very bad quality print.

Though it did get me thinking back to a long list of forgotten British comics (I know the US did them too though) which came as freebie promo items with sweats and the such. Mostly uncredited writers and artists, and very much made to sell the item you had just brought, but some were pretty nice.. Also, before the changed to the late 90s packet, the old Space-raider snacks had a comic story on them.. So did Transform-a-snack.. Ah, the amount of food items with free comic strips and stories.. and yet, how many of them do we know much about today... Writers and artist names are forgotten as are the comics.. but just cause there were cheap promo items, does that make them any less a part of the British comic scene?

Part of the joke was that it had elements of truth to it Manic, so that people might believe it. For example there was Batman bubble gum in the 1990s that had images printed on them.

I've heard of that.. Bubblicious Gum did some.. I'm not quite sure if they did some Batman ones but it wouldn't suprise me. Jokes do work best if there is something of truth in them so.. I guess i'm someone that doesn't fall for jokes easily? Can't say I don't fall for them though..

Oh, i'm Not sure on the legal side of this site (looks like he/she is SOMEHOW able to legally sell some things, but this blog has a page talking a tiny bit about the Space Raider comics ^_^
http://sweetlywrapped.blogspot.co.uk/2011/03/another-little-bit-of-nostalgia.html
When is a Book on British Snack comics gonna come out?

Hahaha I have to say you got me with this one too, hook, line and sinker. I came thiiis close to telling my son about it, but I thought I'd wait until I had one as a surprise. Lying in bed last night reading Strip and it suddenly hit me, "Bastard" I exclaimed, waking up my gf. Such a shame it would be his perfect comic.

You do realise you now owe us an edible comic, maybe a special Suburban Satanists???

Haha anyway thanks for the smile

I was out with some mates telling them all about this comic.i asked where there was a newsagents so i could buy one. I even went into the newsagents and asked the shop keeper for the Om Nom Nom comic. She said it probably hadn't come in yet. I was gutted. Nevermind, I don't even like banana flavour :) Brilliant Joke Lew!

Glad you took it in good spirits! :)