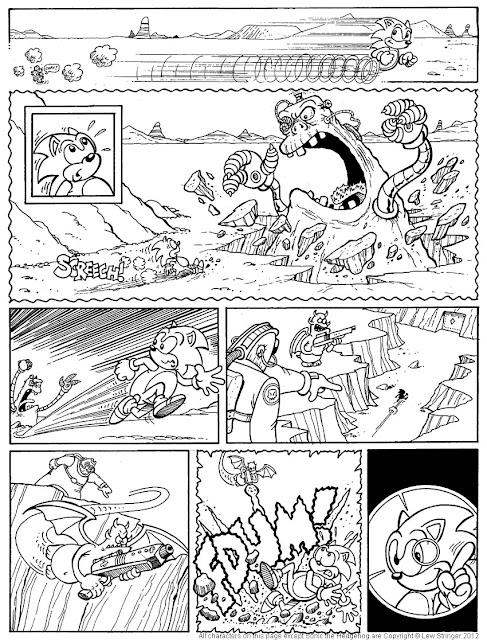 Back in 1993 when Fleetway Editions launched Sonic the Comic I thought I'd send them some art samples to see if I could be assigned a job drawing the strip. Editor Richard Burton turned me down on the basis that my style wasn't quite what they were looking for. He was right of course, as the approach they were taking was closer to an adventure comic style. Although I'd tried to move away from the traditional humour comics elements with my sample pages the Buster influence was still evident.

Initially I was a little disappointed that my pages were rejected but it turned out fine as Richard offered me work as a scriptwriter on the comic instead. I was used to writing my own material and had written scripts for Oink! but adventure comics were a new challenge. Nothing too heavy was required though. The required tone was for light adventure with elements of humour so it certainly sounded like it'd be a fun gig. My first script appeared in Sonic the Comic No.30 and I became a regular writer on the comic not long after that for the rest of the title's run. (Or until reprints shoved me aside anyway.) I really enjoyed writing scripts for such brilliant artists as Richard Elson, Roberto Corona, and the great Mick McMahon. 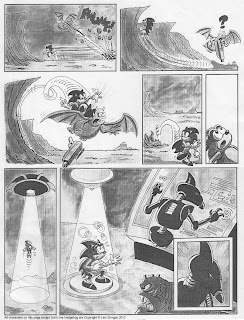 Sorting through some artwork the other day I came across photocopies of the two Sonic sample pages I did 19 years ago, so here they are. The second one was done in full colour but I'm afraid I only have a black and white copy to show here. As you can see, my version of Sonic isn't quite "on model" so I think the editor made the right decision. Also, rather than use Doctor Robotnik or his Badniks, I created my own villains. I'm still quite pleased with the design of them although they're not really in keeping with the Sonic universe so, again, it's understandable that the pages were rejected.

Anyway, I hope you get a kick out of seeing these never-before-published pages!

More info on my Sonic the Comic work on this website:
http://www.tesp.co.uk/TESP/Interviews/LewStringer/LewStringer.htm

Email ThisBlogThis!Share to TwitterShare to FacebookShare to Pinterest
Labels: Sonic the Comic

Actually Lew , I think it's quite good! Your perception of depth and your command of expression is exemplary.No wonder the editor took you on. Well done,

Thanks, although as I said the editor didn't take me on as an artist. He employed me as a scriptwriter though so it turned out fine.

I quite like that too. Alot more on Model then some artist have drawn him over the years.. For some reason, Archie Comics version of Sonic, apart from being a big mess of a continuity errors (The Comic started off being on the soon to be released cartoon, that was very much a humour cartoon, within a couple of years, it became alot more serious and alot of the humour stuff was pushed aside and never touched.. and then it got worse ¬_¬ but oh well, personal taste) mostly seams to have some.. not as on model artists. Your work would have looked great along side the work down on the early issues by greats like Scott Shaw! and Dave Manak.

Actually, the enemies you created in the second page look similar to an early concept for the first Sonic game, before the Robotnik/Evil Robots concept was fleshed out. If your Sonic had dropped a few pounds it would have made for an interesting series

Yeah, from what I've seen of the early issues of the American version, your style would have fit in perfectly there. Perhaps you missed a trick!

Believe me, I've no regrets about not getting a drawing gig on Sonic. I enjoyed writing the stories but DRAWING licensed characters with the license-holder continually looking to nitpick "off model" bits isn't my idea of fun.

hi lew,
i read your interview about your writing stint on sonic. i found it interesting that on several occasions you said you could not remember specific details, it reminded me of james murdoch on the leveson enquiry this week.