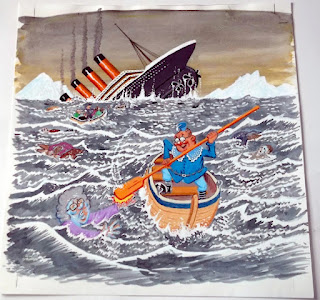 I've a lot to mention and I'm short on time so here's a quick runaround of half a dozen items packaged into one convenient post.

I'm selling off a few pages of my old artwork from Viz and Buster. (No pages from Toxic, Beano or Dandy I'm afraid. I don't sell those.) Fancy an original Tom Thug page, or a Viz calendar page with a Titanic theme? Zip over to my eBay page and check out what's on offer and help pay my mortgage. Bidding ends on Sunday. Thanks in advance! 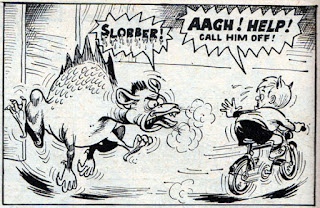 For 45 years comic fans have wondered who the artist of Nobby's Nightmares was in Pow! comic. Some said it was Cyril Price (not even close) whilst I suggested it might be Walter Bell (miles off). This week, cartoonist supreme Nigel Parkinson (like the Dalek supreme but taller and with a sense of humour) checked out his ex-file copies of Pow! and discovered the artist's name was Lewis Williams, revealing it on the Comics UK forum. No, I'd never heard of him before either, but we have now!

Mr.Williams also drew Georgie's Germs on occasion for Wham!, along with Mini-Maxie for Smash! (although apparently the latter was a reprint). Thanks to Nigel for clearing up the decades-old mystery! 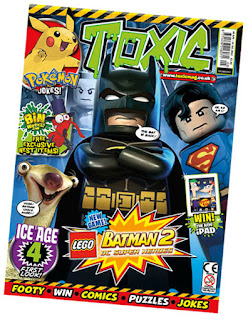 This week's issue of Toxic features a survey form for readers to vote for what they like, and dislike, about the UK's top selling boy's mag. A section spotlights my Team Toxic strip and asks readers "Do you like Team Toxic" (Yes, No, or Haven't heard of them.) With options like that I suspect some kids will tick "Haven't heard of them" just for a laugh, so if you do read Toxic and you do like my work I'd appreciate your votes. The strip is already down to being a reprint every other issue so every vote counts.

School's out for summer

Sadly I've heard this week that my Super School strip is being rested from The Beano. I don't know if it'll return, but it's been great fun drawing it and fulfilling a dream to work for that comic. I think I drew about 70 over the past few years and Tom Paterson filled in on a couple. They still have a couple unpublished so they may turn up as fillers in the future. Thanks to all of you who wrote to say you enjoyed the strip and to those of you who voted for it, giving it an impressive vote count on its debut according to the 2008 Beano poll.

Editor Joel Meadows is seeking crowdfunding for the publication of a special anniversary issue to mark 20 years of his comics and media magazine Tripwire. The book will feature specially commissioned artwork from people such as Howard Chaykin, Glenn Dakin, Mike Kaluta, Mike Perkins, and Jon Haward and Nigel Dobbyn amongst others. You can find out more info in John Freeman's report on Down the Tubes.

I hope your work will come back to The Beano.what a shame about Super School as the image above shows..its a shame..
Oh well back to The Dandy to enjoy your work..

Thanks Peter. I'm hoping my new strip will start in The Dandy next month, although it's only a six week series.

What?! This is so stupid - sorry, Lew but The Beano really have messed up - they get rid of a popular strip after what seems to be a two year hiatus - it topping the 2008 poll - and by a landslide!

Yet they continue to cram more reprints into the comic. We now have Roger the Dodger, the occasional Retro Beano, Number 13 (Beano Street) and (Totally Gross) The Germs - plus the latest addition: Bananaman. What was the point, all it did was add another reprint to the ongoing pile-up.

The Beano is in desperate need of a dramatic revamp. And it needs one fast.

Much appreciated Harry, although to be fair to The Beano they have to work to their budget and reprints are an unfotunate necessity these days. With limited space for new material they're obviously going to devote it mainly to the core characters, - Dennis, Bash Street, Minnie etc.

lew,
so, every other issue in toxic is a reprint of yours, is this same for other stuff in toxic?
also, reprints in beano.
are regular readers only a small core of these comics? are they just an occasional or impulse buy in a supermarket these days, mainly for the free gifts?
there is a joke about a kid getting a gift in a box at xmas and he throws away the gift, but plays with the box instead...

No, the other strips in Toxic are brand new. The money saved by reprinting my old work helped to bring in new characters. Team Toxic has been running for 10 years so the assumption is that the first Toxic readers are no longer buying it, so the reprints would seem brand new to them.

On the plus side there is some compensation for me in that some issues feature an 'I-Spy' double page spread that I draw. Colouring one right now in fact.

Nice pin-up of the super kids,a great piece of work.

Thanks Nigel! (And if anyone reading this hasn't already done so, check out Nigel's superb Banana Bunch centrespread strips in The Dandy!)

Only just realised Beano had dropped Super School. Idiots. So, they've got rid of Derek The Sheep, me, you, all the need to do is fire Hunt and Laura and they've returned The Beano to the state it was in in 1999. Minus the readers, obviously.

Officially it's just being rested while they try something else. Hopefully it'll return eventually. I'm sure Bananagirl, Stinkbomb, etc won't be allowed to fade into limbo. Alan Digby created some fun characters there and with the popularity of superheroes now I think Super School has more potential. Time will tell.