The poll results are in 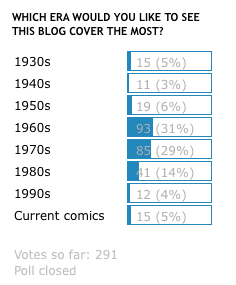 As you know, I've been running a poll on the sidebar of this blog for the past three weeks to determine which decade of comics you'd like to see featured the most on this blog. The poll has now closed and the winning decade, with 31% of the votes, was the 1960s, with the 1970s a close second with 29% of the votes.

This is fairly much as I expected, and I'm pleased to see the 1960s win as that's the era of old comics I have the most issues of, and it's personally my favourite era too. The full poll results were as follows:

I was surprised to see the 1940s receive such a low vote but all the decades will continue to be featured here, albeit more proportionally to reflect the results. As the poll was to determine what readers would like to see the most of I'm presuming that everyone would still like to see every decade reflected to an extent.

A few 1930s comics will be posted in the 'This week in...' feature over the next few weeks, as I have a handful of issues from the same year, but after that I'll feature the 1960s and 1970s more often. I'll also be swinging the spotlight on the 1980s a bit more, as that decade received a fair number of votes too.

With current comics only receiving 5% of the vote I won't be spotlighting those as often. Plugs for Commando will continue as I receive press releases from DC Thomson, and I'll continue to promote some other titles - and my own work. (Hey, it's a perk of it being my blog. :)) However, there are several other websites and blogs which do a great job of promoting current comics far better than me, so check out the Forbidden Planet International blog, the Down the Tubes blog, and the Speech Balloon blog for three good examples.

The voting system seemed fair. It remembered the IP of the voter so he/she couldn't multi-vote. Hopefully the results are an accurate representation of what your tastes are. Thank you to everyone who voted and I hope you continue to enjoy this blog in whatever period it plunges into on its random journey through the Comics Time Vortex.

On another subject, you may have noticed that the stat counter for this blog now reads at over a million hits! Obviously that's not a million different visitors, nor does it mean that a million people are eagerly following my posts. (For example, a random Google search for a comic title, image, or theme would lead some to the blog, and they might only stay a few seconds before realizing the info isn't what they were looking for. Thousands of hits a week on a blog doesn't mean that thousands are hanging on one's every word. Far from it, and some bloggers would do well to remember that before they try to demand free books from publishers for review purposes.)

However, for the 319 of you who are following Blimey! and all of you who have dropped by over the past five and half years, thanks for your time. I hope you've enjoyed what you've found and will continue to visit in the future.

Do you think the poll gave a rough snap shot of the age range of your readers? I know I voted for the 80's because that was the era I grew up with.

Interesting results, though not completely unexpected..

You said "It remembered the ISP of the voter so he/she couldn't multi-vote so hopefully the results are an accurate representation of what your tastes are."

ISP dont you mean the IP of the user?

I am sure the ISP (Internet Service Provider) would not be an accurate measure of someone multivoting as more than one user could easily get their internet from the same ISP such as BT, Sky and TalkTalk (I used google to find these examples).

You're quite right Anon, thanks. I'll correct that typo (and a couple of others I've just noticed).

Manic, I doubt there'll be a big fuss, or much of a fuss at all, considering the British public's indifference to comics, but we'll see how things go.

Steven, yes to an extent, although some have said that they voted for eras before their time so I don't think everyone was motivated by nostalgia.

Congrats on passing the 1 Million mark , Lew! Here's to the next Million !