Flashback to 1973: DOCTOR WHO HOLIDAY SPECIAL


Doctor Who had been on TV for ten years, and a strip had been appearing in comics for almost as long, before he was awarded his first Summer Special in 1973. This Doctor Who Holiday Special was a 48 page publication (of which only 8 pages were in full colour) and was released by Polystyle Publications at a price of 10p.

Polystyle had been running a weekly Doctor Who comic strip since 1964, first in TV Comic before the strip transferred to the new Countdown comic in 1971 (which was renamed TV Action in 1972).

Back to 1973, and this Holiday Special, which kicked off with a rather dark publicity photo of Katy Manning, Jon Pertwee and Roger Delgado from the Doctor Who TV story Frontier In Space. Inside, an introduction allegedly written by Jon Pertwee (as himself, not in character) and then the first strip, an appropriate holiday theme story entitled Fogbound, with some good character likenesses from Frank Langford... 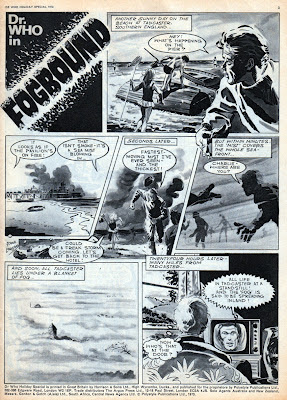 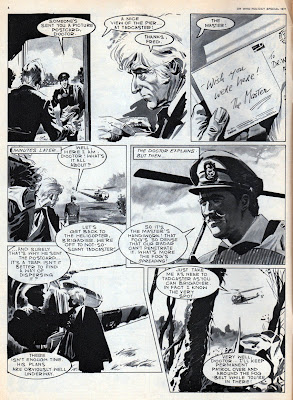 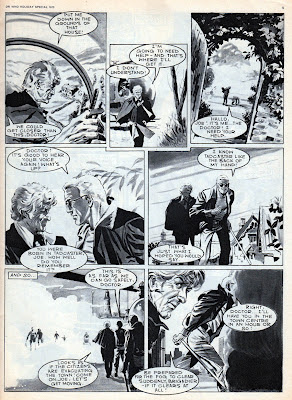 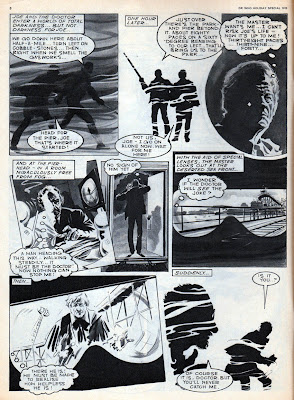 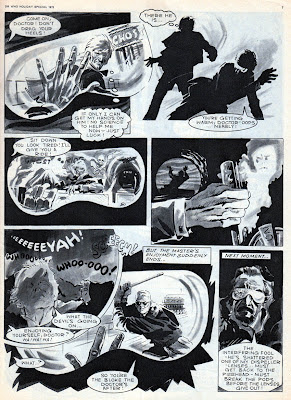 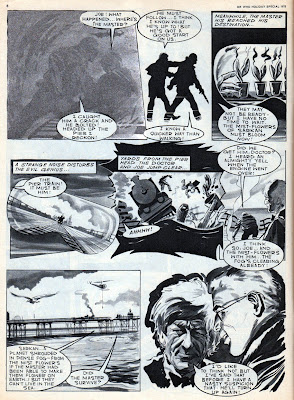 Incidentally, that first panel of the last page was so darkly reproduced in the comic it was almost an all-black panel! I've tried to lighten it up as best I can but the figures are still barely visible.

The Doctor Who Holiday Special had a very good balance of strips, features, puzzles and pin-ups. I make no excuses for showing this one of the stunning Katy Manning...

Six pages of the special were reprints of The Daleks strip from TV21. Although edited and in greyscale rather than in their original full colour, the artwork by Richard Jennings still packed a punch. 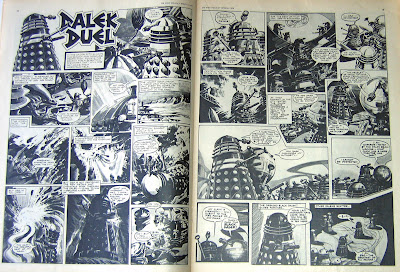 One thing I liked about comics of this era is that their articles didn't particularly dumb down for their readers. Here's a well written feature on The History of Doctor Who from the Special... 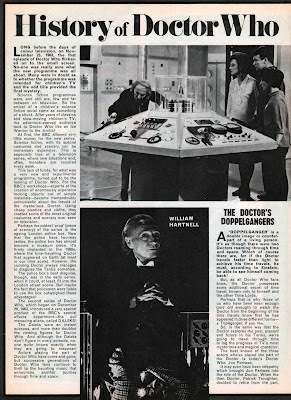 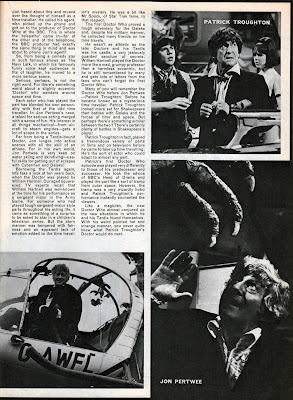 ...and a fascinating behind the scenes feature, produced as a photo-strip... 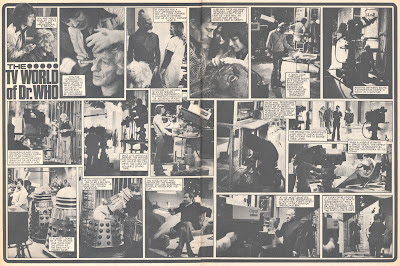 As a bit of light relief there was one humour strip, Spiggy Space Bug & Spog. The characters appeared again in the following year's special. Artwork by Peter Ford... 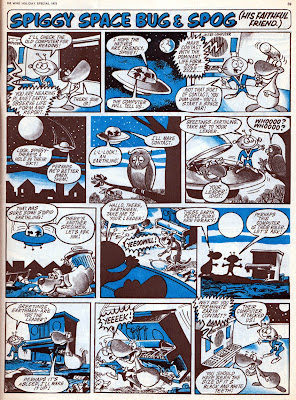 The Master turned up again in a Doctor Who prose story, Smash Hit, but in the strip that closed the special, Secret of the Tower, the villain is someone called 'Hingrad', whom The Doctor calls "The greatest thief in the universe... also a master of disguise". In fact 'Hingrad' is so similar to The Master, except in appearance, that I suspect in the original script it was The Master but perhaps artist Alex Badia wasn't sent sufficient photo reference to do a good likeness of actor Roger Delgado? 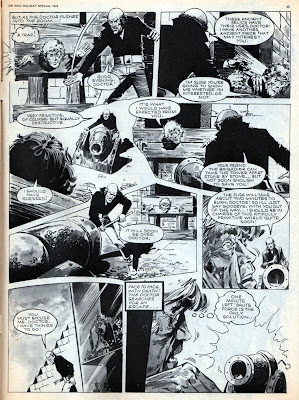 Holiday Specials often featured a board game for rainy holiday afternoons and this edition featured A Dr.Who Dice Game across its centre pages. You had to supply your own dice and counters though, necessitating a quick rummage through the boxes of your Haunted House or Fastest Gun games. 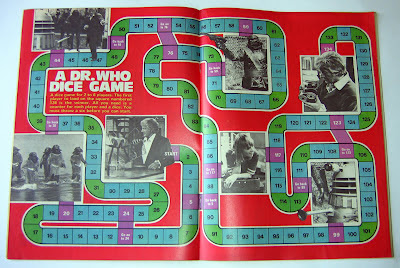 On the back page was an advert for TV Action, which hopefully inspired casual buyers of the Holiday Special to check out the weekly. Sadly not many could have done so, as TV Action merged into TV Comic in September of 1973, taking the Doctor Who strip back to its roots, - at least until Marvel UK acquired the license in 1979, launching Doctor Who Weekly (renamed later as Doctor Who Monthly / Magazine) where it continues to this day! 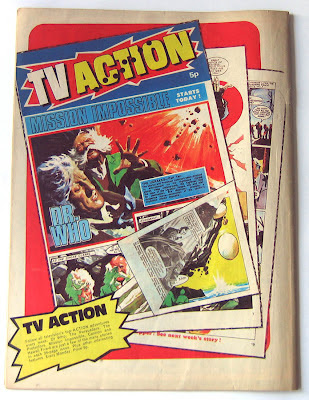 Ah , the old reliable roll the dice boardgame.Amost every comic and Special and Annual seemed to have one. Remember one comic giving very indept instructions on how to construct the game. Carefully cut and keep part 1 of 4 parts and glue onto a hard cardboard surface. Same for markers and buy a dice to play HA HA! Great times. Wonder if anybody actually played these boardgames ? I have to admit I can't recall ever having done so , at least not all the way through , perhaps becoming bored after 3 seconds. Yet perversely , I know have started to appreciate them a little , for their artwork and for the obvious thought some member of staff put into them.

I remember playing a couple of the board games from The Dandy Summer Specials in the sixties. I wouldn't have played this Doctor Who one though as I was 14 by then.

Most kids already had some board games in the house so finding a dice wasn't too difficult, and sixpenny bits (or, later, 1p coins) could be used as counters.

Thanks for posting this, I enjoyed reading the 'Fogbound' comic strip. I like the old nearly-but-not quite Doctor Who strips (I don't recall seeing this one reprinted in DWCC)

Yes, Polystyle didn't quite "get" Doctor Who sometimes but they still produced an entertaining version of it.

I don't think Classic Comics reprinted the strips from the specials, but I could be mistaken.

Don't you just love finding things you used to own but had completely forgotten about? If you hadn't named that artist as Alex Badia, I would have sworn it was Romero. The style looks so like Modesty Blaise.