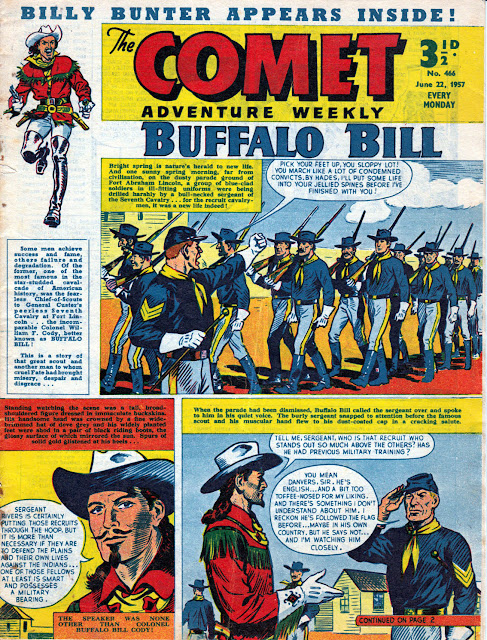 The Comet, published by The Amalgamated Press, underwent a few format changes during its 13 year lifespan (1946 to 1959). Initially it was a tabloid comic, but in the 1950s a number of British publishers began approximating the popular American comic book size, and The Comet also adopted that format. From the time this issue saw print, this week in 1957, The Comet had 16 pages 185mm wide by 240mm high. Four of the pages were in full colour (using the three colour dark blue/red /yellow process, but no black) with the rest in black and white.

The cover feature at this time was Buffalo Bill. Westerns were a popular theme in the 1950s so it made sense to follow suit, with Buffalo Bill given a complete seven page story every week. I'm not sure who illustrated this story though I'm afraid. 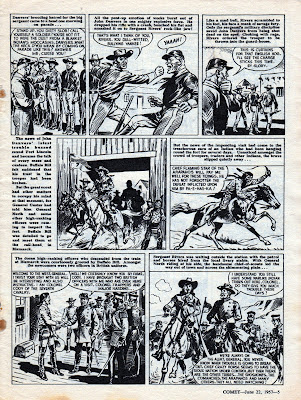 Billy Bunter had a two page strip in The Comet at the same time his strip was also running in Knockout. 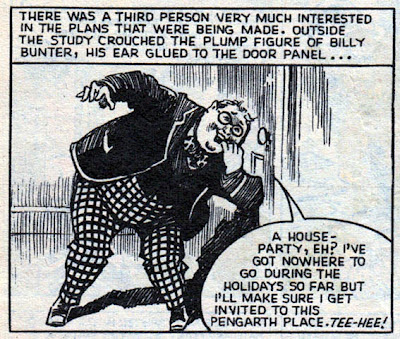 The centre pages ran the historical serial Claude Duval - The Gay Cavalier. (No sniggering at the back there.) The artist Patrick Nicolle is credited by some sources as the artist of this strip but the heavy brushstrokes of this episode don't look like his work to me. Perhaps a fill in? (UPDATE: Possibly by Fred Holmes?) 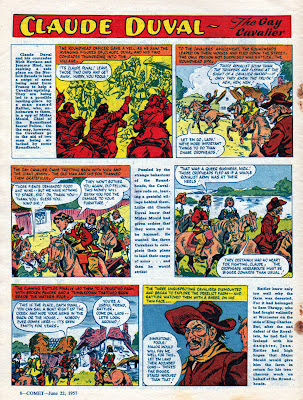 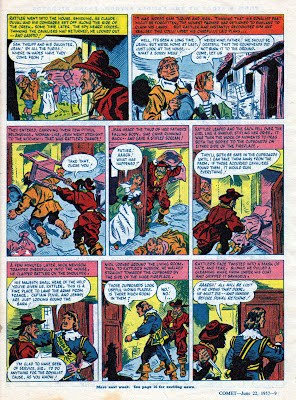 Jet Ace Logan became a popular character of the era, and later moved to Tiger when Comet merged into it in 1959. Some solid work here by John Gillatt, who had a long career illustrating various strips for Fleetway and IPC such as Football Family Robinson and a long run on Billy's Boots. He was also one of the artists on Scorer for the Daily Mirror. 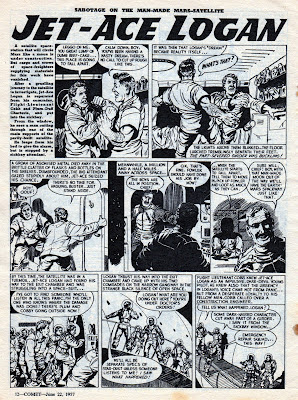 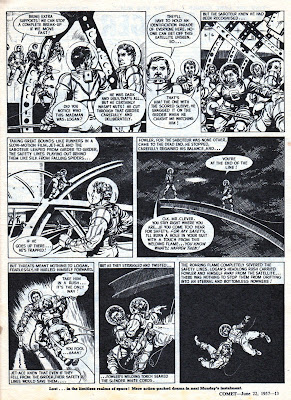 The Comet also featured a Lone Ranger strip (possibly a reprint), again capitalizing on the Western craze. On the back page, the only light relief in the comic , the Chuckle Club joke page, with a 10 shilling (50p) prize for every joke published. At the foot of the page is a "Great News, Readers" announcement of a new look for The Comet, which from next week would drop the cover strip in favour of a painting. 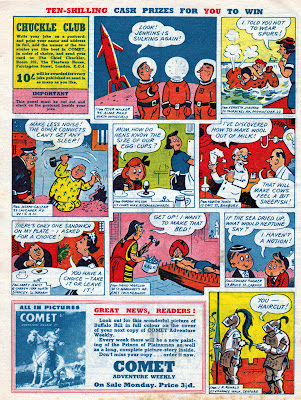 The Comet was presumably aimed at an older reader than most British comics in that the stories featured considerably more text and dialogue than, for example, The Beano or even Eagle. Perhaps this was A.P.'s way of making it seem more literate, defending the comic from the mood of the times which had become suspicious of comics due to the fearmongering whipped up by the anti horror/crime comics campaign. Sadly, the fact that the comic folded two years later might suggest it backfired and that the verbose tales put off the audience they were trying to attract. If anything, comic storytelling of the time was becoming more streamlined, and the heavy word count that The Comet featured was going against such developments.
Posted by Lew Stringer at 13:01

That Claude Duval episode looks like the work of Fred Holmes. Eric Parker also drew the strip as well as Pat Nicolle.

I wondered myself if it might be Fred Holmes, although it looks a bit cruder than his Carson's Cubs strips. Then again, this is from ten years earlier so his style could have been a little more raw, or it may have been rushed if it was a fill-in.

Carsons Cubs!! Have you ever blogged about LION comic Lew? That was one of my comics every week. I would love to see some of those again.

Yes, I've featured Lion a few times. Simply type Lion in the search window at the right hand side of this blog and you'll find a few results to choose from. Hope that helps.

Again, in English please. What is a search window?

Interesting that Billy Bunter is a headline name on it. Like you said, he was appearing in two comics at the time, which probably means he was very popular (well.. no doubt) but I don't really see it also fitting in with the subtitle 'Adventure Weekly'. I might be wrong, but I never took Billy Bunter for an adventure strip. And I know that just cause it's an adventure comic, doesn't mean every strip is adventure, but it seams odd that the comic is selling itself as an adventure comic, but then being quite big on the fact it's starring a non-adventure strip..

Might just be me, but I think that's quite interesting.

Billy Bunter was an adventure strip serial in those days, closer in style to the original prose stories than the later slapstick comedy strip it became.

The character also featured in a popular TV series at the time so no doubt A.P. were trying to help Comet's ailing fortunes by putting it in there even though he was also in Knockout.

Point. Can't say I have really read much Charles Hamilton, or Frank Richards, or Peter Todd or anyother name he used.. I did hear that Hamilton started to make the character more comedy based himself, over time, but, like I said, I haven't really read much of his work, so i have very limit knowledge of the character or anything..

I guess the TV show angle would very much help them.. even today, Comics with TV angles seam to do much better.. Sadly, (though i'm not saying any today are) too many TV tie-in comics seam to completely lack the Style of the TV show they are based on.. That being said, I understand, but was a bit dispointed with the Look-in collections missing SOO many TV tie-in strips I would love to own... but this is drifting a bit ^_^

I think that Billy Bunter strip is the work of one-time Ally Sloper artist Charles Henry Chapman who would have been well into his seventies at that point. Believe it or not earlier episodes were drawn in an even more dramatic style by Reg Bunn, who later went on to illustrate the Spider for Lion.

There was also a lot of Bunter nostalgia in the 50's, from people who grew up reading The Magnet pre-war. Charles Hamilton came out of "retirement" and wrote a series of stories in book format, as well as further short stories in the likes of The Wonder book of Comics.
Billy Bunter was generally the comic releif in the Magnet stories, but the overall tone was more towards adventure. What did happen over time was Bunter featuring heavily in every story, as he was the most popular character. The very last complete series of stories (in The Magnet, that is, April-May 1940) features an escaped criminal and German spies prowling the district around a house in which several boys are on holiday, for instance.

Oh yeah, also this is a useful post for further modifications to my big history article. I didn't know much about The Comet and only own one early issue, but it was pretty important, being one of the first really regular mostly-strip adventure comics after the war.

Thanks Mike. Was The Comet an adventure comic from the outset? If so it'd pre-date Eagle, which would be interesting.

I think it was mixed humour and adventure to begin with, in the style of all those short-runs and one-shots, though it was more reliably and regularly published. I'll have to dig up my one copy, it's in an envelope somewhere!

I still re-read those 'Jet-Ace Logan' strips with pleasure, David Motton scripted some fine tales with John Gillatt as the perfect illustrator. This is what set me off reading SF novels as an adult...