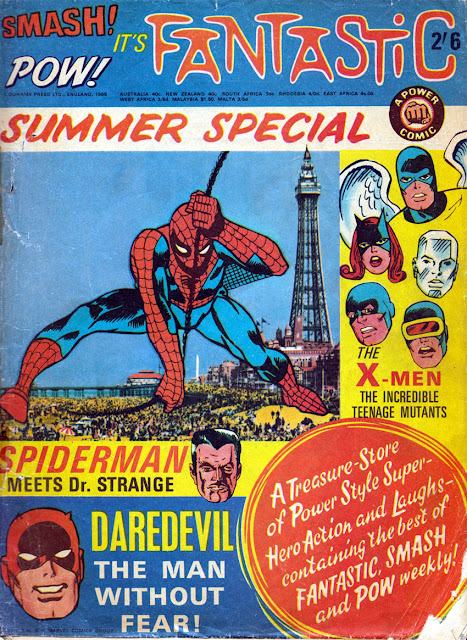 The Odhams era of 'Power Comics' (Wham!, Smash!, Pow!, Fantastic, and Terrific) ran for just under five years in all, from June 1964 with the launch of Wham! until March 1969 when IPC revamped Smash! into a more traditional boys adventure weekly. (However the 'Power Comics' label wasn't actually applied to them until 1966.) Although each title except for Terrific had several Annuals there was only ever one Summer Special devoted to the comics.

In 1968, with Wham! and Terrific already canceled, and perhaps knowing that this would be their only chance to produce a 'Power Comics' special, Odhams combined all the surviving titles into one big 56 pager with Smash! Pow! It's Fantastic Summer Special.

The cover made it clear that the emphasis would be on Marvel reprint, but to clarify its Britishness and summer theme, a hand coloured stock photo of Blackpool Tower was used as a backdrop to a Spider-Man image. (With the tower being the tallest structure in town, where was Spidey swinging from? My guess is he'd attached his webbing to the helicopter that routinely patrols Blackpool's seafront. Yes, that'd be it.) Please forgive the tatty cover. I've lost count of how many times I re-read this much-loved comic when I was younger.

Odhams had been holding some Marvel material back that they hadn't used in the weeklies, so this was ideal for the special. Therefore it kicked off with the Spider-Man/Doctor Strange team-up from the American Amazing Spider-Man Annual No.2. Classic work by Stan Lee and Steve Ditko, although Odhams policy was to remove the credits. 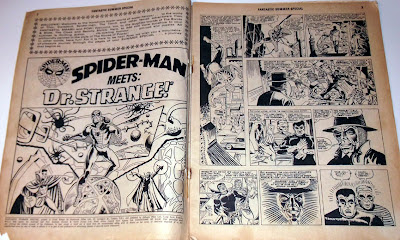 Very few British characters were featured in the special unfortunately, but we did get a brand new Cloak story by Mike Higgs. Personally I didn't care about some other strips being excluded as long as The Cloak was in there... 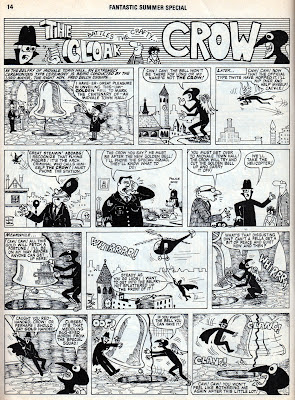 Power House Pin-Ups, a popular back page feature of Fantastic, also featured in the Summer Special. Here's one of Thor, alongside a reprint of a Thor story from Journey Into Mystery Annual No.1. 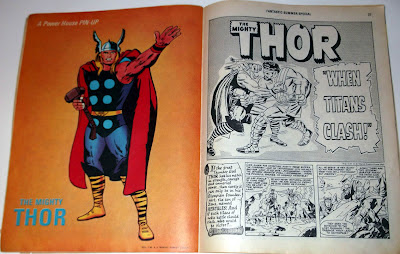 The centrespread  featured an excellent Fantastic Four pin-up by Jack Kirby and Joe Sinnott. This had originally appeared in Fantastic Four Annual No.5 but in the UK version the colouring was far superior than the flat tones of the American original. I had this pinned on my bedroom wall when I was a kid, (along with most of the pin-ups from the back of Fantastic and Terrific) and you might still be able to see the holes made by the drawing pins in the corners. 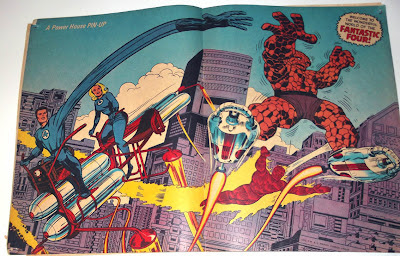 Sammy Shrink, who had originated in Wham! before moving to Pow!, had a half page strip in the special, drawn by Terry Bave. That advert for Smash! underneath the strip summed up the comic nicely. It truly was "the comic with everything". 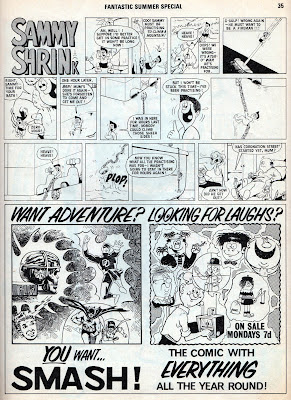 More reprints, with this one of Daredevil No.1 by Stan Lee and the great Bill Everett... 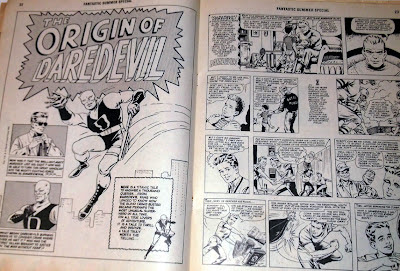 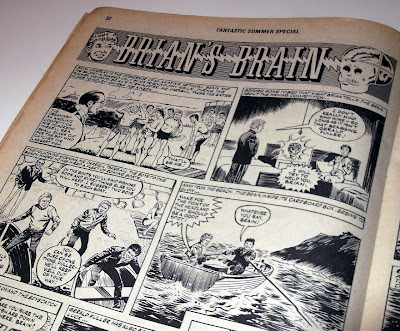 Also from Smash!, a new Swots and the Blots page. This looks like the work of Leo Baxendale (or perhaps a Leo Baxendale/Mike Brown collaboration) which would be unusual if it was as, except for one issue, Leo only drew The Swots and the Blots after IPC revamped Smash! in 1969 (despite some historians crediting him with the strip since 1966). Any opinions welcome. 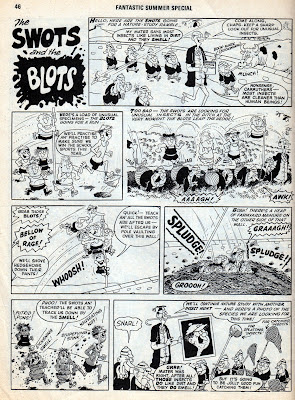 There were several other strips and features in the special such as a Human Torch/Iceman team-up from Strange Tales, a Mr.Knowall puzzle spread, a feature on Avengers mansion from Avengers King Size Special No.1 and more pin-ups, including this back page composition of the X-Men. 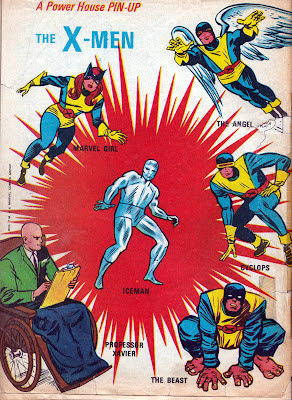 The Marvel character most notable by his absence in the special was The Incredible Hulk, probably because Odhams had already used all the available Hulk stories and had caught up with the US editions. These days an editor would use stock art and produce a quick 'Hulk's Greatest Battles' feature, but such things were not really done back then.

Smash! Pow! It's Fantastic Summer Special was a unique item that really did make the summer of '68 special. A shame there would be never be any more.

Interesting the cover says 'the best of Fantastic, Smash and Pow Weekly when alot of the material is new to the UK (or atlest, them magazines). I could guess when it said the best, it meant the best characters, but I could see that best of putting people off, thinking it was reprints, when it wasn't. Very interesting choice of words and I wonder if choices like that might have... created problems for them?

Do you remember a double page spread of The Cloaks, hide out? It was fantastic!

I bought this one too. Also read it a lot. I was lucky enough to have the Spidey/Dr strange comic, which is still my favourite comic featuring either character.

The Swots and The Blots is a bit of a mystery. It does seem to have been roughed out by Baxendale but the finish is not quite as good as Mike Brown. Maybe Artie Jackson?
I know you've dated the run of Power from memory, and it's nearly right- Wham! was 20th June 1964 and the Power symbol appeared first in October 1966.

Thanks Nigel. I'll correct that info. I was indeed going by memory. Dunno why, as the comics are in easy reach. :)

@"John" are you possibly thinking of a half page big picture that started a story? I don't recall a double page spread.
http://4.bp.blogspot.com/_448y6kVhntg/RazX07dGpMI/AAAAAAAAAUo/t6cEA8sxQP0/s1600-h/cloak.jpg

I'm sure I am! My memory has enlarged the whole thing!

That's the page right enough. I remember copying it when I was a kid. I haven't seen it in years.
Thanks Lew

The first combined Pow! & Wham! #53 started with an almost full page picture of the Cloak's secret sanctum. It looked a bit like a pub cellar with a desk, a chemical lab, a library of ancient books and scrolls, a bizarre device that was probably a 1960's idea of a desktop PC and a huge dinosaur skeleton. My favourite part was the gallery showing the Cloaks of earlier centuries. He also had a portrait of The Shadow with the inscription 'my hero'.

This was also the first part of the Warlock story - hence the significance of the ancient books - and led on to the first meeting with Lady Shady.

Confess I had to look that up in the actual comics - in my faulty memory it was published a few weeks later and Shady was already a gold statue in the back of the panel. It's weird what we overlay on reality, but I guess if we lacked imagination we'd be following Euro 2012 instead of digging out 44 year old crumbling newsprint.

... also thanks for posting the Crow story in full. I haven't read that in over 40 years and had forgotten it existed or that the Cloak had any adventures outside of the weekly.

You're welcome Tony.
By the way, did you click on the link in my previous comment? It shows the relevant Cloak page.

There's more info on the character here:
The Cloak

Mike Higgs always seemed to have a great sense of occasion. Just as that splash panel of the Cloak's sanctum greeted new readers to the first combined issue of Pow! & Wham! the merger with Smash! later in the same year gave him an opportunity to reintroduce the entire cast of characters - along with new villain Deathshead and Mike himself, twitching nervously in his Birmingham garret!

Yes, I think Mike always went the extra mile with things like that. Unlike some of the artists of the day Mike was a comics fan as well as a contributor so he understood how important it was to bring readers up to speed or do bring a bit extra to the strip.

In my opinion IPC should have left him to do what he wanted, as Odhams had, instead of wanting him to fit into the system of the "sausage factory" (as Leo Baxendale called it) of their more formula view of comics.

lew,
i only ever owned 2 issues of a "power comic", i think it was pow! from 1968 or 1969, i got it many years later from a school fete stall. i remember some characters from it; bad penny, a strip called bluebottle and im sure spider-man and another strip featuring superman, batman and robin. i cant remember the other stories. any ideas which comic it was? or other stories that would be in it. these 2 comics always made a great impression on my mind.
thanks

Bad Penny was in Smash but it sounds like it'd be the merged Smash and Pow from late 1968 from your description.

Bluebottle and Basher, a cop and robber strip, was in Valiant though, if that's the strip you remember.

Have you used the search facility in the right hand column of this blog? You'll find a few examples of various Power Comics from previous posts. Hope that helps.

Gorgeous stuff indeed. I have loads of these UK comics, along with hundreds of Aussie ones, but I still get a buzz when I see them. Love it!