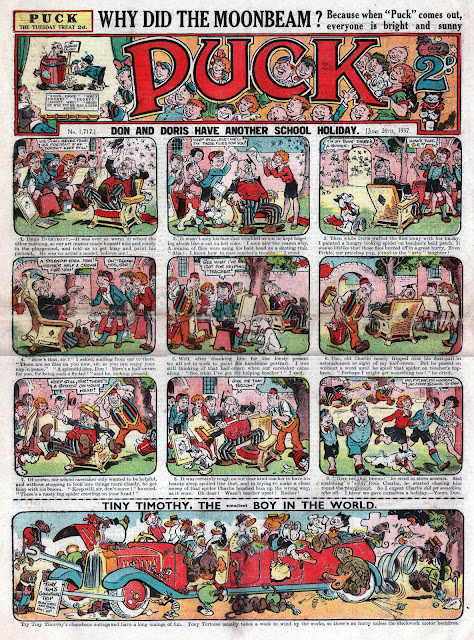 A bumper post today with no less than three Amalgamated Press comics from my collection that were all on sale this week in 1937! I've a lot to cover so I'll try to keep it brief.

Let's begin with Puck No.1,717 and an excellent cover (above) by Roy Wilson to illustrate Don and Doris. The strip had begun a year earlier as Don the Day-dreamer about a boy who dreams of having great adventures, but by 1937 the everyday realities of ordinary but amusing antics had taken over...

Long before Black Bob amazed us, was the real life canine superstar Rin-Tin-Tin whose life was later fictionalised in radio, films and in the pages of Puck. 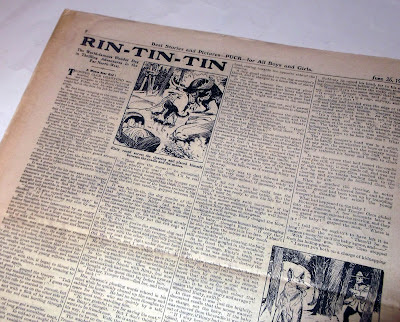 Compared to the other two comics showcased today, Puck was the old-timer, having been around since 1904. The contents of this 12 page issue were mainly adventure based, with exciting serials such as Captain Moonlight. The three panels showing the decent of the windmill sails not only break away from the traditional layout but feature artwork that is more sequential than most UK adventure strips of the period. Artwork by Walter Booth. 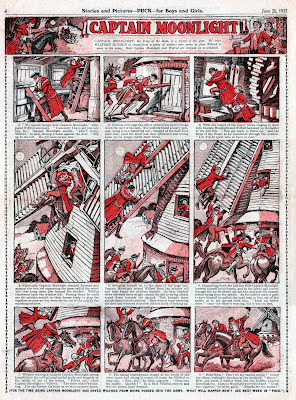 Booth was also the artist on Rob the Rover, Britain's first adventure strip. This particular strip is quite eerie because it features the fiery fate of an airship just six weeks after the real-life tragedy of the Hindenburg disaster! Dozens of airships had exploded over the years (including the British R-101 with the loss of 48 lives in 1930) but the proximity of this strip to the Hindenburg tragedy seems a little too close for comfort. The schedules of publishing comics back then usually meant that strips were drawn six to eight weeks ahead of publication so this was presumably bad timing rather than bad taste. 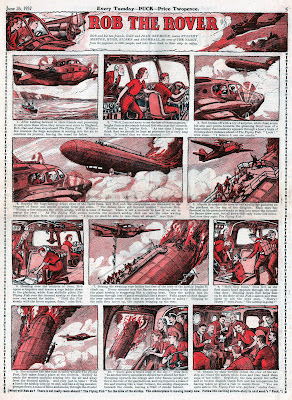 Moving onto The Joker No.504, there's a wonderfully illustrated masthead (by who, I do not know) above a lively Alfie the Air Tramp strip by John Jukes I think. 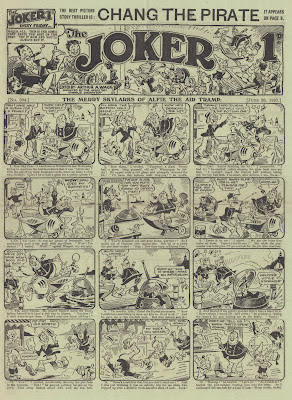 Inside, Buck Tupp and Flannelfoot draw comedy from the then-popular craze for cowboys and Indians. 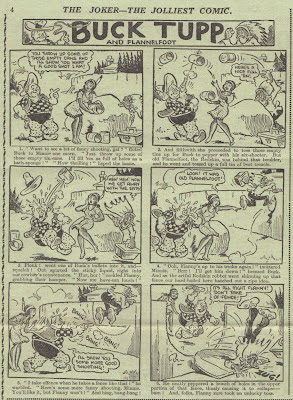 Bright and Gay was a feature based on the sort of comedy patter seen in variety hall double acts of the time...

On page 6 of that issue, an ad for Jolly Comic, which at the time had the UK license to publish Popeye by Elzie Segar (as seen in a previous post)... 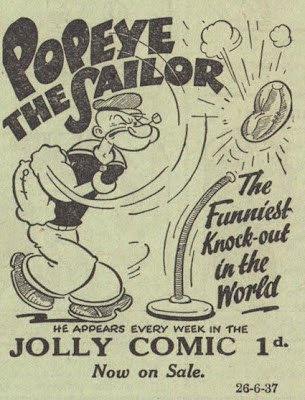 The back page of Joker brought us the serial Chang The Yellow Pirate (the sort of racist description that's quite rightly embarrassing these days). Art by Colin Merritt. 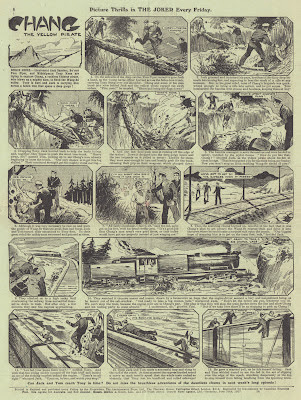 Finally, here's Crackers No.436. This comic was 2d for 12 pages and ran from 1929 to 1941. The cover strip features The Adventures of Bob and Betty Britten, drawn by Alex Akerbladh. According to Denis Gifford's Encyclopedia of British Comic Characters this was the first full colour British adventure strip! 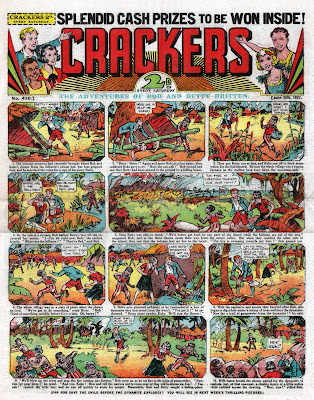 Inside, there was a busy mixture of more adventure strips, text stories, features, and a couple of humour strips. 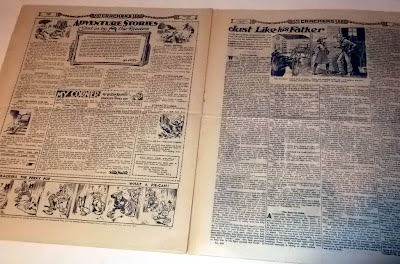 One of the humour strips was Happy Harry and Sister Sue by the great Roy Wilson (whose style influenced so many artists of the day). Beneath it, a feature that would inflame sensibilities today. Editors nowadays would have a fit at the notion of encouraging children to be interested in such items, yet even up to the 1960s activity pages such as Mr.Knowall in Smash! would show kids how to play tricks with matches. 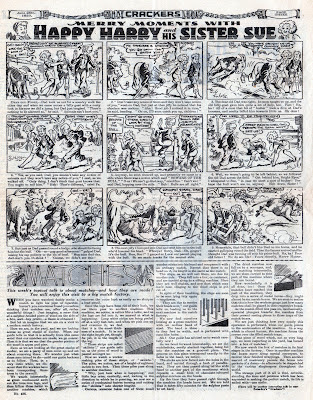 On the back page, Terry and Trixie, The Stars of the Circus. Like the cover, this was also drawn by the Swedish born Alex Akerbladh. You may have noticed that several few strips I've shown today feature a boy and a girl in equal billing. An early indication of equal rights in comics perhaps? 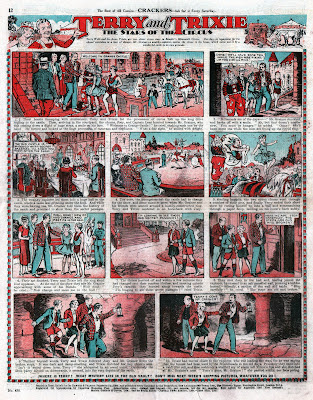 Below is a photo of how part of a newsagent's counter display may have looked this day 75 years ago, back in the times when comics were beside the till, making them look smarter and more attractive to customers instead of being rammed into shelves as they are today. 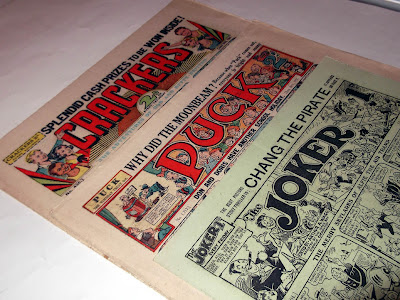 Absolutely beautiful , Lew! I love these pre war comics.Something magical and other worldly about them. Real craftmanship and pride in their work emanates from the very pages.

What I like about them is that they've absorbed the zeitgeist of the times, as do many UK comics from other decades of course. It's like looking back into an exaggerated version of the 1930s, which of course it is.

Such amazing detail Walter Booth put into his Rob the Rover page! Wow.

Those comics laid flat look almost new or is it Photo Shop trickery? Thanks for sharing.

I adjusted the levels of the scans to make them brighter but as you can see from the photo all three comics are in excellent condition. Just proves that paper won't crumble or fade if it's looked after. Well, not for at least 75 years.

Very interest blog. Compared with their American counterparts, I always find the early British strips so old-fashioned and (in a sense) backward looking. The relationship between the image, the speech bubbles, and the narration is often awkward - rather more akin to picture books than comics. They often show and tell, rather than showing and allowing the textual narrative to ADD something. This, of course, makes them charming. Take, for example, the Boys and Girls Daily Mail (a short-lived children's supplement to the Daily Mail running 8th April-26th July 1933) which carried titles such as 'Adventures of Mig & Meg and their Magic Bone'! It is utterly dreadful, but fascinatingly bad. The magic bone runs behind the strip's title, making it almost unreadable. Contrast this, less that a year later, with the launch of Flash Gordon in the US (or Little Nemo, much earlier). Literally worlds apart in terms of quality, understanding of the genre, but also in terms of reader's expectations. The former looking backwards to a sort of Edwardian childhood fantasy, the latter a progressive, forward-looking strip. Not sure how to upload strips on this - I have the complete run of the Daily Mail's short-lived strip.