This week in 1953: Coronation comics 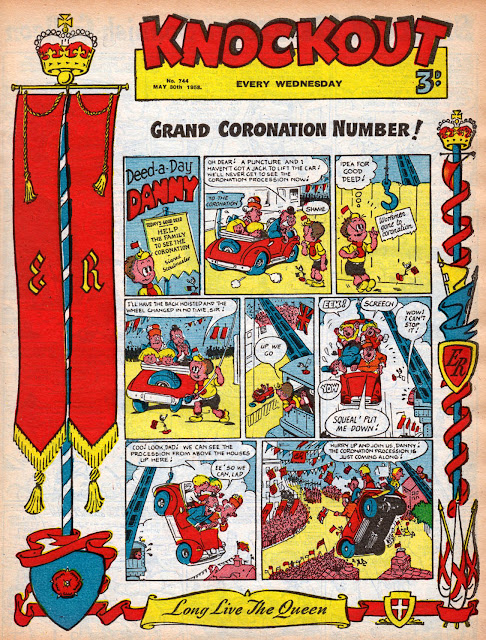 As you might expect, British comics that were on sale this week 59 years ago in 1953 were full of celebratory strips for the Coronation of Queen Elizabeth. Here's the cover of Knockout No.744 with its Deed-a-Day Danny strip which I think is by Hugh McNeill although other artists did often ghost it apparently...

Knockout carried a good balance of humour and adventure strips plus prose stories. Only the humour strips featured a Coronation theme though. Here's Billy Bunter by Frank Minnitt from the days before Reg Parlett put his own distinctive stamp on the character... 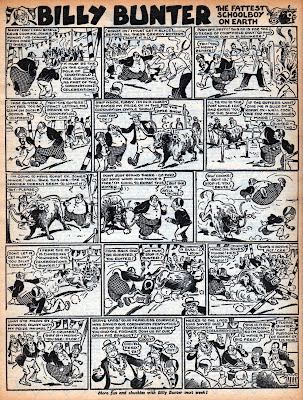 Apparently many families bought their first TV set so they could watch the Coronation. Those that didn't have a TV flocked to a neighbour's house who did, as reflected in this superbly drawn Mike strip by Eric Roberts... 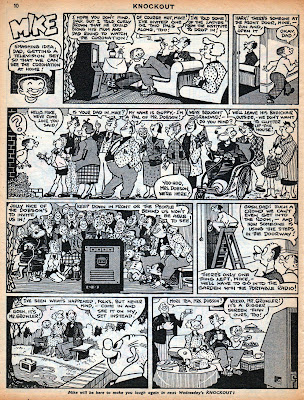 The often bizarre, always amusing Our Ernie used the theme of a street party to kick off this week's odd adventure. 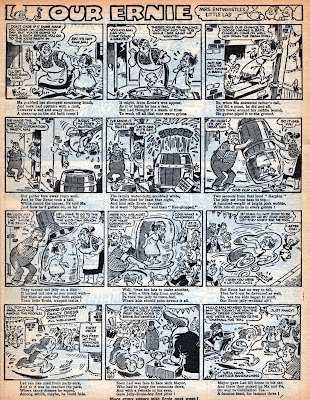 On the back page, the rubbery animated style of Reg Wooton illustrates Sporty. (Yes, the back page carried the Knockout logo as well. A good move to possibly thwart any newsagent who carelessly placed it back to front.) 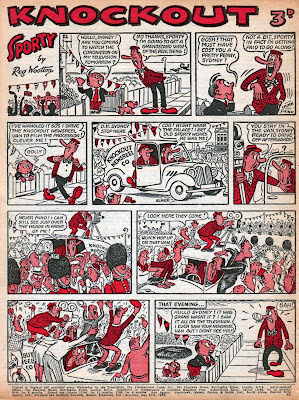 Over in Chips that same week in 1953, issue No.2983 had a specially illustrated logo for its 'Grand Coronation Number'. Good natured tramps Weary Willie and Tired Tim end up having a great Coronation day, no thanks to the efforts of the unfortunately named Dickie Diddler. Art by Percy Cocking... 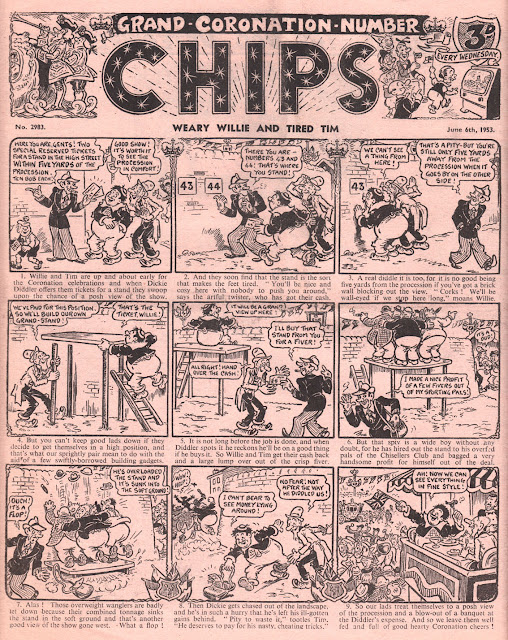 Chips' 16 pages had several strips themed around the big day. Truth be told, some of the plots had a distinct similarity, - characters endeavouring (and succeeding) to see the Royal procession. Dickie Duffer the Dunce, by Albert Pease, was no exception. The other strip on that page, Rudolf the Red-Nosed Ranger (by Arthur Martin) was perhaps stretching things a bit by showing cowboys celebrating the occasion. 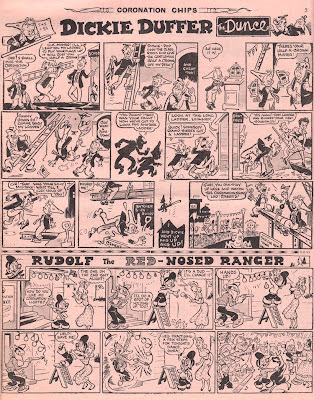 Casey Court, a long established favourite, showed a street party carrying on well into the night. Great work by Albert Pease who also drew Jimmy Joy the TV Boy beneath it... 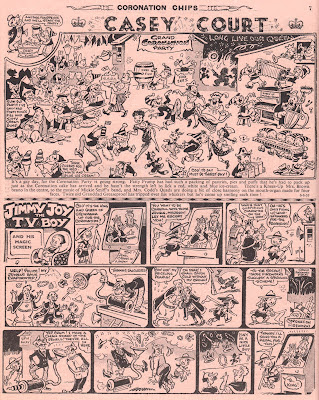 Sammy Sprockett and his Pocket Rocket showed that even people on other planets were keen to catch the Coronation. Art (and probably script) by Denis Gifford. Smashing work. Below it, Sally Sunshine and her Shadow pre-dates Whizzer and Chips' Me and My Shadow by more than a decade, although Sally's shadow seems completely superfluous to the plot in this episode. Artwork again by the excellent Albert Pease... 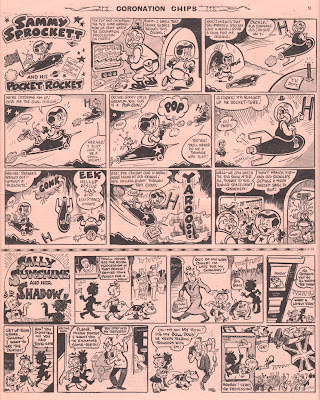 A nice busy page coming up next featuring Pa Perkins and Percy and Homeless Hector and Moonlight Moggie, both by Bertie Brown, along with Philpot Bottles (Offis Boy) and the real editorial next to it. These editorials, one jokey, one straight, may seem outdated today but they served an important purpose in connecting with the readers and making them feel like they were being treated as equals. Stan Lee mastered a similar thing of course in the 'Bullpen Bulletins' pages of 1960s Marvel Comics, mirrored by 'Alf, Bart and Cos' in the pages of Smash! and other Odhams comics in the same decade. 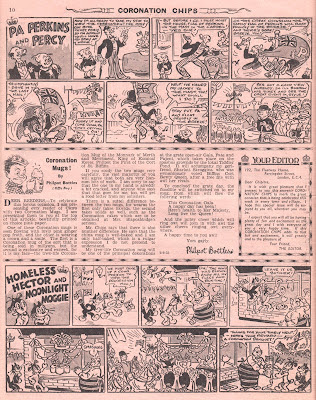 Last but not least, Merry Molly Andrews 'The Pretty Girl Ventriloquist', although with it being a text story Molly could look like a bulldog chewing a wasp and we'd be none the wiser. Sharing the page is a short Peter Quiz strip by Arthur Martin and the only advert in the entire comic, promoting Kellogg's Corn Flakes. 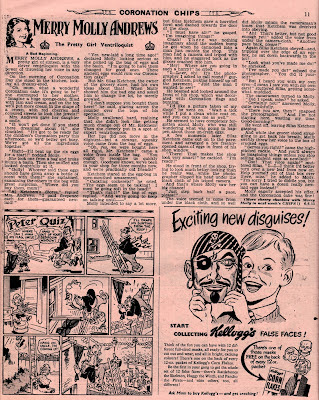 A good edition of Chips, but sadly not enough to boost its sales as the comic ceased publication a few months later in September 1953. Although a run of 63 years is nothing to be sniffed at and deserving of a celebration in itself!
Posted by Lew Stringer at 23:43

No comments? Not a very popular subject the 1950's comics. Too old fashioned.

Well, I certainly enjoyed looking at these! Some lovely material there.

I especially liked Sammy Sprocket and His Pocket Rocket, which somehow sounds like the title of a potential Viz strip.

Wasn't the Eric Roberts Mike strip reprinted by IPC at some point in the Seventies, with a different title ... ?

That's right Raven. 'Mike' was reprinted in Buster in the late sixties as 'Smiler'.

Smiler; that's it! I have some 1970-72 issues where it features in the form of 'Smiler and Dimps', Dimps being his sister.