The Dandy: Last Ever Issue 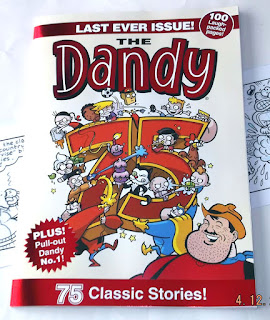 The final print edition of The Dandy is out now, with its red foil logo shining under the lights of the newsagent's shop. A very sad day indeed, but the comic goes out in style with a huge 100 page issue for £3.99.

It's also a day of celebration, as the comic commemorates 75 years of continuous publication (so it must have been doing something right). It's also the day the new digital Dandy has launched, and you can access that here: http://www.dandy.com )

No time to mourn the passing of the print edition today as I'm busy with deadlines for other strips but a full review will appear on this blog soon!

UPDATE: This issue is selling out FAST in many areas! Investors are grabbing copies to sell on eBay at high prices already! (If those people had been buying the comic every week it wouldn't be ending today!) If you have difficultly finding a copy, this seller has them (at time of writing this) at the £3.99 cover price (plus postage of course):
http://www.ebay.co.uk/itm/The-Dandy-Comic-Last-Ever-Issue-Tuesday-4th-December-2012-/181038260073?pt=UK_Books_comics_Magazines_UK_Comics_ET&hash=item2a26b89f69
Posted by Lew Stringer at 11:42

Well, my one never arrived in the post this morning. That's disappointing.

Oh gosh, I'd forgotten to buy one! I hope one of York's many newsagents has one left on the shelves tomorrow :S

Mine hasn't turned up either.

I got mine from a newsagents on the way to work this morning. Left one on the shelf. As the woman scanned it though she said to the other guy working there "We should have got some more of these in." :)

I hope the guy who's selling them on eBay can fulfil the orders (including mine!) as when I bought mine he'd sold about 800 of them. He's sold just over 2,000 now! :D

I've looked in tons of shops, and had my dad do the same where he lives, with no luck. The eBay seller you mentioned is sold out as well... Then I just checked the DC Thomson website and there it is. Hope this helps. https://www.dcthomsonshop.co.uk

I contacted DC Thomson and they have printed an extra 10,000 copies which will be sent out next week to those who pre-ordered and others who order.

The eBay seller has, to his/her credit, emailed to say that they've been swamped with buyers and all going well they'll have them mailed out by Mon/Tues.

I've been reading the Dandy on and off over the last two years, and I've got to be honest, it still can't hold a candle to the Beano. Maybe it is because as identified on the BBCs news item it just doesn't strike a chord with kids in the same way the naughty school children Dennis, Minnie and Roger do.

I do think the switch to more gag driven strips has generally been more successful and i think Jamie Smart is a legend. Routinely funny with daft little doodles with a charm all of their own, DC Thomson could do worse than collect all his stuff in a spiffy trade. Its genuinely laugh out loud stuff. Perhaps I like his stuff works so well for me cos it taps into the slightly more silly and grown up humour I enjoyed in Oink! back in the day.

I wonder if more 'underground' cartoonists could have helped revive the Dandy's fortunes...

Anyway, How great is the Korky The Cat strip in this final issue? Very sharp and perhaps indicative of the problems editorial have had trying to keep the Dandy 'relevant' , rather than concentrating on good, funny strips. Jak and Tod are probably a good example of trying too hard to be 'down with the kids'. Its the sort of thinking that if we design a couple of characters in tracksuits with silly modern hair and mobiles, kids will somehow find them cutting edge. Awful stuff. works as well as that time dennis the menace was crammed into a tracksuit in the early 1990s and given a CD player (woo).

A good send off for the printed format. I shan't be following online, sadly. comics just don't work for me online at all, i'm afraid. and i forget to blink so my eyes end up hurting!

Hi there, great review! Was having a wee read through your comments and noticed that a lot people were struggling to get their hands on copies. I discovered this website the other week www.lasteverdandy.com and they still have copies available!

I thought I would let fellow Dandy fans know as I really struggled to get my hands on a copy and never knew about that website!