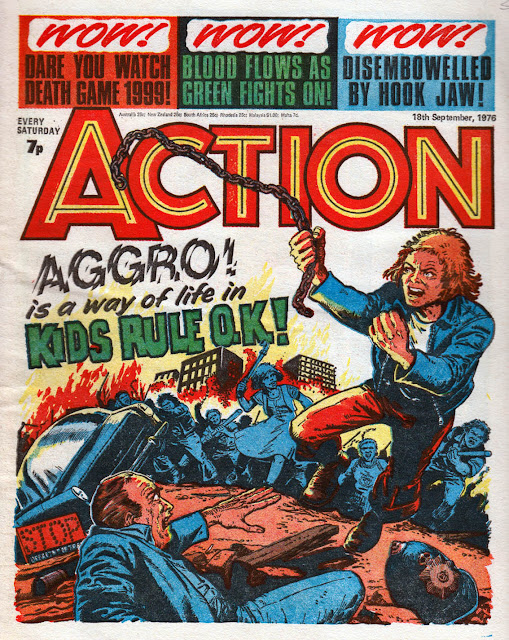 When IPC launched Action weekly in 1976 the violence in its strips caused some controversy from the start, and this escalated throughout its first year. However the most notorious issue was its 32nd edition, dated 18th September 1976. You're probably familiar with the cover, seen on Future Shock! The Story of 2000AD which was recently shown on Film4. Dramatic artwork by Carlos Ezquerra showing a chain-swinging kid in the midst of a riot. On the ground lies a terrified man. Beside him, a policeman's helmet. It's obvious that the man isn't wearing a uniform, but the colourist's choice of blue (same as the helmet) forged an unfortunate link in some reader's minds, giving the impression a policeman was being assaulted on the cover of a children's comic. (I think it also must be the only kids comic in history to have the word "disemboweled" on the cover.)

If that wasn't enough to draw unwelcome attention to the comic, that same issue would also feature a story that caused an uproar in the media. More on that in a bit, but first let's have a look at some of the other contents...

Here's a reader's letter of the sort you definitely wouldn't have seen in Lion or Valiant... 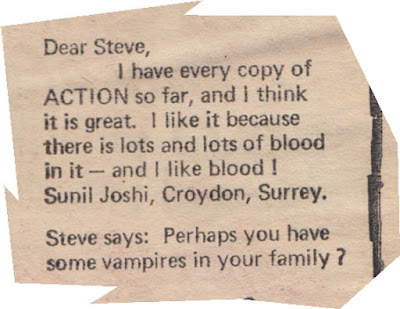 Action wasn't all about the violence but that's what resonated with the readers. Here's Dredger facing some aggro... 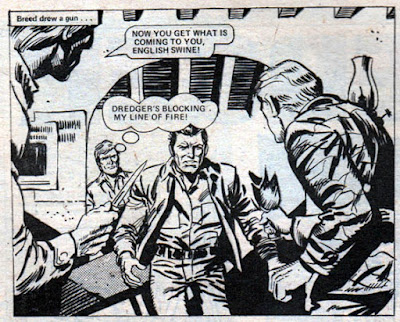 ...and Green suffers a bullet-riddled fate in the finalé of Green's Grudge War... 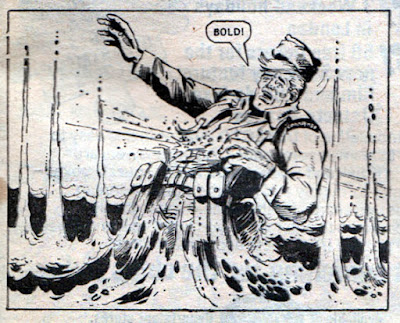 The controversial cover of this issue was only a symbolic image of the Kids Rule OK strip. No such scene actually happened in that week's episode, although there was still plenty of violence and images of a Molotov cocktail being made which no doubt raised some heckles... 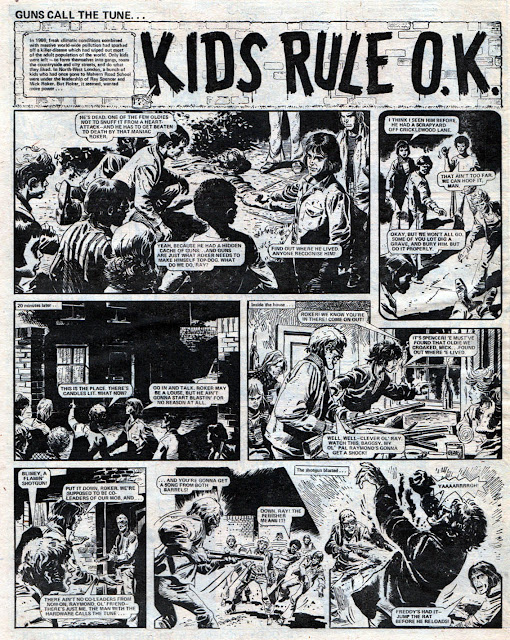 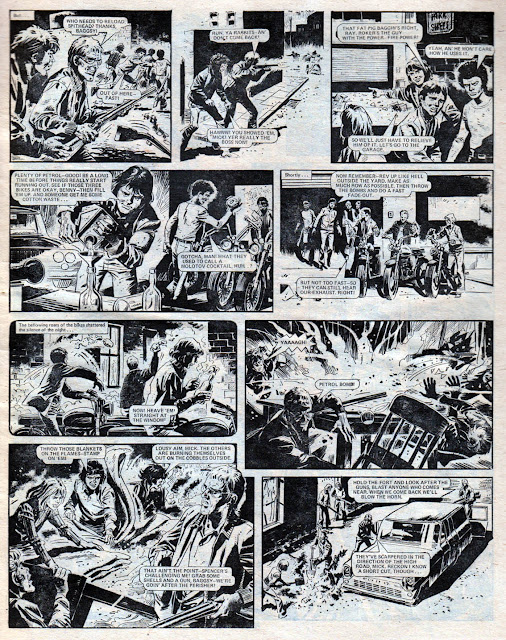 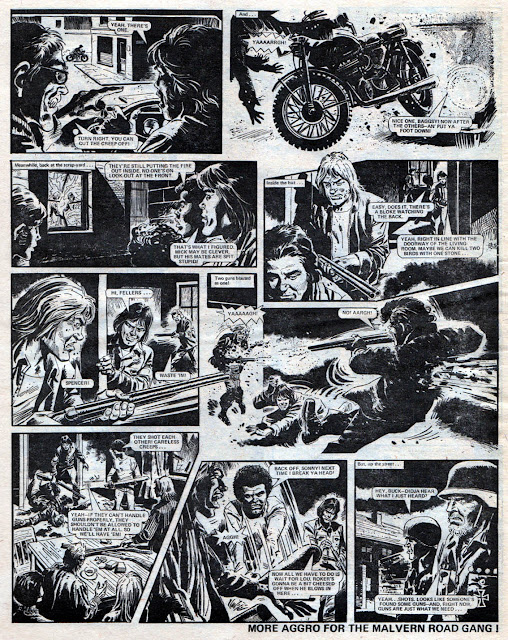 The strip that caused the most outrage was that week's episode of Look Out for Lefty, (written by Tom Tully, drawn by Tony Harding) specifically the incident of the bottle being thrown at a player by Lefty's girlfriend Ange. It was discussed on the BBC's Newsnight and, inevitably, the Daily Mail who ran an article headed Comic Strip Hooligans. The mob had been enraged, and parents called for action, - if you'll pardon the pun. 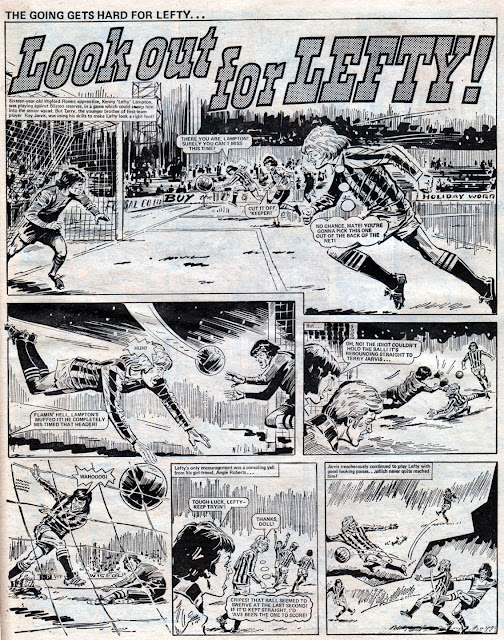 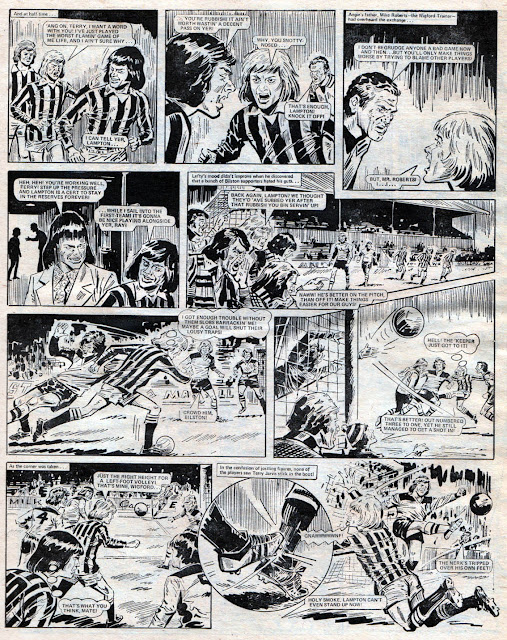 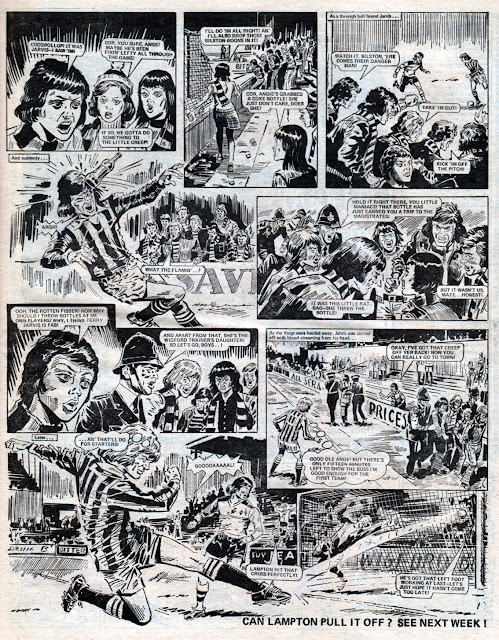 Action was facing condemnation from the media, pressure groups, and from within IPC's own management. The result was that a few weeks later, the comic was suspended for several weeks while many revisions were made to its content. The revamped Action, which returned in December of that year, was a pale shadow of its former self.

Did Action go too far? Yes, it probably did in some ways. It wasn't just the violence that was cut when it returned though, but also the anti-authoritarian elements of some of the plots. (Kids Rule OK was just dropped altogether.) Britain's kids deserved a comic with guts, and it was a shame its recklessness brought about its demise, but I've a feeling it would have happened eventually even without scenes of bottles being flung or kids swinging chains. "Concerned" do-gooders were out to get Action from the start and sadly they finally succeeded.

In complete contrast to the rest of the issue, that edition of Action featured an ad for IPC's new Roy of the Rovers comic. Roy's wholesome visage was the antithesis of what Action was about but it was clear which direction IPC wanted their new comic to go in; traditional standards, formula characters, and a comic that didn't rock the boat. That said, RotR had a long run and was hugely popular, but for many of us it was the edgier Action that was the top comic of 1976. 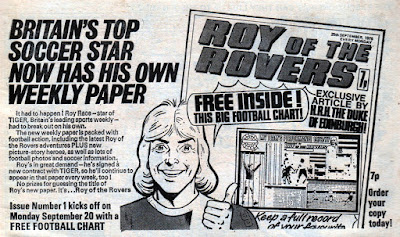 Both Moose Harris and I have unsuccessfully scoured Hansard's online resources for the oft-reported discussion of Action in Parliament, to no avail, has anyone else had better luck?

And the Sex Pistols swearing on TV too - Middle England must have thought the revolution was just round the corner.

If only it had been, Colin.

I don't recall seeing it, John. I know Oink! was discussed in parliament as someone posted a transcript. (I think it may have even been printed in the comic.) But haven't seen the Action debate, if it happened.

I remember picking up the first issue of Action scanning it and thinking "not another bland UK comic" and tossing it in the bin - I did a similar thing with 2000AD (although I gave that 3 issues) my only excuse I was about 17 at the time and US comics and undergrounds (and Punk ) were to me the future I admit it I made a mistake :(

I was the same age. I'd stopped buying humour comics by then of course but Action felt like it was pitched at an older reader so I bought that for most of its pre-ban run. By receiving the issue above I've recently completed that run, apart from the unreleased 37th issue, but as that would cost at least £1000 I think I'll pass. :)

I've really enjoyed your posts on Action, Lew. I missed out on them cometely, as I never even gave the comic a second glance in those days when Marvel UK ruled. Little did I know that I was ignoring a piece of UK comics history.

Sadly l couldn't afford this comic as l was already on 6 a week. The ads fascinated me.
As you know, l wrote and eventually illustrated for IPC and othe publications for over 10 years so l really didn't appreciate you lecturing me on how to write. You seem to have a knack when it comes to irritating me. I haven't seen much of your work but what l have seen, l've found your punchlines and stories weak. Perhaps someone else writes for you. I always end up improving on your stuff. How l miss the real greats such as Nixon, Lacey, McDiarmid, Metcalfe...etc.

Steve, you had two pages published in Buster in 1991 and it's clearly gone to your head. You've claimed elsewhere that you worked for Oink!, which we both know isn't true. Now you think I'm "lecturing" you on how to write! Go away.

Steve Matt - for someone who constantly claims to be bullied by other professionals, you sure do like to egg on someone who has left you alone after you ran crying to a group moderator. Grow the hell up. Everyone is well aware that you're jealous of Lew and his career and if you really do improve upon his work, why aren't you working in comics right now? For such a self-proclaimed genius, you do very little. If you ever did anything properly and professionally maybe you'd actually have a career but you like to insult working professionals and spend your days spamming publishers on Twitter rather than actually work to submit anything in the correct way. You're a horrible, bitter person.

This "Steve Matt" (Stephen Matthews) sent me a long, long rant on messenger too, telling me I need drawing practice and that I was his least favourite artist. Entirely up to him to hold that opinion of course but I don't know what he hopes to gain by it.

I think the answer is jealously. He has zero talent (let's face it, his work hasn't improved in 30 years. If anything he's gotten worse) and he knows he'll never get any professional work now. Next best thing is to lash out at the person whose career he feels he deserves. What a sad existence.