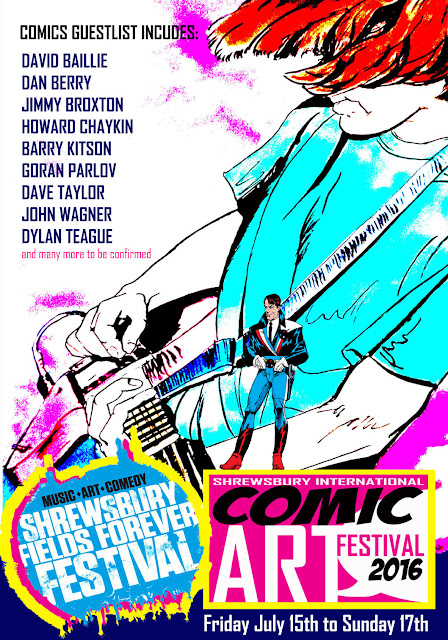 Spread the word! Here's another date for your diaries! The Shrewsbury Fields Forever Festival will this year be including the Shrewsbury International Comic Art Festival and featuring guests from the comics industry including John Wagner, Howard Chaykin, Doug Braithwaite, Dylan Teague and more (plus me). Here's the info from the press release...

As always thousands of music fans will be flocking to The Shrewsbury Fields Forever Festival, Shropshire’s largest festival devoted to Alternative and Dance music, this July to see acts like the Happy Mondays and Wretch 32 play live.
The award winning festival has become an increasingly popular event since it was established 5 years ago, embracing a full comedy festival on the Sunday and now, for the very first time, it presents a brand new International Comic Art Festival celebrating the wonderful diversity of the medium of comics and graphic novels.
And to help celebrate the county town will play host to some of the biggest names in the comic industry from all over the world. Guests from America include legendary creator Howard Chaykin, famous for illustrating the first ever adaptation of Star Wars for Marvel Comics and for his controversial classic book Black Kiss.
Also from the states the festival welcomes multi award winning, novelist, screenwriter and comics writer Jason Starr who as worked on some of Marvel’s most popular characters including Wolverine and The Punisher.
Joining them from Croatia is renowned artist Goran Parlov, famous for his outstanding work for Marvel Comics on The Punisher and Nick Fury, as well as his work with Kick Ass creator Mark Millar on Starlight.
Of course no international festival is complete without representation from the huge swell of talent from here in the UK including Marvel and DC artists Doug Braithwaite and Barry Kitson plus local creators Dan Berry and legendary Judge Dredd co creator John Wagner who appears as the inaugural event’s local guest of honour.
In total around 20 professional creators will be attending the festival as special guests.

The comic festival will be situated at the heart of the main festival within the prestigious Quarry Park venue and features a program of inspirational events hosted by many of the star guests including talks, workshops, master classes and panels as well as exciting live art events.
In addition to all of this a huge marquee will be rammed full of the cutting edge of comic publishers from all over the UK helping festival goers discover the full breadth of the medium of comic art from the smallest self publishing creators to the largest independents and professionals.
All genres will be represented from the expected superheroes, sci fi, horror and humour comics to the more mainstream crime, action and drama titles many visitors may be discovering for the first time.
“It’s a about time Shrewsbury had its own Comic Festival,” said organiser Shane Chebsey – “…and what better way to bring comics to the masses than via the county’s most popular music festival. It’s a match made in heaven… geek heaven”!
The Shrewsbury International Comic Art Festival is happening on the 15th – 17th July from 12 noon to 18.00 each day at the Quarry Town Park.
Tickets and information can be found at: www.smallzone.co.uk/Shrewsbury-Comic-Art-Festival.htm