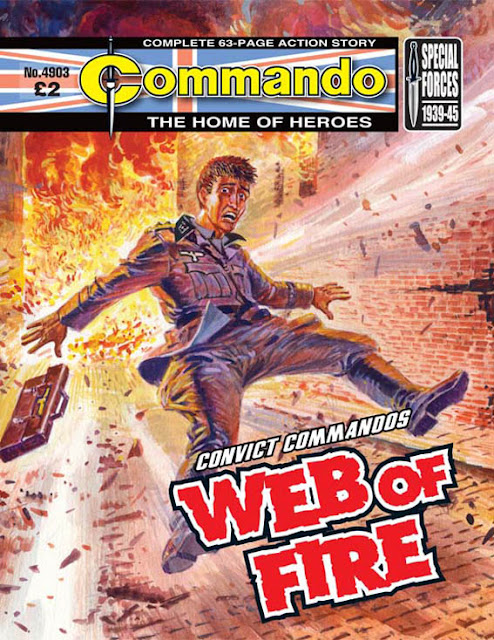 Here's the info on the new issues of Commando, - in the shops now! Click covers to see them much larger.

Commando No 4903 – Web Of Fire
In early 1945 the skies above Dresden burned brightly with the fire of an almighty Allied bombing raid that would go down in history.
Unfortunately for “Jelly” Jakes of the Convict Commandos, he happened to be on a secret mission in the heart of the German city that fateful night when all hell broke loose.
If he managed to survive the relentless bombardment he would also have to contend with a blast from the Commandos’ past.

Commando No 4904 – King Of The Spits
The letter read:
“I, Count Ernst Von Steiger, the Red Arrow challenge the leader of this squadron to a personal duel at noon tomorrow. I shall be waiting at 16,000 feet at British Map Ref. 481609.”
And just before noon a lone Spitfire took off. At the controls was young Mike Carson, the pilot they called
KING OF THE SPITS

Introduction
Here is a genuine Commando classic. It has got everything that we need: great story, fantastic art and an eye-catching cover.
This solid aerial tale is brimming with action but not at the expense of the characters, all of whom are distinctive and memorable. Our stoic English hero is in charge of a tough Aussie squadron based in North Africa, but it is their charismatic German adversary who, in my opinion, steals the show…
Scott Montgomery, Deputy Editor
King Of The Spits, originally Commando No 238 (November 1966), re-issued as No 899 (January 1975)

Commando No 4905 – Action Africa!
During World War I, Lieutenant Trevor Waite was an infantry officer posted to the colony of British East Africa. Somehow he found himself serving as part of a boat squadron. Although no sailor, he was compelled to do his duty and prove his worth to the obnoxious C.O. who was convinced that Trevor was a coward.
Although Trevor’s vessels were sturdy, reliable dhows, it looked like they might have met their match in the Germans’ superior Type 1885 torpedo boats…

Commando No 4906 – Fighting Return
The traffic and the marching men were all heading in one direction…away from the advancing Germans and towards the port of Dunkirk. Only there did the retreating British troops have a chance of being evacuated to England.
However, one truck was heading the other way and it was not by mistake. Two British soldiers and a middle-aged bank manager were staging their own
FIGHTING RETURN

Introduction
A trio of veteran Commando creators bring you this great tale of courage and determination in the face of adversity. Writer Cyril Walker’s script has a refreshing twist where our main characters have strong reasons for heading away from the beach at Dunkirk rather than towards it.
Another old hand is interior artist C.T. Rigby who illustrates with his usual aplomb, while the equally reliable Jeff Bevan’s cover is wonderfully dynamic as well as dramatic.
Scott Montgomery, Deputy Editor
Fighting Return, originally Commando No 2477 (June 1991)