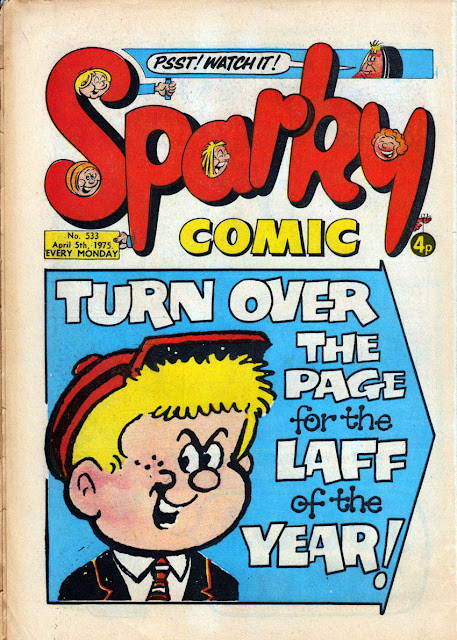 On Saturday 29th March 1975, Sparky No.533 hit the shelves with this eye-catching front cover. "Turn over the page for the laff of the year!" it boasted... 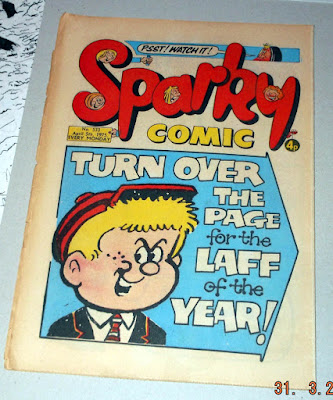 ...so I did, and... it couldn't be done! The front cover had been printed upside down! 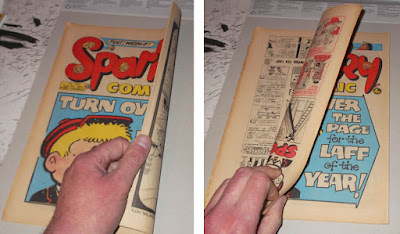 A simple but effective April Fool gag! Made all the more unexpected by it coming out a few days before April 1st, but we'll forgive D.C. Thomson for that. (Even schedules wouldn't be changed just for a five second gag.) 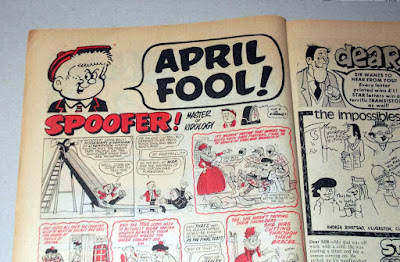 Sparky was D.C. Thomson's wild child amongst their comics at the time, often tapping into the dafter aspects of humour, and readers appreciated it. I couldn't imagine Dandy or Beano doing anything like this back then. Sparky is still fondly remembered by people today, and I'll take a closer look at some of its strips soon when I have more time. Until then, as Bo says on the cover topline: "Psst! Watch it!". Don't be fooled today!
Posted by Lew Stringer at 00:00

Email ThisBlogThis!Share to TwitterShare to FacebookShare to Pinterest
Labels: Sparky

It's genuine! Not an April Fool.

At least, not YOUR April Fool anyway. It was one when DC Thomson originally published it, lol.

The anon is right though, it IS funny. I'd be surprised if the same trick hasn't been pulled elsewhere at some point.

KRAZY comic had their trick back pages of course, which came close, but I don't recall any other comic doing a gag like this with its front cover. Unless anyone out there knows differently?

I could see Cracker doing something like that, Lew. Of course it didn't.

Krazy did the same thing in 1977 by which time, alas, Sparky was circling the drain. The issue had two covers, one on the back upside-down and back-to-front, both featuring the Krazy Gang warning readers to watch out; one cover led to the regular stories, the other led to a big ‘April Fool’ announcement like Spoofer’s . Sincerest form of flattery, they say…

Thanks Stephen. I wasn't following UK humour comics at that time so hadn't seen that issue.

Well around that time I was 4 and into Mr Men books! Didn't read comics properly till 1980; clearly recall looking at a Beano with my mum in a newsagents and trying to remember the names of the Pup Parade doggies on the way home! Haven't looked back since.