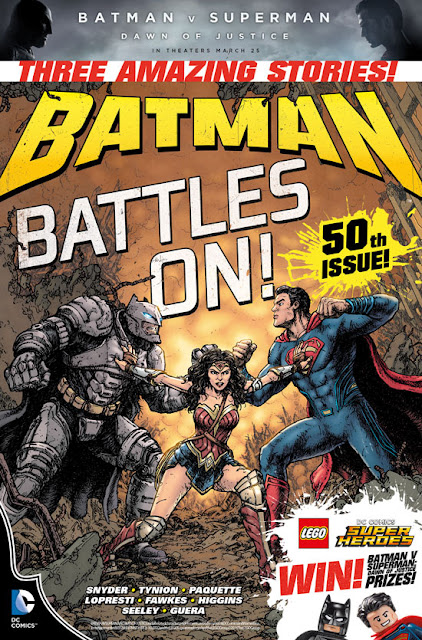 The British edition of Batman comic published reaches 50 issues this week and celebrates with a cover by Chris Burnham. Here's the PR directly from the publisher, Titan Comics...


Welcome to the 50th issue of Batman! Yes, we’ve reached our half-century of issues! Inside, you’ll find three thrilling stories about the Dark Knight. First up, there’s the latest instalment of ‘Superheavy,’ in which Bruce Wayne wants some answers! Next up is a special one-off story where Batman faces a double, before we round things up with Batman Eternal, where Batman tries to track down Hush!
All for just £3.50!

Batman – ‘Superheavy' – Part 9’
Inspired by recent events, Bruce Wayne realizes who he really is, and insists on gaining entry to the Batcave. But even if Alfred lets him in, is he prepared for what he’ll find? And how far will Bruce go to reclaim his identity as the Batman? 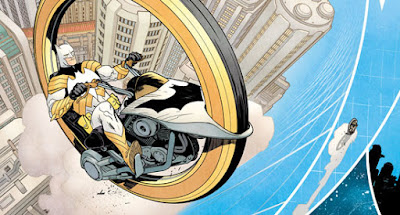 Legends of the Dark Knight – ‘I, Batman’
We take a break from Robin, Son of Batman for an issue, to bring you a special one-off tale! When another Dark Knight begins intervening in street violence in Gotham City, Batman finds himself facing a doppelganger with a difference! Featuring the Joker, Killer Croc and Clayface! 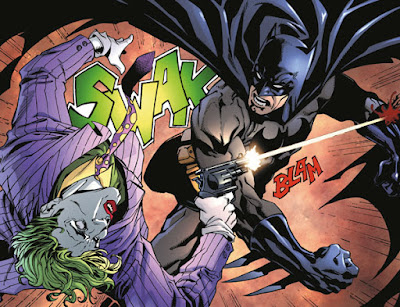 Batman Eternal – ‘City of Whispers’
As riots break out across Gotham City, Batman and his new assistant Julia Pennyworth try to keep things under control. Meanwhile, the rest of the Bat family do their bit to keep order on the streets, but Commissioner Jason Bard has his own ideas on how to take back control! 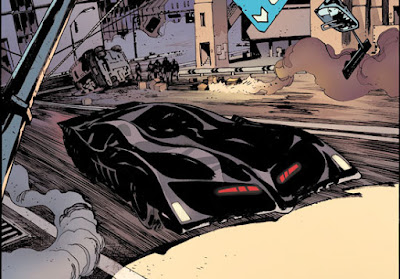 You'll find Batman No.50 in WH Smith (if you're lucky. My local branch dropped it two months ago, despite it selling well.) Or you can subscribe here:
http://titanmagazines.com/t/batman/
Posted by Lew Stringer at 20:28

Actually the cover is drawn by Chris Burnham, artist on Batman Incorporated comic.

Thanks for the correction. I'll put that right. Serves me right for trusting press releases!

My local WH Smith seem to have dropped it too which is a pain. They still stock some of the newer Titan DC titles but if they've dropped Batman, I can't imagine Supergirl and Wonder Woman lasting too long.

I don't think poor sales are responsible. Batman must be Titan's top seller. I'm wondering if it's some cock up in Smith's system. Batman was dropped when Batman Arkham was relaunched at Gotham Central so it wouldn't surprise me if someone had deleted Batman instead of Batman Arkham from Smith's database by mistake. It has a precedent, years ago when Smiths stopped ordering the Buster annual because it had been missed off their database so they claimed they'd never stocked it! It killed the book and there was never another Buster annual.

My Smiths still stocks every other DC Titan book except for Batman and Supergirl. I'm guessing Supergirl was cancalled as it's not in yj

I think it's safe to assume that Supergirl was abruptly cancelled without warning after issue 3, but it would have been nice if Titan had announced that instead of wasting readers time looking for it.

As for Batman, I've informed Titan that Smiths are not stocking it and they're investigating,

That anecdote about Buster doesn't sound right. I thought Fleetway ended all of their annuals at the same time? Whizzer and Chips and Buster's last annuals were both the 1994 editions.

In two issues time it will be 150 issues since the first Batman Legends comic back in 2003 which is quite impressive really. The London and Fleetway Editions 80s and 90s Batman comics only lasted about half as long I think.

That's how it happened, James. Fleetway may have decided to axe the other books afterwards but the Buster Book 1994 was left off Smith's database and it damaged potential sales. I remember Smiths telling me this and I remember my conversation with the Buster editor.

Yes, Rod, so Batman is clearly selling ok. Which makes it even more concerning that Smiths have dropped it.

It's great Batman is doing well, but yes, Supergirl, at least, is already cancelled... I was trying to get the first issue by mail for a pal in America, and they mentioned it.

On the Titan Facebook page a few people have complained their local Smiths hasn't had Batman for a few months now too. Titan also announced on there Supergirl was cancelled with issue 3 so I guess they use FB more than their own site now for announcements and updates.

Batman has also disappeared from my local Smiths and so has Dr Who (Tales from the Tardis). However, they have now started stocking 2000AD which they never have before. Also, a few of the Panini Marvel reprints have started to appear too when they didn't before. Its only a small Smiths in the local ferry port so I guess they don't stock as much as a normal high street shop. They have moved the comics around quite a bit in the last few months. As if they are not sure where to put them. They started off on the bottom shelves then moved up a shelf then moved to another bottom shelf away from all other comics and magazines and next to some toys! Maybe Smiths are in dire need of some staff training!

I asked in my local Smiths and they told me Batman is not on their system. (I think some idiot deleted the wrong Batman title when Arkham was cancelled.) I've notified Titan and they're investigating.

Looks like Wonder Woman No.3 is the final issue unfortunately.