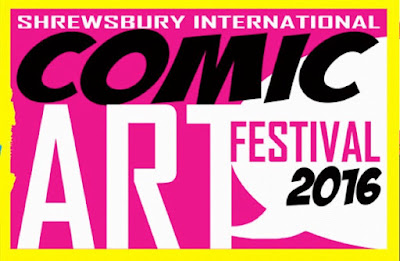 As previously noted, the Shrewsbury International Comic Art Festival on July 15th - 17th was to have been part of a large arts festival including top music acts. However, the Music Festival side of things has now been postponed, BUT the Comic Art Festival is still going ahead as planned and is now FREE!

With free access to our amazing guests and exhibitors for the general public all three days!

So bring all the family for free and enjoy a great day out with lots of other attractions including a fun fair for the kids.

The reason the event is now free is that the Music Festival we are attached to has now been postponed until September 16th.

You can find out more about this on their website at: www.shrewsburyfestival.com

However if you have already bought tickets these will be valid for the new dates and you will also have access to special extra attractions at the Comic Art Festival for paid ticket holders only.

You can also get a refund and still attend the comic festival only if you prefere, but I'd urge you to take advantage of the situation and get yourself two great events for the price of one!! :-)

The Free comic art festival will be open to the general public from 12 noon until 6pm all three days.

We look forward to seeing you there for what promises to be a very special weekend of comics.
Costumed characters very welcome!! :-)

To see the full guest list of superstar artists and writers that you will now be able to meet for FREE visit our website at: www.smallzone.co.uk/Shrewsbury-Comic-Art-Festival.htm
Posted by Lew Stringer at 20:31