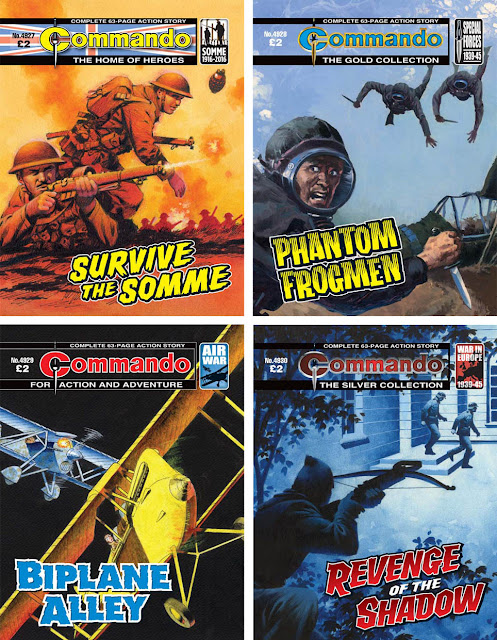 The latest batch of Commando comics, - two all-new issues and two reprint, - are in the shops now. Here's the info from publisher D.C. Thomson...

Commando No 4927 – Survive The Somme
Private Joe Dugdale was one of many men thrust into the heart of a battle which would go on to be remembered as the most horrific of all time.
When the Battle of the Somme commenced in July 1916, no-one could have known it would drag on for five months and that there would be an eventual death toll of over one million.
Although Joe bravely faced the hell of the trenches every day, he was unaware that his Sergeant held a grudge and wanted rid of him for good.
It looked unlikely that Joe would
SURVIVE THE SOMME

Commando No 4928 – Phantom Frogmen
Corporal Stan Norton and Sergeant Ted Clark — Commandos, frogmen, mates.
But the ruthless Commando rule — if a man gets hurt, he gets left behind, whoever he is — looked like splitting them.
Ted was lying hurt in a well-guarded German army hospital. Stan was on his own in an enemy-occupied city.
But Stan said to blazes with the Commando rules. Ted was in there and he was just naturally going in to get him out.

Introduction:
This is tough Special Forces story. A “men-on-a-mission” classic, it is superbly drawn by Rodrigo, especially when, naturally enough, the action goes underwater. His thick, dark inks really give the impression of the murky depths of the ocean and the eerie final resting place of a downed Lysander aircraft.
However, once we get back on to dry land we are straight into all-guns-blazing mode for a Commando tale that never lets up until the final page.

Commando No 4929 – Biplane Alley
Tom Wills was desperate for adventure and wanted to be a pilot during World War II. Unfortunately, his flying skills were not up to scratch and he ended up as a clerk in the Pay Corps.
However, he seized upon the opportunity to join a ragtag group of flyers led by a maverick World War I veteran. Major Richard Joyce used ancient biplanes from the Great War to harass German and Italian forces in the North African desert. In their Gypsy Moth planes, armed only with long-fused bombs and Webley revolvers, Tom and his comrades literally went under the radar on these daring night raids against the enemy.

Commando No 4930 – Revenge Of The Shadow
The mysterious hooded figure hiding in the undergrowth was intent on vengeance — against S.S. Colonel Hans Meyer and his pack of “Wolves”.
He had already killed several of them silently and swiftly with his crossbow. Now if he could get inside the house, the evil leader of the wolf-pack would only have a few more moments to live…

Introduction:
I do enjoy it when a Commando tale begins in one genre and swiftly changes tack. In this case, we appear to have a traditional air story featuring a couple of plucky Lancaster pilots but it immediately morphs into a taut Resistance piece set in occupied France.
Top class script, interior and cover work all come seamlessly together here for a memorable action story with a little bit of mystery thrown in too.
Scott Montgomery, Deputy Editor
Revenge Of The Shadow, originally Commando No 1126 (May 1977), re-issued as No 2452 (March 1991)