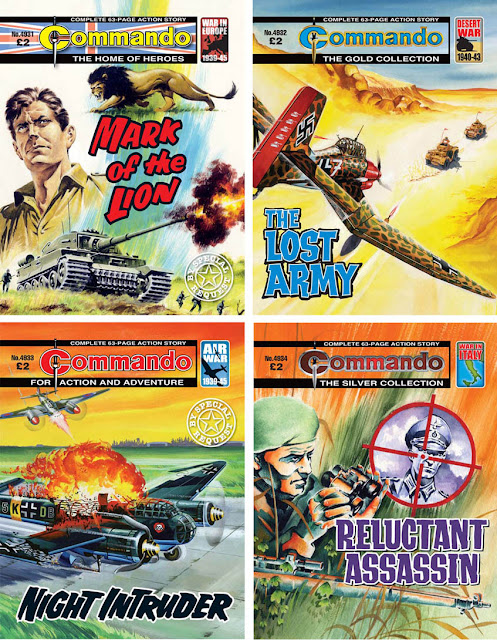 Here are the details of the four issues of Commando that will be in the shops on Thursday...

Commando No 4931 – Mark Of The Lion
Sergeant Bill Marsh seemed to bear a charmed life — or so his men said. Time after time he missed death by a hair’s breadth. What his men didn’t know was that Bill had been told by an African witch-doctor that he would be killed by a lion — and there weren’t any lions in France.
Or were there? Nobody could foresee the monster which Bill would soon have to face.

Introduction
Only in Commando can you begin with a framing device that takes on the form of a mystical African curse, which then encompasses the retreat at Dunkirk via the development of a top secret, prototype enemy super-tank. Meanwhile, our hero thinks that he is invincible ever since he is cursed to be killed by a lion — and that seems unlikely in France.
All of these plot threads are expertly woven into a fantastic script by veteran author C.G. Walker, with great art by C.T. Rigby and a wonderful montage cover by Ian Kennedy.
My thanks to reader Bob Whalley for suggesting that we revisit this gem of a story from yesteryear.
Scott Montgomery, Deputy Editor
Mark Of The Lion, originally Commando No 608 (December 1971)

Commando No 4932 – The Lost Army
Strange things happen in the African desert — especially in the “Region of Devils”. But these three lost L.R.D.G. soldiers had never seen anything as weird as this…being helped in their desperate mission by Persian soldiers straight from the pages of history 2000 years ago.
“Prof”, Jack and Duncan didn’t know whether to be glad — or just plain terrified!

Introduction
Courtesy of interior artist Jose De La Fuente, this book is full of stunning imagery— of a lost Persian army from 525 B.C. seemingly returned to fight in the arid desert of North Africa in World War II.
However, one of my favourite sequences is much more straightforward but still typically dynamic — on page nine, one of our Long Range Desert Group heroes manages to bring down a Stuka dive-bomber armed only with a Thompson submachine gun. Fantastic stuff, and there’s a great cover from the sadly-missed Ken Barr too.
Scott Montgomery, Deputy Editor
The Lost Army, originally Commando No 222 (July 1966), re-issued as No 867 (September 1974)

Commando No 4933 – Night Intruder
Pete Owen was a fine pilot in a Mosquito night-fighter squadron, with a growing number of kills to his name.
Then he shook everybody by flying his plane, complete with the latest top-secret radar, across the Channel into German hands. He’d been playing a traitor’s game all the time, it seemed.
But why was he now in a German prison camp? And why was he spending every minute planning an escape? All he’d get in Britain would be a firing squad.

Introduction
This air/espionage/Prisoner-Of-War genre-twisting yarn is wonderfully illustrated by Repetto. He drew five Commandos book — of which this was the second — but over a short, if fairly prolific, period between November 1967 and March 1969. It’s a pity he didn’t do any more, as his line work is detailed and dynamic, and his night scenes are very atmospheric. And the late Ken Barr wraps it all up with a typically dramatic cover.
My thanks to reader Geir-Erik Nicolaysen for suggesting that we revisit this classic.
Scott Montgomery, Deputy Editor
Night Intruder, originally Commando No 307 (January 1968), re-issued as No 1011 (March 1976)

Commando No 4934 – Reluctant Assassin
The order was simple — “Kill Mackheim”. The reason was also simple — he was a masterful German general who could thwart the Allied advance in this region of Italy.
Captain Harry Brown, a skilled assassin, was already in the area, operating with the partisans. He was the obvious choice for the job, but there was one snag — he had lost the will to kill in cold blood…

Introduction
Alan Hebden is a name familiar to UK comic fans. Incredibly inventive, his scripts appeared in the likes of Battle and 2000AD in their 1970s glory days and beyond.
Alan’s first Commando credit was “Night Of Fear” (No 984, November 1975) and he has continued writing for us ever since. Indeed, the author’s popular, long-running “Convict Commandos” series will continue in the near future.
This story, however, shows how Alan can take what might initially appear to be a straightforward premise but he puts his own, unique spin on it in terms of characters and plot. So, just what would happen to a killer who lost his killer instinct…? Read on and find out.
Scott Montgomery, Deputy Editor
Reluctant Assassin, originally Commando No 2481 (June 1991)

The Lost Army sounds fascinating. I love war stories that have a touch of the eerie about them.