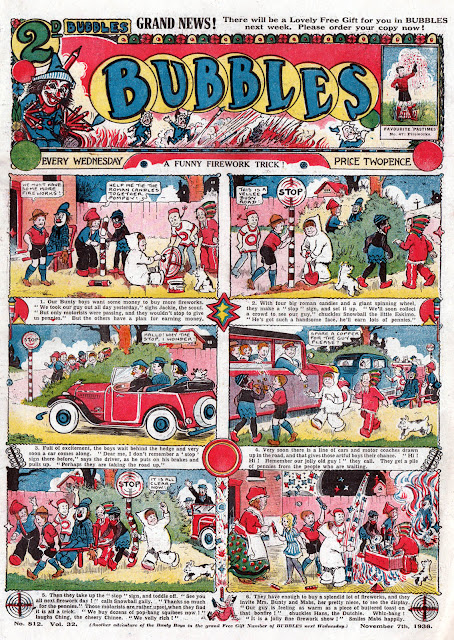 Bubbles ran from 1921 to 1941 and this was the issue that was on sale exactly 80 years ago in 1936. Published by the Amalgamated Press (who would later become Fleetway), Bubbles was aimed at the 'nursery' age group that today would be called "pre-school comics".

Unfortunately, being a product of its time, there are quite a lot of racial caricatures in the comic. I found it somewhat disturbing because of it's very young demographic, indoctrinating infants to use racist slurs practically from the cradle. I'm sure it wasn't intended to be malicious, but it's still unsettling to read it from a 21st Century perspective. I've chosen not to show the more alarming strips but even the cover features some stereotypes. It could be argued however that the cover strip has a positive aspect in that it shows kids of all races being friends.

Inside the comic, there's an advert for a free gift in the following issue. I wonder if adults of 1936 saw free gifts as "tat" in the way that some modern collectors do? I'm sure the kids enjoyed the toy anyway, just as they do with today's gifts. 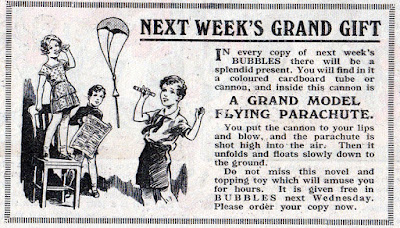 Bubbles had 12 pages (4 more than most A.P. comics) and a good variety of humour and adventure strips, plus prose stories. Here's one of the adventure serials, Lonely Nan, with a firework theme. And yes, if you owned a dog you had to have a Dog License back then. 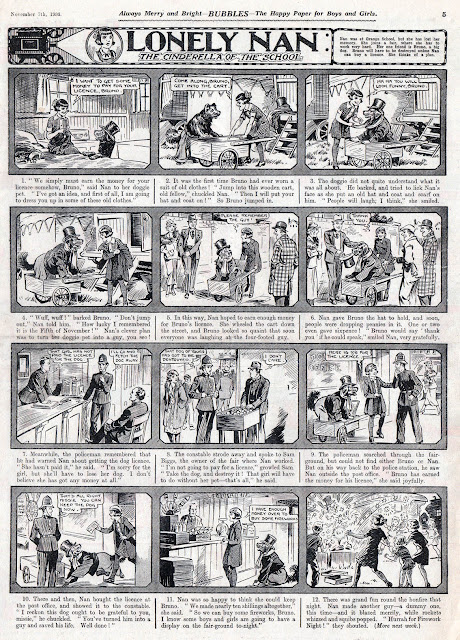 The centre pages featured several short humour strips in spot colour. Fun at Mr.Croc's School seems to be a spin-off from Tiger Tim in The Rainbow comic. 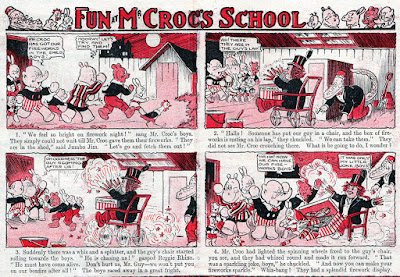 Piggy and Wiggy, The Porker Twins...

Molly and her pet puppy Peeko. Keep the fireworks away from your dog, Molly! Good grief, nineteen thirties, you were reckless.

One thing you'll notice is how fireworks were treated so carelessly in these old strips, as though they were harmless lights rather than miniature explosives. All that would change a few decades later of course as the comics behaved more responsibly. These days, the Halloween issue has replaced the old traditional Firework issue of a comic. I can understand why times have changed, but firework comics made for some good visuals in comics.

I'll be showing another classic firework edition in my next post.
Posted by Lew Stringer at 02:16

Actually, you still see strips about Bonfire Night. This week's Beano has Tricky Dicky and Billy Whizz strips themed around the day. We even see fireworks at the end of Billy's strip.

I am not sure it is really fair to judge older comics by today's standards. Standards and ideas change over time. To ask someone from the 1930's to anticipate what those are gong to be almost 100 years in the future is to my mind asking a bit much.

That's kind of what I was saying, John. As I said, I don't think the racism was intended to be malicious, but it's still unsettling from a 21st Century perspective. They were more naive times, when the "other" were casually labelled with terminology that mocked them. I suppose at the time it was considered to be no different than labelling someone "shorty" or "fatty" but in reality it's considerably worse to belittle other races as it becomes part of the dehumanisation of foreigners and their culture.

I wont make too many comments about the race side because it's not different then current terms like calling something 'fatty' because they can and has (more often then see) lead to suicides and major life problems. If it's offensive, it's offensive. cutting it up into sub-culture of offense is no major difference. human nature sadly. If there is no people from another country, it goes to smaller groups. and smaller. I remember at school a lot of the kids were 'They are from ANOTHER School! We hate them, lets beat them up" kinda rubbish.. then you have the Masons and such like groups, you fight with others not in your group etc..

anyway.. best not to talk about.. What I wanted to say about is this:
a much neglected area of British Comics is Newspapers. While people kinda know the National strips like garth, Andy Capp etc, local ones go completely missing and have been mostly dropped these days.. I think partly for the lack of local talent but mostly because newspapers, becoming more and more magazine like with there ... highly bias 'news' and reporting 'what people want to hear' like the latest gossip and half-arse reported story. that haven't been fantastic in the past but some can be much better..

anyway, Since I'm heavily involved with the oldest Bonfire Society in the world, Battel (using an old spelling of the town), I go through a lot of archive material including old newspapers. The Local "Sussex Express", had there Children's Corner. In the Friday 8th November, 1935. We see a 4 panel comic strip showing 'Bonfire night in Petville' by an artist who just signed his name 'Tim'. Interestings bits of note, the artist signs his name, smaller companies seam to have been far better then larger ones about this kinda thing.. while there is a little bit of text after the panels telling the story, you do get a complete 4 panel word balloon told comic strip.. Two years before the dandy which still gets reported too often as being the first to not use captions under the frames.
http://www.battelbonfire.co.uk/SussexExpress_Friday_November_8_1935.png

Thanks for that, Manic, I'll check the link out later. There was a cartoonist called 'Tim' who drew Bengo and Bleep and Booster in the 1960s. Not sure if it's the same one. My old Mac's running a bit slow today so I'll look it up when I'm on a different device.

that would be William Timym for bluepeter.. possible but I think unlikely. mostly cause he didn't move to the UK till 1938 (he was from Austrian)