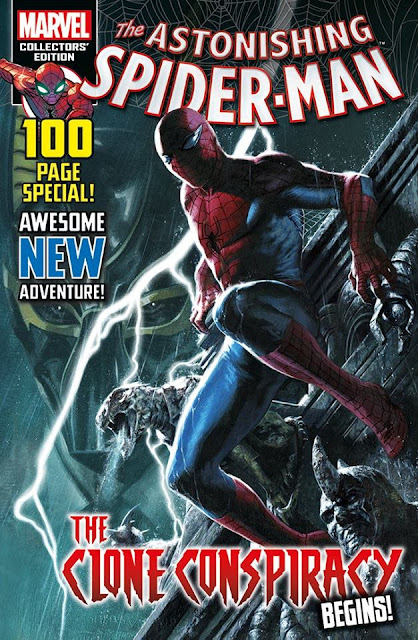 The latest issue of Panini's fortnightly Astonishing Spider-Man comic is a bumper-sized 100 page edition that begins The Clone Conspiracy saga. Ideal as a jumping-on point for new or returning readers. There are twists and turns coming up in the issues ahead so get in on the start. Available from WH Smith and selected newsagents.

Here's the info from Panini...

Astonishing Spider-Man Vol.6 #20. On sale 11th May 2017. 100-page special of astounding action-packed arachnid-adventure! Only £3.99!‘The Clone Conspiracy’ begins! The Jackal is back and has conquered death!How is Spider-Man going to stop him, especially when he has an army of super-villains at his side?!!Plus: De-powered and outnumbered, how are Spidey and Silk gonna rescue Chronosaurus Rex from HYDRA and fix the timeline?!!
By Dan Slott, Christos Gage, Javier Garrón, Jim Cheung, Ron Frenz, Giuseppe Camuncoli, Robbie Thompson and Todd Nauck.Includes material reprinted from Amazing Spider-Man #19-20, Free Comic Book Day: Captain America: Steve Rogers #1, The Clone Conspiracy #1 and Amazing Spider-Man/Silk: The Spider(Fly) Effect #4.
Posted by Lew Stringer at 15:34

I rarely buy TPBs, but my impatience led me to buy THE CLONE CONSPIRACY. I will still buy this comic, though, refresh my memory (and I buy it, anyway).

I've found a lot of sequels to comic arcs to be underwhelming. I didn't enjoy SECRET WARS II as much as its predecessor; each CRISIS event at DC has been less than the last; and there are numerous examples of other events that weren't as good as the originals.

However, I really enjoyed THE CLONE CONSPIRACY. As a sequel to the 90s THE CLONE SAGA, I found it to be damn good - and very profound in places. I rate it highly.

I think a lot of people are suffering "event fatigue" as Marvel and DC heroes move from one major crisis to another every year. I'm struggling to show enthusiasm for Secret Empire...

Agreed, Lew. Isn't there something called GENERATIONS to come after SECRET EMPIRE? I am fatigued, too.

I loved it when we had occasional arcs in the 80s: SECRET WARS, ACTS OF VENGEANCE, etc.

I also wish we could see more standalone stories. Thinking about the current Cap Hydra saga, whether one likes it or not, if it'd had been done decades ago, it may have been a three-parter (akin to the Galactus trilogy), done and dusted within a few months.

There was a Cap story in 1969 where Cap and the Red Skull exchanged minds due to the Cosmic Cube. It lasted about four issues, and even then felt dragged out. (It wasn't one of the best Cap stories.) These days, some story arcs are far too long I think. That said, I thought the 30 plus issues of Superior Spider-Man worked well, but Hydra Cap seems very slow.

It's not just Marvel of course. Much as I like the current Superman and Action Comics stories at DC, the saga of defining who the "real" Superman is has taken a year of fortnightly issues and there's still elements that won't be resolved until next year.

I don't mind something taking a while, i.e. The Superior Spider-Man. I enjoyed every issue of Knightfall, too. And I'm certainly glad the original Galactus tale wasn't done and dusted in one issue, that would have felt too rushed.

I'm not a fan of the TPB format dictating the number of monthly issues, i.e. we must do a six-issue arc in order to sell the TPB. Some things do drag on for too long.

I suspect it'd be the same now if the Galactus story was being done for the first time; it could be a year, the first few issues hinting at his presence, the next few issues having the battle - and the final issues being an "epilogue".

There's also a matter of the modern development of "decompressed storytelling" that drags out scenes over several pages. The old style comics packed a lot into one issue but today's U.S. comics are a breezier read. As a result they feel poor value when one pays three quid for a five minute read.

I seem to recall - and this is one example - someone like Superman mentioning he needed to travel to another galaxy in an old comic. A panel or two later, it was something like "Superman arrives in said galaxy." And then he does whatever he needs to.

I suspect a modern story would have Superman taking several pages to fly to that galaxy.

You mention a breezier read. I'm currently reading the Marvel Epic Collection for Black Panther. It's taking me quite a while to read each issue (70s, I think). Today, well I must confess, it does give me a WOW moment (not always in a good way) when it takes me five minutes to read something which cost me £3+.

And it's not even like we get something such as Stan's Soapbox or a letters page nowadays (quite a few titles lack a letters page). At least when I was dissatisfied with older comics, I'd say to myself, "Oh well, let's enjoy Stan's soapbox or read what other readers have to say."

That got me to buy the graphic novel which I liked and am pleased to see what is coming out of it.

Now if Panini capitalised on it then all the better.