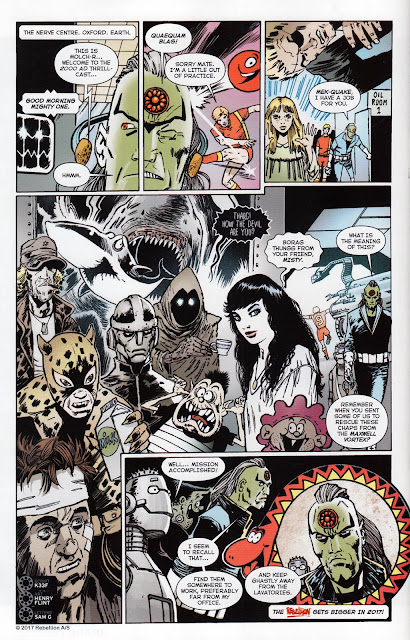 If you picked up the 2000AD issue for Free Comic Book Day last Saturday you'd have seen the surprise last page that re-introduced classic IPC/Fleetway characters into the 21st Century. As you know, last year, Rebellion (publishers of 2000AD) gained the rights to the IPC comics from 1970 onwards. They'll soon be reprinting selected classic strips in their Treasury of British Comics series of books, so this new strip by 'K33F' and Henry Flint is a nice fun taster, and shows the characters being integrated into the Rebellion universe.
See how many you can recognise!

If you missed the 2000AD Free Comic Book Day issue, here's the cover to look out for. Unlike the weekly, it's in the U.S. comic book format. Your local comic shop may still have copies, or if not, you may find copies on eBay at a reasonable price.
Posted by Lew Stringer at 18:00

"See how many you can recognise!" Okay, I realise you might be being rhetorical, but I always love trying to identify characters in these kind of crossover compilations. So: panel 1, Tharg (naturally) and Max from Scream/Eagle's 13th Floor. Panel 2, Roy "of the Rovers" Race and Whizzer and Chips' Odd Ball. Panel 3, Rosemary Black from Misty#s Moonchild and One-Eyed Jack from Valiant. Panel 4, clockwise from bottom left and spiralling in to the centre: Charley Bourne from Charley's War (I think. This is the only one I am not sure of), Buster's Leopard from Lime Street, Battle's Major Eazy, Monster Fun's Gums, Action's Hookjaw, Scream editor Ghastly McNasty, Misty editor Misty, Shiver and Shake's Sweeny Toddler, Buster's Faceache, and finally Blake Edmonds from Death Wish in Speed (and later Tiger, then Eagle).

Thanks, Unknown. No, not rhetorical. I thought it'd be a bit of fun for people to identify them. Yeah, that bandaged character has stumped me too. I think it's Charley Bourne but not sure.

You missed out Frankie-Stein and Sid's Snake in the final panel. I don't think it's Charley Bourne due to the hair and sideburns but I am beggared to give an alternative answer.

It's heavy shading rather than sideburns, Colin, but you're not the one one who thought that.

A very pleasant surprise to see Frankie Stein there. I thought he might be a complication given his runs either side of 1970.

Several years ago, when Egmont were planning to revive Frankie Stein, IPC insisted they owned it and the project was dropped. Perhaps Rebellion have come to some agreement with Time Inc.