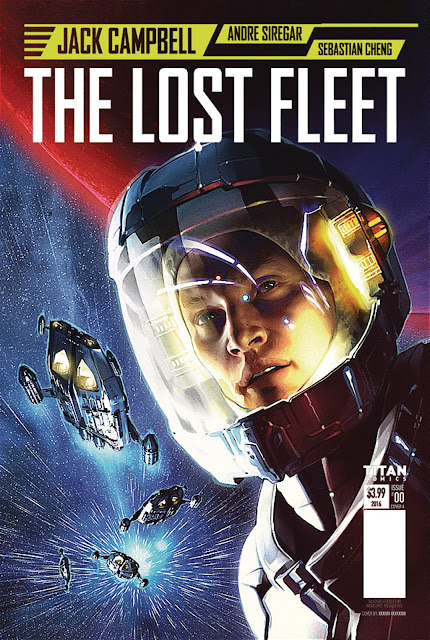 The prolific Titan Comics are soon to launch another new British comic in the form of The Lost Fleet - Corsair No.1 in June. As with all Titan's comics, this will only be available from comics speciality shops, so to make sure of a copy (as shops sometimes under-order) please order it from your nearest comic shop. Cut-off date for orders is Friday 12th May, so place your order now!


Last call... the Final Order Cut-Off for Lost Fleet - Corsair #1 (on sale in June) in the UK is FRIDAY 12TH MAY and in the US MONDAY 15th MAY. That’s when fans have to place their orders for the book with their local comic shop.
(You can still order from comic shops after these dates, but orders placed before this date are more likely to influence how many copies a store actually orders, and therefore make the book more of a success. The more orders the better!)
Authored by John Hemry writing as Jack Campbell (author of the New York Times best-selling The Lost Fleet novel series and much more), this is a series I'm editing for Titan Comics, illustrated by André Siregar (Martian Comics, Severa) inked by Bambang Irawan, coloured by Sebastian Cheng (The X-Files, Orphan Black) and lettered by Jim Campbell.
Lost Fleet: Corsair is set shortly after the end of a century-old war between two space empires, the Alliance and the Syndics. It centres on the story of Captain Michael Geary, who has been missing in action after the Syndic ambush recounted in the fist Lost Fleet novel, Dauntless, that almost destroyed the space fleet John “Black Jack” Geary had to get home, against all odds.
You can order Lost Fleet: Corsair from any good comic shop and it will also be published digitally via ComiXology and more. 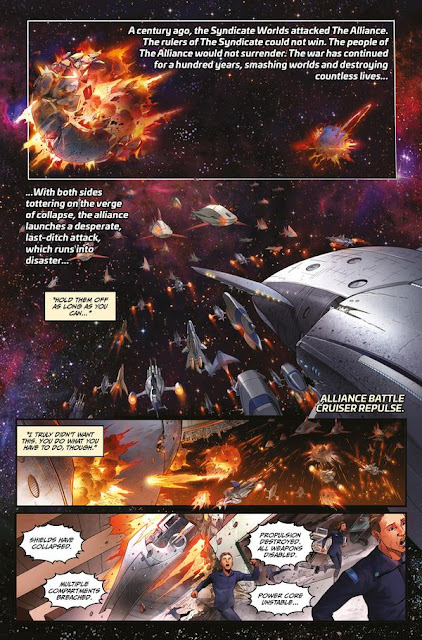 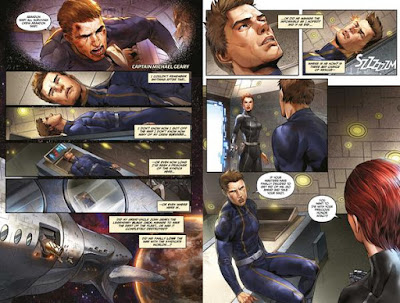 MICHAEL Geary! Yeah, wondered what happened to him...... Want this.

By all means read some of the novels first. Unless that spoils this story... this one is -after- the big space war? Then you should be okay with [Dauntless].

Doubtful whether Michael Geary (the established story has two other Captain Gearys, including Mike's sister) becomes an actual corsair; the book titles are mainly Alliance starship names. And maybe spoilers, in for instance [Victorious]. ;-)

Looks like my kind of thing, Lew. What it might lack in originality it looks like it makes up for with some lovely art, I will be checking it out. Is there any chance you can post a higher res version of the lower double page spread?

Afraid not, CZX. That's the largest images Titan had.

I've never read the novels, Robert, but I hope you'll enjoy the comic.

That double page spread is actually a single frame on one page! Thanks to everyone above for their interest and your plug, Lew. The meaning of the "Corsair" in the title will be revealed in #2. If you're a fan of Lost Fleet, I've been posting imagery in the Facebook "Lost Fleet" group, where John Hemry also lurks: https://www.facebook.com/groups/172583651591/

Thanks for the additional info, John. Best of luck with the comic! (If you'd like to copy me in on any info for future issues I'll plug them here.)

The characters in the Jack Geary novels starred complaining about the cover art, specifically the original American editions - they expect and evidently get for their war memoirs Black Jack striding boldly across battlefields with at least one very large gun, when actually he is space fleet commander and he never beams down (except a lot later when he's on holiday: and, although love for Star Trek is an important ingredient in this work in John Hemry's mind, they don't beam. I think they do have the tractor ray. It is not often used as personal transport.)

All that may be a big in-joke and Mr Hemry delighted with his covers, but British copies of the books are different; we get spaceships, stars, planets (and gigantic frowning eyes: this must be meant as Jack Geary looking out of the window, something else that they don't have, at his reflection). The catch is that they don't look like the ships that Hemry describes in the story, which are shiny and smooth with shark-like contours, not for space aerodynamics but because apparently phaser beams - excuse me, hell-lances (isn't that an awkward name?) - are liable to bounce off from a glancing blow.

So anyway, my interpretation of the promotional art is that this time the spaceships are the right ones!