A new start for The Mighty World of Marvel 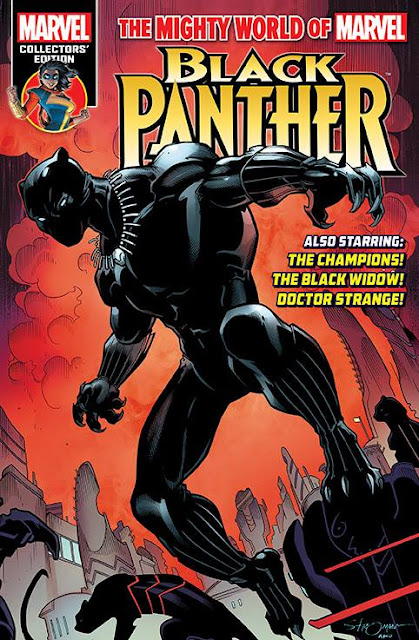 The Mighty World of Marvel (Vol.6) No.19 is in the shops now, with Black Panther on the masthead again for the second issue running. Here's the info...


I don't know what sales have been like across the UK but last month's MWOM which began the Panther's adventures sold out quickly in towns around here. Curious then than next month, the Silver Surfer replaces him as the main star of the comic. As good as those Dan Slott/Mike Allred Silver Surfer stories are, making him the cover star is a seemingly strange move considering the Surfer isn't currently in a movie or game. It coincides with MWOM starting a new volume with a new No.1, but it would have been nice for the Panther to remain the masthead star for a little longer, considering the movie is still out and he's in Avengers Infinity in cinemas next month. That said, the Black Panther stories will continue in the new volume so fans of T'Challa should still be pleased. 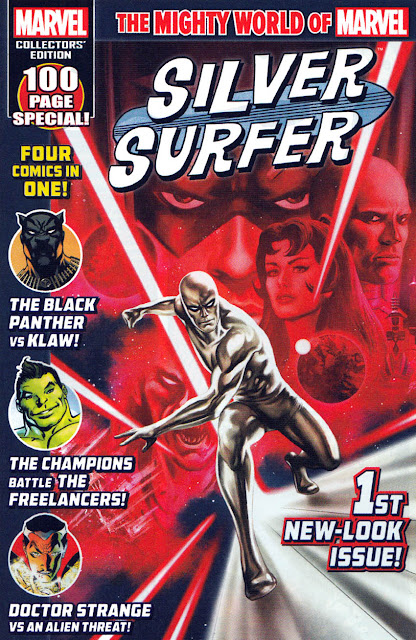 Agree bit of a strange one this, especially as MWOM tends to launch a new volume around a movie rather than the other CEs which are more major event in the storylines led. Glad surfer is back though

Great comics, but, once again, no letters page in MWOM. I really don't know where this lack of appetite for sending in letters has come from.

Years ago, someone complained that I get too many letters printed in the CEs (as does Kevin Barron). Well, if you're not gonna write in yourself, people like myself and Kevin are going to fill that page. Either write in or don't, but I think a comic without a letters page is disappointing.

I'm going to take a break from writing to the CEs for a while. If that means constant blank pages (Marvel Legends' last two issues have lacked a letters page), then so be it. It's time for others to write in.

You have a letter in Combat Colin No.2 anyway, Stephen, and I'm grateful you sent it in. It's a shame when an indie comic gets more letters than ones on the newsstand though. I don't understand why Panini don't receive more letters for their comments, especially as it's so easy these days with email.

Sorry, should be comics not comments. Auto correct went wrong!

So MWOM relaunches at No.1 yet again - for the 346th time or thereabouts! And yet, back in the '70s Marvel UK never relaunched comics with a new No.1 despite plenty of obvious opportunities - Spider-Man Comics Weekly was radically transformed into Super Spider-Man & The Superheroes (new name, new landscape format) but kept the same numbering!

The world of retail is completely different to how it was in the 1970s unfortunately, Colin. A relaunch supposedly encourages shops to order more copies. I'm not convinced they actually do though.

Yes, I'd like to see evidence that a relaunch encourages shops to order more copies.

Some have also said it attracts new readers. Does it, though? If 100,000 "John Does" buy a new first issue, but then don't buy subsequent issues, what was the point?

Where it can be odd (Panini and Titan do this) is when there's a new first issue, but a tale inside might be, say, 3 of 6 or something. Newer fans might expect a first issue to have tales that start at the beginning. MWOM is great, but when folk pick up the next #1, Black Panther will be on its third issue, Champions will be the second part, etc.

I agree about the timing, Parry, MWOM (which will now be on volume 7) should've relaunched two issues earlier, when Black Panther started. Champions' story in that issue was a one and done.

I am reaching the point where I feel that US and UK comics should stop the renumbering and simply have month/year on the cover.

In the case of US comics, it can make it hard to find certain issues on eBay or comiXology. Finding Daredevil #598 is easy, but good luck with finding the right Wolverine #1.

They'll carry on with the renumbering for as long as it works for them. While comic shops are still eager to increase their orders for first issues, and collectors believe they're getting an investment (which they rarely are), it makes business sense to continue doing it. Even Superman gets another relaunch this summer.

The main problem with US comic relaunches is they tie up money from retailers, who then have less to spend on independent comics. They know that doubling or tripling their orders on yet another Wolverine No.1 will probably bring them more revenue than five copies of a new indie comic. It's a sad situation.

As for UK comic relaunches; I don't think it works. Supermarkets operate on a totally different system to comic shops, with the computer automatically adjusting orders based on existing sales. Newsagents often have to do what their suppliers tell them, and suppliers treat comics like a brand of baked beans or whatever (according to my local newsagent anyway). A relaunch has little chance of increasing its circulation in those circumstances.

Thanks, as ever, for the insight into semantics and the more esoteric aspects of distribution, Lew.

It's amazing what goes on behind the scenes, stuff we are not privy to.

Incidentally, and this is a self-absorbed statement, constant relaunches/renumbering make it a pain to find a title via eBay or comiXology. I can find Daredevil #598 no problem if searching eBay or comiXology, but if I'm looking for Wolverine #1, I bet I'll be there all day.

A friend of mine found it confusing when Marvel's Darth Vader was renumbered recently. The first volume got to 25 issues, but then it renumbered. He picked up the wrong trade (I don't know the full details). If we just kept to old numbering, it might be less hassle.

Incidentally, I was thinking about Marvel UK's Spider-Man Comics Weekly, which ran from 1973-1985. 666 issues in total (eerie, eh?!). It changed its name at times, e.g. Spectacular Spider-Man Weekly, Super Spider-Man TV Comic, The Spider-Man Comic,, etc. It had cosmetic revamps, e.g. I remember some with a lot of imagery from Nicholas Hammond's show. But it was still the same title. And 666 issues is an impressive run.

Perhaps a cosmetic revamp or two would be preferable to renumbering. I will also say that I got a letter printed in 2000 AD a while back, and I did ask them if they'd ever follow the US lead and renumber. The editor told me no and that they were proud of the number of issues under their belt.

I too thought it was strange they would abandon Black Panther so quickly from the cover considering he's in two movies this year. Silver Surfer seems an odd choice of replacement. Seems a rather random time to renumber too.