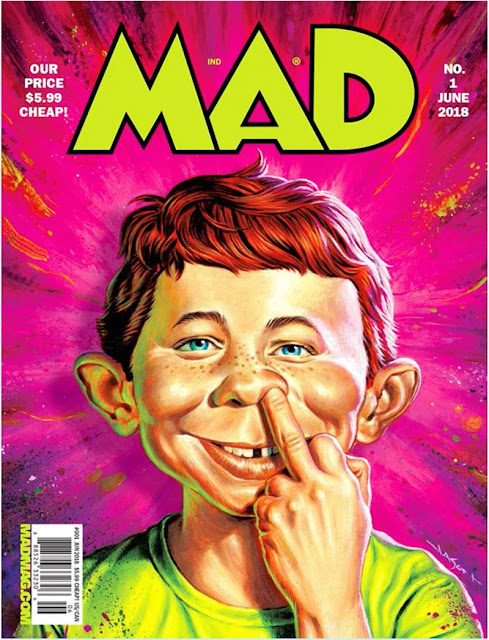 I don't cover American comics here very often but this news is worth shouting about. E.C.'s long running Mad magazine is getting a new look next month and a restart with a new first issue. The new logo is based on the original 1950s masthead, and there'll be more emphasis on comics content.

There was of course a British edition of Mad that ran for many years. These days, the U.S. edition can be found in UK comics shops (if they order it) and selected newsagents (a couple of months after it goes on sale in the USA).

For more info on the new Mad, check out the blog of Tom Richmond, one of the artists:
https://www.tomrichmond.com/blog/

Keep up to date with developments at the Mad website:
http://www.madmagazine.com

Mad No.1 is launched on April 18th in comics shops.

Email ThisBlogThis!Share to TwitterShare to FacebookShare to Pinterest
Labels: Mad

I must admit I rarely buy it now, but I did buy issue 550 (the last of the old series) and will definitely be buying the new first issue if shops stock it.

I've never read MAD, never seen it on sale and didn't know there was a UK edition.

There seem to be quite a few comics you've never read, Colin. Which comics do you buy?

I have been getting MAD since 2016 (I did irregularly get UK version back when I was a lot younger) so will definitely get the new-look issue.

Didn't Dez Skinn have a hand in the British version of MAD? As I recall, it sometimes spoofed home-grown stuff such as 'Minder'!

Yes, Dez was the editor for a while. British Mad required some new pages to be created because it published more issues a year than the U.S. edition. They also did a Coronation Street parody which you can see here:

The Australian Mad magazine is still being published. It's been going since 1980 and has original Australian content in addition to US reprints.

That's interesting! Thanks John. There was also a Swedish edition. Not sure if that's still around.

I have been getting MAD for about 12 years now and in the last couple of years it has become very poor. The Beano has sharper writing. Yes really.

Interesting you should say it's a few months behind in the UK, as I noticed the "final issue" in my local newsagent in Belfast last week, with news on the back page of the reboot. Maybe they're no longer behind over here?

That issue came out six weeks ago in the USA but it does sound like the gap has narrowed. It used to be about eight weeks. Thanks for that info, Phil.