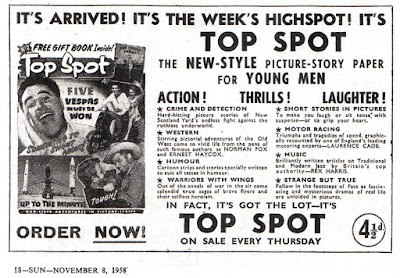 Here's a half page advert for Top Spot No.2, a comic published in 1958 that was aimed at the male teen/adult audience. All part of a drive in some British comics of the 1950s to try and appeal to older readers (long before the current trend to do so). The ad appeared in Sun Weekly; no relation to the daily paper that later used the name. 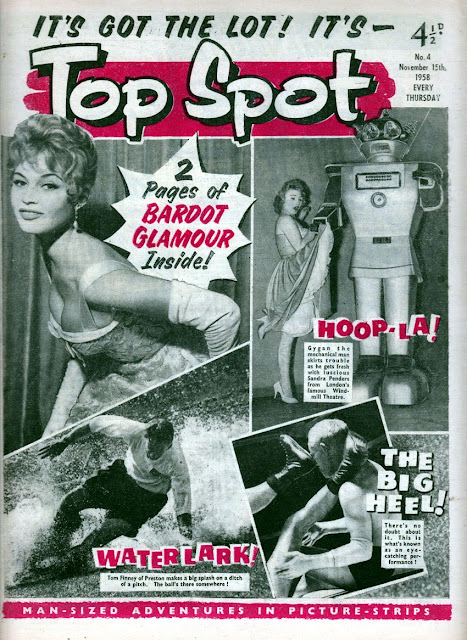 Top Spot didn't prove successful unfortunately, despite desperate attempts to lure its target audience of "young men" by putting cheesecake shots on the covers. You can read my blog post about the comic here:
https://lewstringer.blogspot.co.uk/2011/01/top-spot-clint-of-1958.html 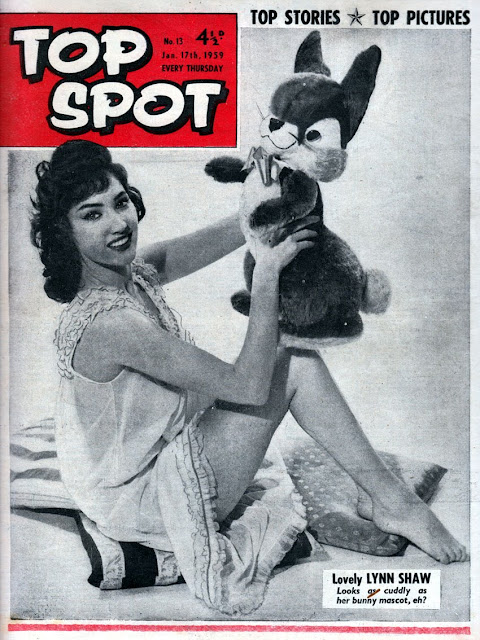 I've never heard of Top Shot but I clicked on the link to your previous post which was very interesting! It mentioned CLINT and I did read a couple of issues of that but I thought the violence in the strips was too much. I'm not a prude but the OTT violence wasn't my cup of tea I'm afraid.

That's fair enough, Colin. I enjoyed CLiNT at the time but I don't like gore in stories now so tend to give stuff like that a miss myself these days.

It's a bit of a stretch calling this a comic. It looks more like a Titbits type magazine for young men. Would have sold well in NAAFI shops at Army camps were young bored men were cursing their luck at being the last intake of a National Service soldiers!

Well, if we can call Eagle, Boy's World, TV21, Look-In and other publications that featured strips and features comics, then why not Top Spot?

Using the venacular of the 50s, birds on the cover! That is what surely takes his publication out of comics and into the world of slightly tacky pulp mag for young men. Would have loved to see what they would have come up with as a free gift edition. A Woodbine perhaps?

The free gifts were a tie clip in No.1 and a book with No.2. It's shown right there on the covers, Ken. I guess you didn't follow the link, or you'd have sen that later issues featured comic strip on the covers.

Incidentally, the idea to put curvy women on the covers of comics to appeal to male readers was common usage at the time. See numerous American comics for example. Top Spot used photos instead of artwork but that's the only difference.