BIG EGGO returns to the BEANO! 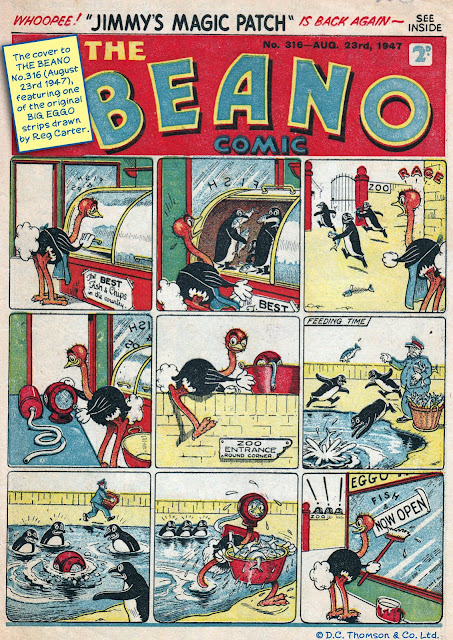 He was the very first Beano character that readers saw when The Beano No.1 arrived in July 1938 with the funny ostrich as the cover strip. He remained the cover star for ten years until Biffo the Bear replaced him in 1948, and now Big Eggo makes a comeback in Beano No.3295, on sale this coming Wednesday.

The creator and original artist of Big Eggo was Reg Carter (1886 to 1949) and now it's my honour to become the new writer and artist of the strip. The editors at D.C. Thomson contacted me a few months ago to produce a new series of Big Eggo mini-strips that will appear inside the Beano from this week. 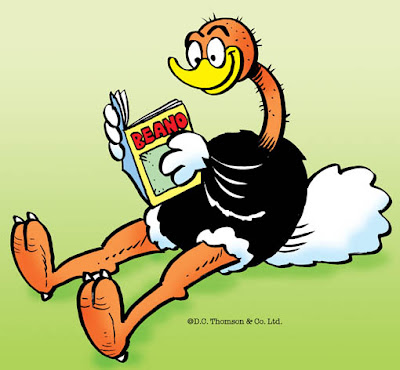 The brief I was given was that Big Eggo has escaped from Beanotown Zoo to search for his egg, but he is pursued by Terry Tuff, a hunter who wants to capture the ostrich and return him to the zoo. Due to the new series only having three or four panels per strip, some weeks will focus on Big Eggo looking for his egg, whilst other weeks will see him eluding Terry Tuff's daft traps. He'll also be interacting with other Beano stars from time to time.

A few years ago I suggested to the Beano that Big Eggo could make a comeback so it's a pleasure and a privilege to have the opportunity to create new stories featuring such a classic character. Why has the strip been revived after so many years? Well, this year is the Beano's 80th anniversary, so I'd guess that D.C. Thomson felt it was only right to bring back their earliest character.

Look out for the first Big Eggo in the new series in Beano No.3295, on sale Wednesday 7th March.

Email ThisBlogThis!Share to TwitterShare to FacebookShare to Pinterest
Labels: Big Eggo, The Beano

Good you are back too...

Thanks, Peter! Hope you enjoy the strips.

The brief is a tried and tested theme that's created some quality material over the years, in both cartoons and comics. Very interested in seeing what you do with it, particularly in a three or four panel format. The artwork looks top notch.

Looking forward to sneaking a peek at my little girl's copy of the Beano next week.

I'm used to dealing with the mini-strip format so I always enjoy that rhythm of storytelling (although a half page would help with timing) so I hope your daughter enjoys it.

As has been said, the theme’s not new: we’ve had Ossie from Wow and Elephant on the Run from Cheeky (both Robert Nixon) along with Knockout’s Boney, all being pursued by someone or other. If someone at DCT’s been man (or woman) enough to say, "Worked before, maybe it’d work again, all credit to them; historically, they haven’t taken many risks. Rereading the Beezer, it’s amazing how long Col. Blink’s premise ran, a short-sighted twit who keeps mistaking Auntie for a lampshade, Rover for a rug, etc. Stable but dull, I’m afraid. Fingers crossed this time.

The stories are aimed at children who won't have any knowledge of Wow, Cheeky, or 1940's Beanos, so the premise will be fresh to them.

Congratulations Lew!,
Will you make any character design changes?

Not particularly but he's drawn in my own style as you can see from the example above, so there are stylistic differences between mine and Reg Carter's version.

To be fair, many of the parents of the current Beano readership won't be old enough to remember Wow or Cheeky either.

Anyway, because I forgot to say so before, congratulations on returning to the Beano and getting to work on the original cover star. Although you've been a professional cartoonist for quite some time, as a comic fan you must have had a bit of a geekgasm when you got the gig.

Absolutely, Kal. It's always a thrill to work on classic characters. Although I'm not the sort to pursue characters created by others it's always exciting when they're offered to me.

This looks like a ton of fun Lew. This is right up my street and I'm sure the current Beano generation will get a kick out of it too!

The panel with the penguins in the Fish and Chip shop being busted by Eggo is one of my all-time favorites! Congratulations Lew, great news!