Out now from Panini UK 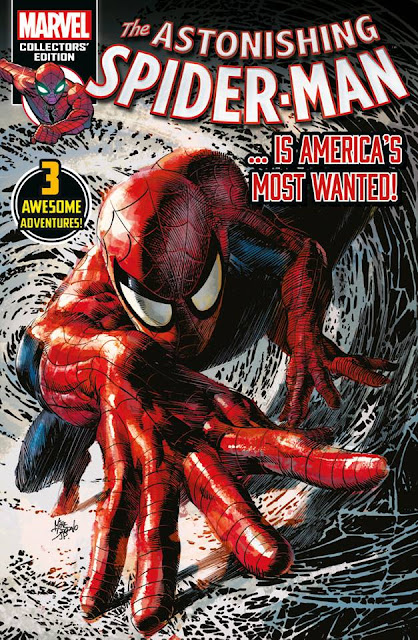 That title went through various changes; Super Spider-Man, Spider-Man TV Comic, Spidey, and others.. and led to other Marvel UK comics such as The Exploits of Spider-Man. The current one, The Astonishing Spider-Man, has been running since 1995, and has been the most consistent. Apparently it's the most popular of Panini's Marvel Collectors Editions as it's the only one published fortnightly instead of every four weeks. It's had various re-numberings, and the current issue is Volume 6, No.42 which goes on sale today.

Astonishing Spider-Man Vol.6 #42. On sale 15th March! 76 pages packed with arachnid-adventure! Only £3.99!
Peter Parker is on the run and hunted by the NYPD! (So, business as usual.)Also: How did Normie Osborn become the CEO of Oscorp, and what does he have planned for Spider-Man?!!Plus: The Wall-Crawler vs. The Sleeper! ‘Nuff said!By Chip Zdarsky, Adam Kubert, Juan Frigeri, Ryan Stegman, Nathan Stockman, Mark Waid, James Robinson and Gabrielle Dell’Otto.Includes material reprinted from Peter Parker, The Spectacular Spider-Man #297, Amazing Spider-Man: Renew Your Vows #10 and Amazing Spider-Man: Family Business: Original Graphic Novel.

There's also a monthly Spider-Man magazine for younger readers that features some comic strip material. This has also gone through a few title changes and for several years it featured all-new Spider-Man strips by British creators. Sadly, it now features American material. 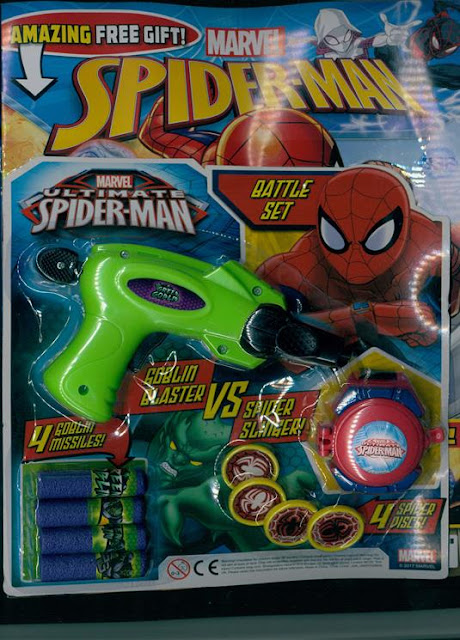 Cover image of the junior Spider-Man comic from this site:
http://www.newsstand.co.uk/108-Primary-Boys-Magazines/3297-Subscribe-to-SPIDERMAN-MAGAZINE-Magazine-Subscription.aspx

It's a slight variation that this time the police - or a corrupt infiltrating secret society, no not Hydra - are after Mr Peter Parker, not Spider-Man. The story is reprinted from "Peter Parker, The Spectacular Spider-Man", but the cops don't know that. :-) Peter returns to his New York apartment building just before teams of armed police charge in to arrest him... or to try.

The Normie Osborn story is from "Renew Your Vows" continuity, an alternate setting which undoes the undoing of Peter's marriage, and gives him a daughter (again). I've bought some of these in the American editions and missed some, so there are still surprises.