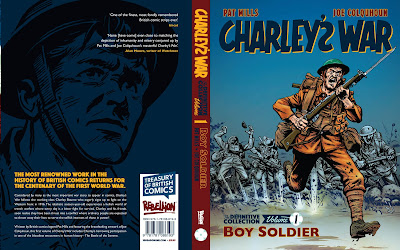 As a child growing up in the 1960s I used to avoid war stories in comics. They often seemed too gung-ho, treating war as a great adventure. To be fair, IPC's Battle Picture Weekly portrayed a grittier side to war, but I was already swerving it because I thought it'd be like previous war comics. Plus I was in my mid teens by the time Battle arrived on the scene so had eschewed most British comics in favour of the adolescent power fantasies of Marvel and DC.

Somehow or other though I did pick up Battle (by then renamed Battle-Action) in 1980 and was immediately hooked by Charley's War, clearly an anti-war strip, there in the middle of a war comic. The fact that it had the superb writing of Pat Mills and art by Joe Coloquhoun (whose Football Family Robinson I had admired in Jag back in 1968) made it even more compelling. This wasn't the light-adventure style he'd employed on the Robinsons though. This was a more brutal and realistic approach. (I've since bought the first 250 issues of Battle as back issues and can now appreciate what a great comic it was in its early years.)

Charley's War quite rightly won the admiration of thousands of readers, and has been reprinted a few times over the years. Now, Rebellion are to collect the entire World War One saga in three chunky volumes as part of their Treasury of British Comics line, and Charley's War The Definitive Collection Volume 1 will be published on April 18th. 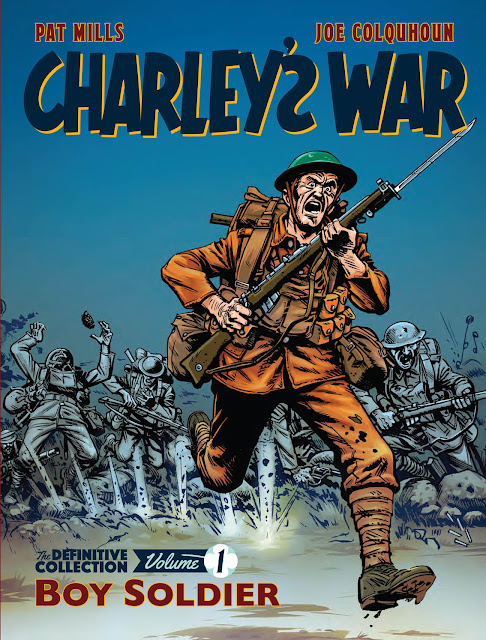 The 320 page first volume is certainly true to its definitive title. The artwork has never looked as sharp and clear as this. It's also been re-lettered by Jim Campbell, as the original printing used typeset (Battle's only real mis-step was that use of typeset). The few pages that were in full colour were greyscale in previous reprint books, but here they are in colour as intended.

There's also a couple of bonus items at the back of the book in the form of full colour Battle covers that featured Charley, and seven pages of Pat Mills' commentary on the stories.

Charley's War is the war story for people who hate war stories... but it's also for those who love war comics too, because it respects those soldiers who endured so much suffering and made great sacrifices. It's a war story that champions bravery and condemns cruelty, whether that be the sadism of the enemy or that of some British officers Charley encounters. It's a true epic of British comics, starting with Charley Bourne as an idealistic, very naive 16 year-old and taking us through his journey of hardship and courage. There's humour too, - the black humour of the trenches that was part of the necessity to survive such conditions.

Charley's War is an essential read. Buy it.

Here's the PR from Rebellion...

Considered by many as the most important war story to appear in comics, Charley’s War follows the working class Charley Bourne who eagerly signs up to fight on the Western front in 1916. The idealistic sixteen-year-old experiences a hellish world of trench warfare where every day is a bitter fight for survival. Charley and his friends soon realise they have been thrust into a conflict where ordinary people are expected to throw away their lives to serve the selfish interests of those in power! Written by British comics legend Pat Mills and featuring the breathtaking artwork of Joe Colquhoun, this first volume of Charley’s War includes Charley’s harrowing participation in one of the bloodiest encounters in human history - The Battle of the Somme.

As a taster, here's the first chapter, originally published in Battle-Action No.200, dated 6th January 1979... 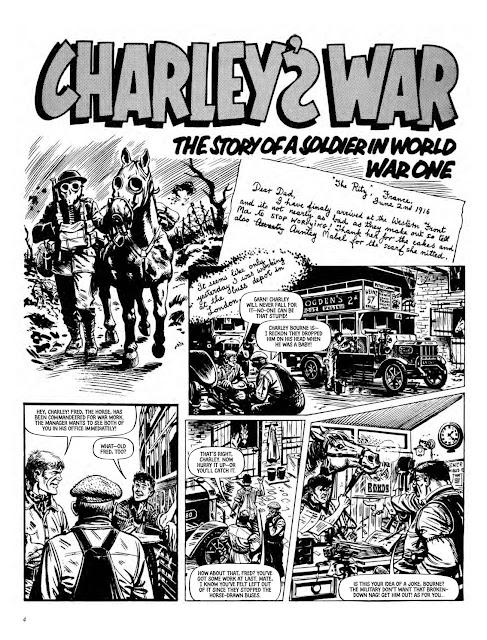 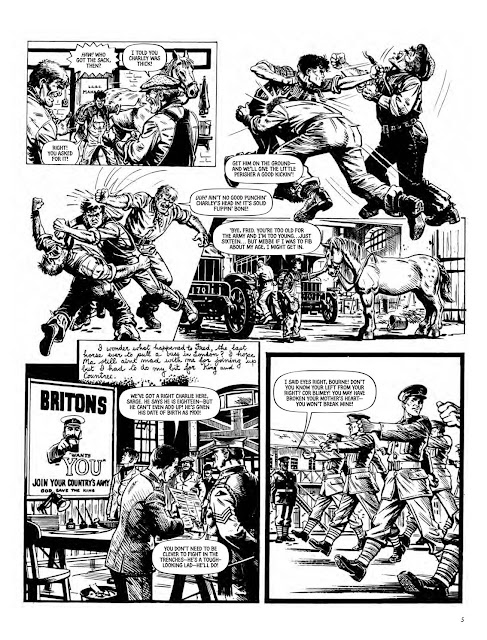 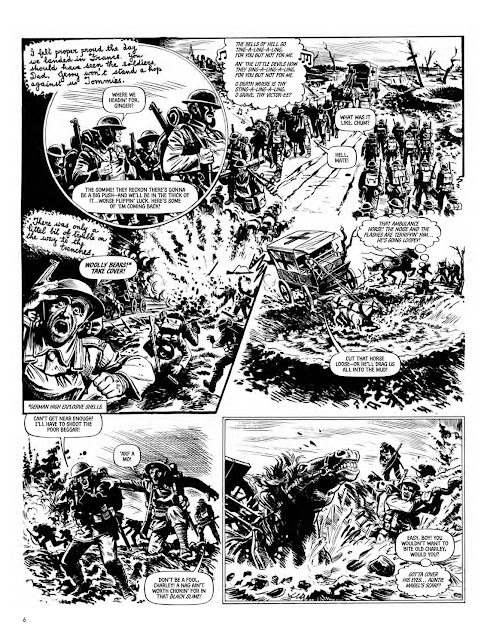 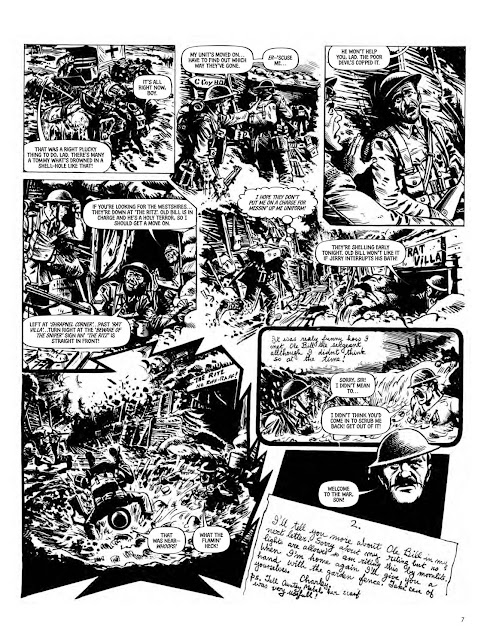 Hi Lew. Out of interest, what does it mean when the originals were type set - is it not possible for Rebellion to reproduce the artwork/lettering as it originally appeared? To me the new lettering looks a bit out of place (too modern somehow). Can we be sure the original script hasn't been fiddled with to remove, I dunno, any language we might not find acceptable in 2018? It all seems a bit Star Wars Special Edition to me.

Typeset means using a mechanical font. These days there's a range of good computer fonts but back then it was literally typed onto paper and stuck on. It looked a bit dead, or so I thought anyway.

The pages are scanned from the comics and cleaned up, so, yes, they could reproduce them exactly as they originally were with typeset balloons, but hand lettering usually looks better. (Well, it's not exactly hand lettering. Jim created the font and it's based on his lettering but he's applying it.)

I doubt they'll censor any dialogue. I don't think Pat would stand for that. :)

And then I read Charley's War (when Eagle reprinted it in the 80s). Johnny Red was another good one.

Charley's War is bleak. It's character-driven. You care about everyone. The personalities are fully-formed. And it tells a very good story.