New issues of Commando out today 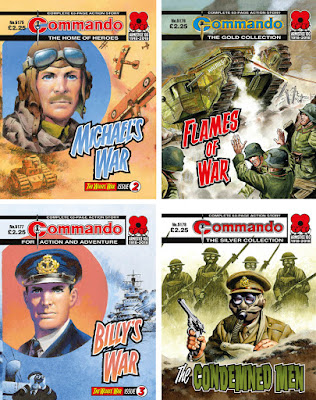 While his family fought on land and the sea, Lieutenant Michael Weekes took to the sky in his Armstrong Whitworth FK8, sweeping over German archies in the lead up to the Saint‑Mihiel offensive. Reconnaissance and fighter, Michael’s plane did more than its fair share of shooting.

But after crash-landing behind enemy lines, armed with only his Webley revolver and wits, Michael Weekes came face to face with a front of a different kind…

A line on a map separated British and German colonies in East Africa, but that meant nothing to Tom Denning and Hans Block. They had always been friends as boys, but when war came in 1914, they were put on opposite sides. It made them enemies.

And then they were both posted to France to experience the horrors of trench warfare at first hand. There their friendship would face its toughest test ever in the flames of war…

Lieutenant Billy Weekes wanted desperately to see some action aboard the British Destroyer HMS Meadfoot. He had two brothers in the trenches, one in the skies, and a sister on the front line as an ambulance driver. They would all have amazing stories about their war experiences, but Billy… all he had to talk about was the weather reports.

That is, until a U-boat went rogue after ignoring the order to return to port, and the HMS Meadfoot was tasked with bringing it in.

The chances of survival were poor for the officers and men in action in the trenches during the First World War. They all knew it, and courageously got on with the dangerous job at hand.

One British officer found this harder than most, though. He was as brave as the next man, but he had a secret he knew he must try to keep to himself – a secret so frightening it will chill your blood…