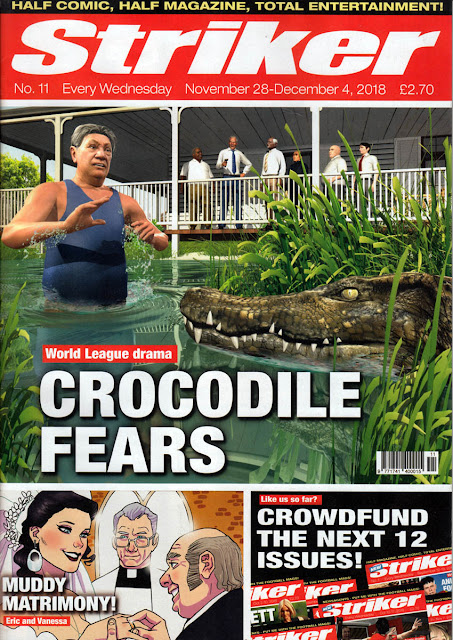 Weekly British comics are sadly a rarity these days. There's Beano, The Phoenix, 2000AD, Striker, and (in digital form only) Aces Weekly. It was good to see Striker return to newsstands this year after an absence of 13 years, thanks to a successful Kickstarter campaign. Now, after 12 issues, it needs your help again.

Publisher Pete Nash has launched a new Kickstarter campaign to fund issues 13 through to 24 of Striker. At least £45,000 is needed, and it's already off to a good start with the figure up to £13,755 as I type these words.

What is Striker? It's a 32 page football comic about fictional team Warbury, told in comic strip form using CGI techniques. The strip itself has been around a looong time, starting as a newspaper series in The Sun in 1985, and as a newsstand comic that ran from 2003 to 2005. That's the shorthand version. You'll find the long, complex story elsewhere. 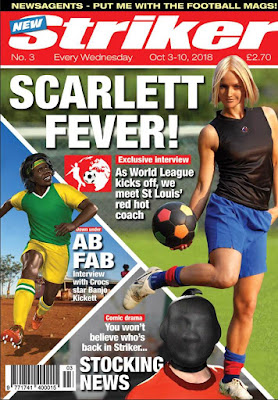 Striker doesn't just focus on the match. The current story involves gangsters, and crime often features in the storylines. The comic may not appeal to everyone. It definitely has a "bloke down the pub" feel to it, and although it's pitched at all ages, the scenes of semi-nude women in the first run of the comic were controversial. An aspect that has wisely been absent from the new series of comics.

An acquired taste then, but Striker is a comic that deserves respect. Like The Phoenix, it fought against beliefs that WH Smith would not take new comics that are not based on a toy or TV show, and got itself out there. Admittedly, it hasn't been without problems. WH Smith cocked up distribution of issue 2, and then told Nash that a later issue of the comic was unsuitable for all ages because it featured a criminal with a gun on the cover. Yet Pete Nash stuck to his guns, if you'll pardon the pun, and the comic is still there.

If you want to back Striker to ensure it survives for another 12 issues, visit the Kickstarter page here:
https://www.kickstarter.com/projects/1672374693/striker-weekly-comic-issues-13-to-24

Remember, no money is taken unless the project reaches its target.

Email ThisBlogThis!Share to TwitterShare to FacebookShare to Pinterest
Labels: Striker

Is Striker on hiatus while the new Kickstarter gets going. It wasn't in the local newsagents this week?

Never quite sure about the wisdom of some Striker covers. A recent headline about "safe sex", again on an illustration of a shotgun, looked darling sandwich ed between the Beano and a couple of nursery titles.

Coincedently, there is a football mage, kickaround, from the When Saturday Comes stable, which has added a text Roy of the Rovers feature. It bills itself as "the decent football mag for young fans!"

Issue 12 will be out tomorrow (6th December) and will be the last unless the Kickstarter proves successful. It'll be a 48 page Christmas issue for £3.50. Hopefully my subscription copy will arrive tomorrow too.

I know what you mean about Striker's tone. It sometimes reminds me of the sort of parents who drag their kids to the pub on a Sunday afternoon and use foul language and sexual innuendo to their mates in front of them. Perhaps that's the target audience? I dunno. There's an advert for a pub on the back of each issue. You wouldn't see that in any other comic. At least they've stopped putting pin-ups of topless women in the comic; something that didn't really suit the first series when it was also running reprints of Billy's Boots and Kangaroo Kid from Scorcher!

I'm afraid I won't be re-subscribing this time. I've supported Striker right from the first issue of the original series in 2003 but... you can't buy everything and I've decided the comic isn't really for me. (I don't even like football, - or gangster stories, which is what the Striker strip has become.) I wish it well, and I know lots of people love it, but I need to prioritise other things. From 2019 I'll only be buying comics I really want, and only supporting friends, not backing projects that have limited appeal to me that only benefit people I've never met.

Back in the day some colleagues from Newcastle were surprised that the London office knew their favourite pubs. We were Viz readers, so we had seen all their ads. Still that's a different kettle of fish.