The year Britain got the Horrors over Horror Comics

I'm not in the habit of reposting old blog posts as it's just as easy for a reader to find an old topic by using the search window. However, I recently read an article which seemed to imply that Britain never had horror comics, and therefore never had an anti-comics campaign. Nothing could be further from the truth! A little bit of research would reveal that not only was there a full-blown media panic over horror comics in the UK in the 1950s, it actually led to a parliamentary bill to deter them!

Here's the full story of what I wrote 8 years ago, accompanied by newspaper clippings from the 1950s British papers... 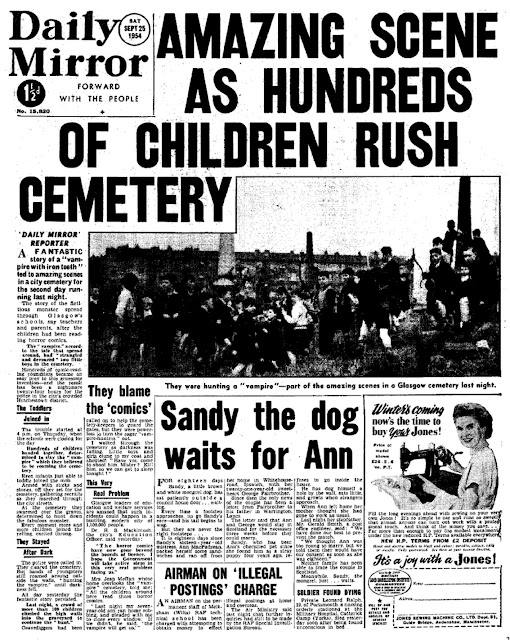 On 23rd September 1954 two Glasgow policemen were called out to witness an alarming sight: hundreds of children, some armed with knives and sharpened sticks, were patrolling a graveyard hunting a vampire.

Thus began the legend of the "Gorbals Vampire" and although, naturally, no vampire was found, a scapegoat for the children's behaviour was: imported American comic books. After this, the floodgates of paranoia opened and the church and media began attacking comics relentlessly.

Just how intense was the anti-comics crusade in the UK? Fierce and hysterical. American "horror comics" became completely demonized in the media and church leaders condemned the stories as being "evil" and actual products of Satan.

I thought I'd research it a bit more and find a few of the actual clippings from the newspapers of the day. Here are a sample, just from September to November 1954, starting with the Daily Mirror's reportage of the incident (above) and then the reports and opinions of the Daily Express as the paranoia swiftly reached fever pitch. Click on the clippings to see them in a larger and more legible size... 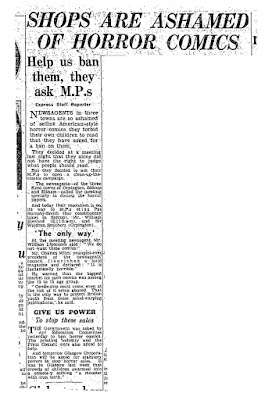 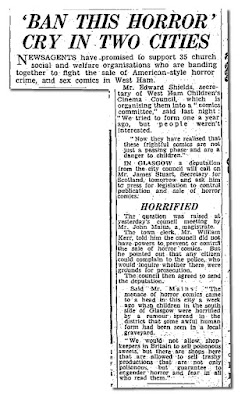 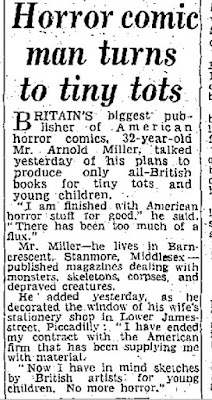 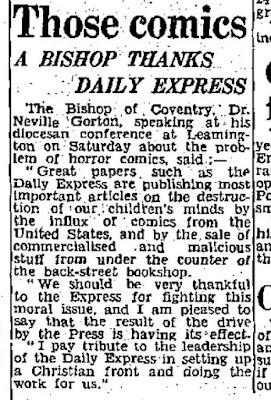 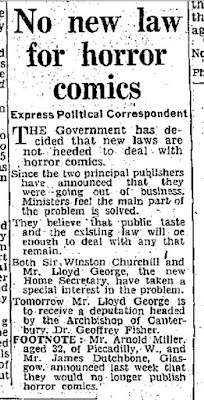 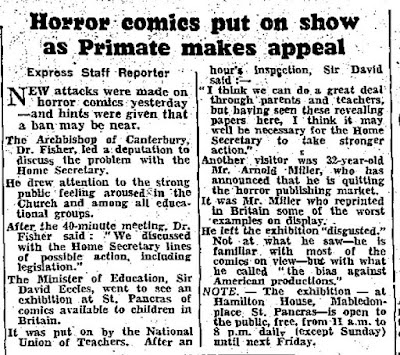 The tragedy of the story is that there was never any foundation that comics were the incentive for the churchyard incident. Not a shred of evidence that comics "warped" children. Millions of comics were sold, yet millions of readers grew up to be normal rational adults. But the seeds of doubt were sown, nasty malicious rumours spread by church leaders and newspaper editors that damaged the reputation of comics forever. The hysteria caused parliament to react. In 1955 the (Children and Young Persons) Harmful Publications Act came into force to forbid the importation or publication of horror comics in the UK that are likely to fall into the hands of children. (Although it didn't seem to prevent the resurgence of the imported horror comics in the 1970s.) Even to this day some people still think there was some truth to the "dangers" of comic books and even amongst some British comic collectors there is an attitude that American comics are inferior and vulgar.

The establishment loves to create demons. A century ago it was "Penny Dreadfuls", in the 1980s it was "video nasties", then video games, and now it's the Internet that's the current scapegoat. Religious leaders and the media are always exploiting the paranoia of the public to hide the unpalatable truth: that humanity is flawed and the dark side comes from within. It's easier to blame external forces that "warp" people rather than face the fact that humans are nothing more than animals one step up from savages.

As readers here may know, several years ago Martin Barker wrote a fantastic book on the UK anti-comics crusade entitled A Haunt of Fears. Exposing the anti-American propaganda behind the campaign it's a fascinating read and well worth tracking down if you can. 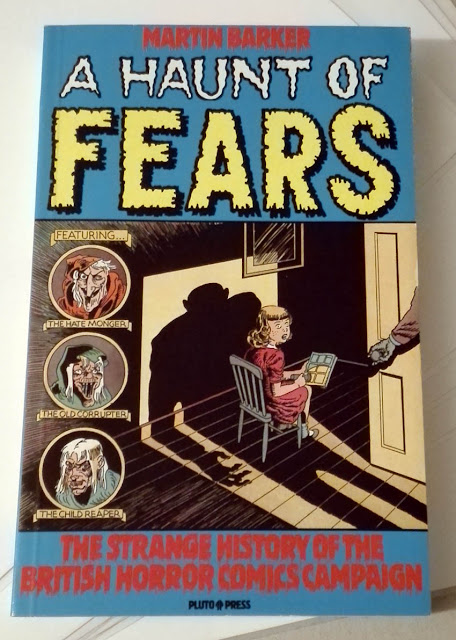 The scan of the cover to Back From The Dead No.1 at the top of this post was taken from the book The Pictorial Guide to British 1950s Sci-Fi and Horror Comic Books compiled by Mike Morley and published by Ugly Duckling Press in 2012. You can read my review of the book here:
https://lewstringer.blogspot.com/2012/01/essential-new-guide-to-british-comics.html 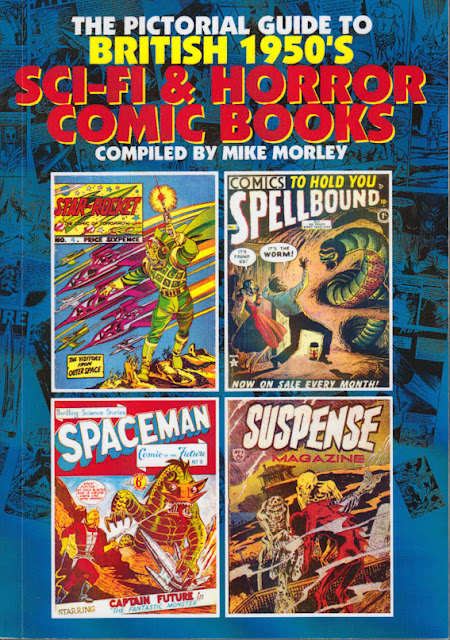 Elizabeth Pakenham must have had the same English teacher as Stan Lee, the poetic hyberhole of that headline!