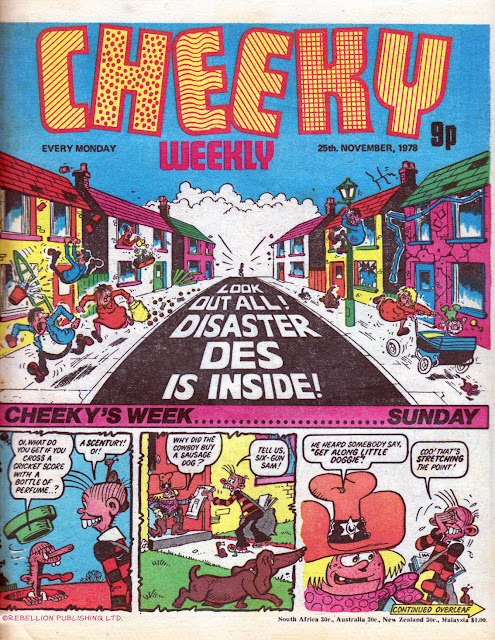 I haven't covered 1970s humour comics that frequently on my blog, mainly because I don't have many! I threw out most of them when I left school and have no regrets. However, I did buy an issue of Cheeky Weekly recently so I thought I'd post a few bits here as I know that, for some of you, it has fond memories.

This is the issue that was in the shops exactly 40 years ago this week. Issue dated 25th November 1978, but as all comics then were dated in advance this would have been in shops on November 18th.

The 32 pager kicked off with a large cover image by Mike Lacey, promoting Disaster Des, one of the characters inside. Beneath the image is the start of the Cheeky's Week strip, drawn by Frank McDiarmid. The strip continued on various pages inside, featuring Cheeky on each day of the week. 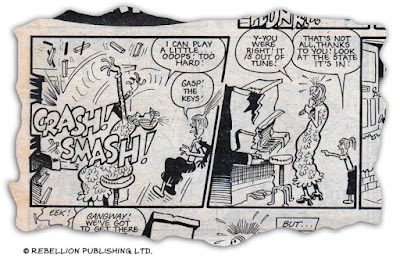 Cheeky's Week featured regular supporting characters, and one of those was a shapely School Crossing Lady. A memorable character for many young readers! 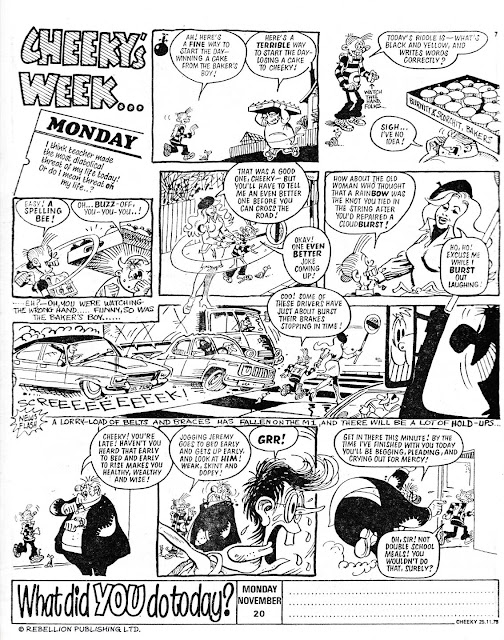 With Christmas only being a few weeks away, the comic carried a John Menzies advert for some games that were around at the time. Prices have increased tenfold since then, but that's not too bad in 40 years. If only comics had increased so little. They'd only be 90p today! 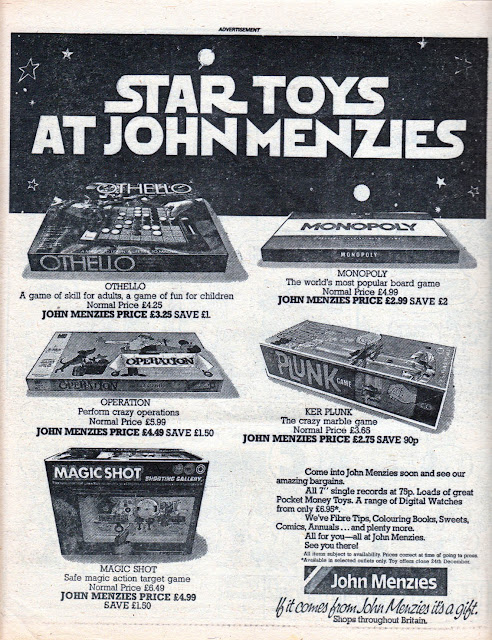 Cheeky featured an 8 page section called The Mystery Comic, with stories that had an element of mystery... except for the cover strip, Tub, it seems!?! Decorative border and logo by Ed McHenry, Tub strip by Nigel Edwards. 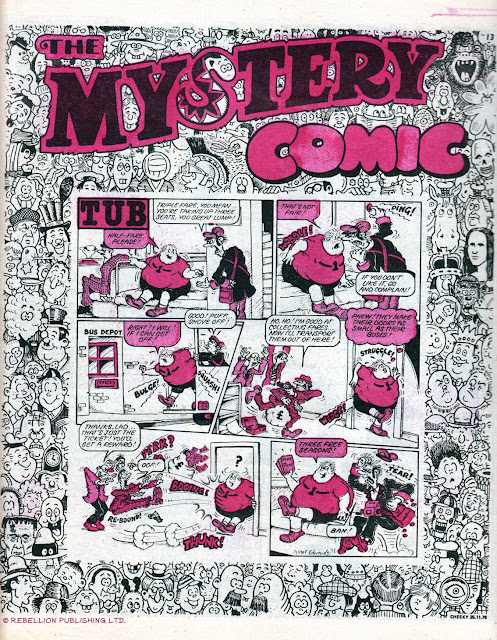 Only two adventure strips featured in Cheeky at this time. One of them being Mystery Boy, distinctively drawn by John Richardson, who also illustrated many covers to Tammy. 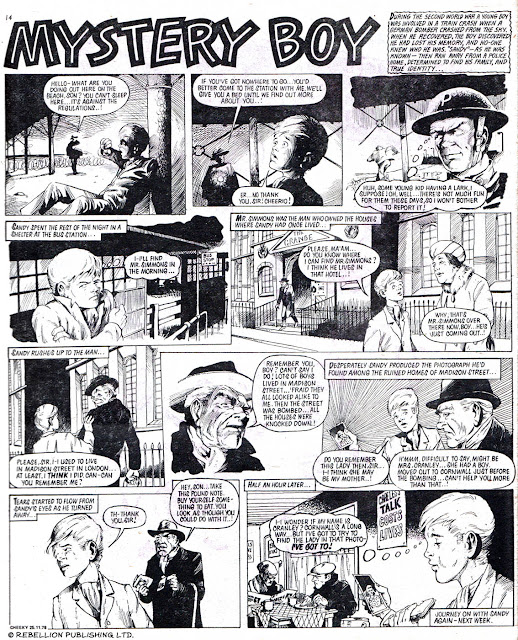 The centre pages of the comic were in full colour, featuring Elephant on the Run, which I hear proved popular. Artwork by Robert Nixon, one of the greats of British comics. 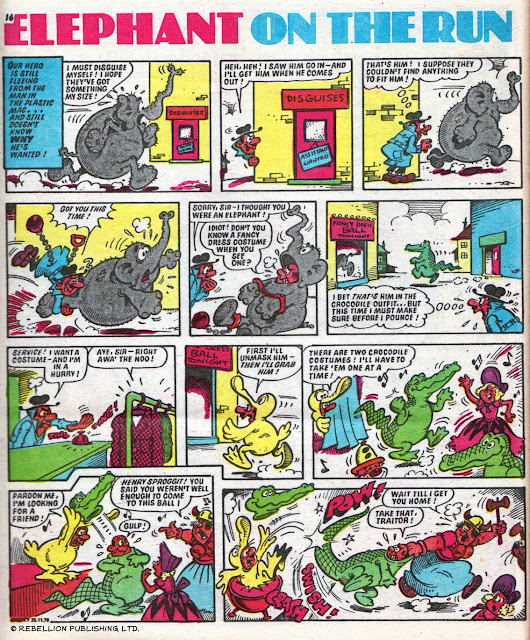 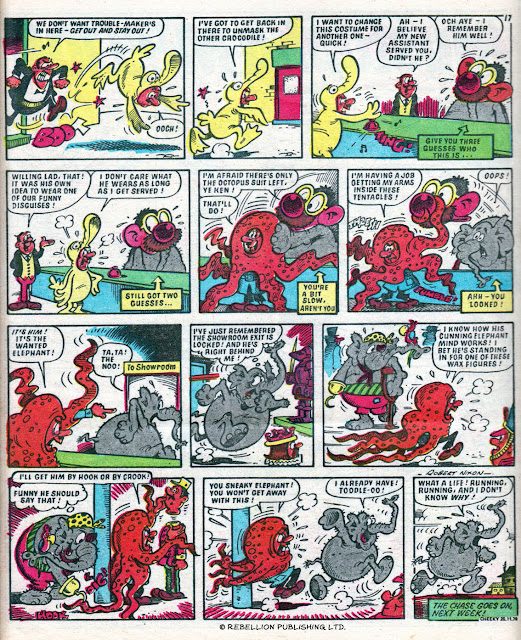 The other adventure strip was The Terrible Trail to Taggart's Treasure, by the master of kids' horror comic strips, Eric Bradbury. 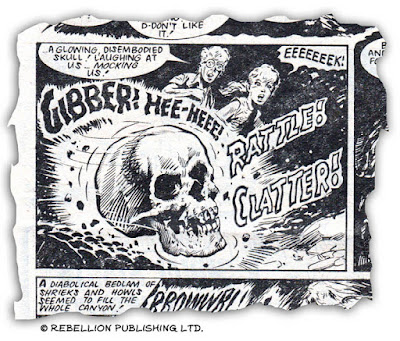 There was also an advert for that year's Krazy Annual. A time when IPC were producing numerous annuals for the Christmas market. 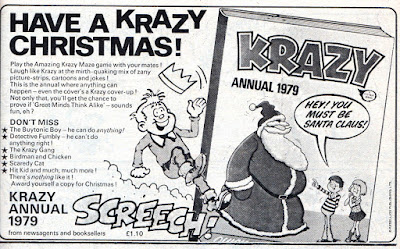 These days, Rebellion own the rights to this material. Is there a potential audience for any collected strips from Cheeky, I wonder? An Elephant on the Run volume might appeal to younger children perhaps? I've no idea if the company plans to reprint any of this material or not, but time will tell!

It's always great to see Cheeky Weekly remembered - a title which is often overlooked in nostalgic reviews of humour comics. Thanks for mentioning the artist who drew the Mystery Boy reprint. I didn't know who it was - will have to update my blog. I've included a link to this post on the blog. I'd like to believe Rebellion will publish a Cheeky collection but realistically I think it's unlikely. The problem with an Elephant reprint is that there was no conclusion to the story!

Thanks, Niblet! I don't know what it is about John Richardson's style but a lot of people seem to have difficulty recognising his work. Even Rebellion credited him as "unknown" in a recent Misty reprint in vol.3, even after they'd correctly identified him for a story in vol.2. Personally I've always found his work distinctive, usually from the way he draws faces.

Thanks for the info on Elephant on the Run! I didn't know it never concluded. The recent series of Big Eggo I did for The Beano had a similar premise but I made sure it had a proper ending.

Loved Cheeky Weekly and really loved John Richardson's art! The one of his I'd like collected is one possibly only I ( and John! ) remember. He did a saucy superhero spoof called Super C.C. for Custom Car magazine and it was brilliant. My older cousin used to buy the mag 'cos it was full of half-dressed girls draping themselves over cars and bikes.
I read an interview with Richardson somewhere where he said he filled the strip with Light-hearted T & A, 'cos he knew nothing about cars. I've only ever managed to find two ( very bad scans ) of strips online, which is a shame, 'cos he really was a great humorous cartoonist.

Cheeky himself should have a book collection...

I think Cheeky Weekly was the best comic of its kind. The idea of a different "support" story for each day of the week - Six Million Dollar Gran as a TV show, vintage reprints from Dad's comic collection in the attic, and the adventure story at Saturday morning pictures - was pure genius. And special credit to Frank McDiarmid : not only did he contribute many pages of artwork per issue, but he created a huge number of characters that Cheeky met during the comic's lifetime (plus the original 'Ello, It's Cheeky story in Krazy that spun off into Cheeky Weekly). I can't praise it enough : it was my favourite comic at the time, I have only fond memories of it, and I'd love to see it collected in book form on quality paper to fully appreciate Frank's dynamic artwork.

Thanks for this! If Elephant on the run was in Viz today, it'd be the one to read first :)

If I'm reading this right, the point of the Shapely School Crossing Lady is how the drivers are reacting to her - more so than most readers would do, I think. Readers who are young enough to put up with these jokes...

"Elephant in the Room" may have been the pitch originally but it didn't go anywhere :-) It's coming back to me that elephants in my childhood had mastered the art of concealment - hiding in fridges, using inconspicuous small cars, painting their toenails (um, how exactly?) Wikipedia's intriguing article on "Elephant jokes" refers to a joke trading cards issue in America in 1960 (I'm not that old) then a craze there for the jokes from 1962 to now, with "millions of people working to construct more". The jokes are gravely analysed, and their role in the civil rights movement although not American politics generally, where both main political parties have the symbol of an elephant, although not the same elephant. That would be confusing.