50 Year Flashback: WHIZZER AND CHIPS No.1 A few days ago was the 50th anniversary of Whizzer and Chips, but I completely forgot about it due to the 40th anniversary of Doctor Who Magazine being on the same day! Anyway, here's my belated post on the subject (which is in itself an updated rewrite of a blog post I did ten years ago)...

Five decades ago, on Saturday 11th October 1969, IPC Magazines launched the first of many humour titles that would propel them to the top of the British comics industry. Whizzer and Chips No.1 arrived boasting the unique selling point of it being "Two comics for only 6d", - 16 page Chips comic was inside 16 page Whizzer. 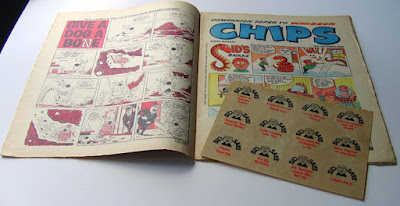 As with most comics of the period, Whizzer and Chips No.1 was promoted on television with short, snappy ten second advertisements and within other comics (such as Smash!) with four page pull-out ads.

In reality, Whizzer and Chips was only ever one comic of course, and, within the walls of IPC, was regarded as such by its editor Bob Paynter. At the time D.C. Thomson's Dandy and Beano each had 16 pages for 4d and IPC knew they couldn't compete on that level, so the illusion of two comics for 6d worked, as Whizzer and Chips seemed better value for money as "two" comics than it would have as one.

Being a rival to Dandy and Beano was obviously the intention, and IPC's clever "two-in-one" marketing technique ensured the success of the comic right from the outset. A comic cannot survive on a gimmick alone of course, and fortunately Whizzer and Chips also had a strong content. Many of the humour strips were created by relatively new cartoonist Terry Bave and his wife Sheila who provided the scripts. Bave had learned his craft freelancing for Odhams on strips such as Sammy Shrink and Baby Smasher. For the early issues of Whizzer and Chips he provided no less than seven pages! One of the most popular, Me and My Shadow, a simple but imaginative concept, can be seen here... Other artists who had freelanced for Odhams also appeared in IPC's new venture. Mike Lacey kicked off with Odd-Ball (which would run for many years by various artists) and Sid's Snake, but the superb Graham Allen was wasted on the limited strip Give A Dog A Bone (a dog tries to hide his bone every week with not-quite-hilarious consequences). Earlier that year, IPC had dropped Mike Higgs' very popular strip The Cloak from Smash! but Bob Painter asked him to create a new strip for Whizzer and Chips. The result was Space School, which, due to editorial tastes, lacked the scope and satire that had made The Cloak so popular, but was still a funny strip in itself... 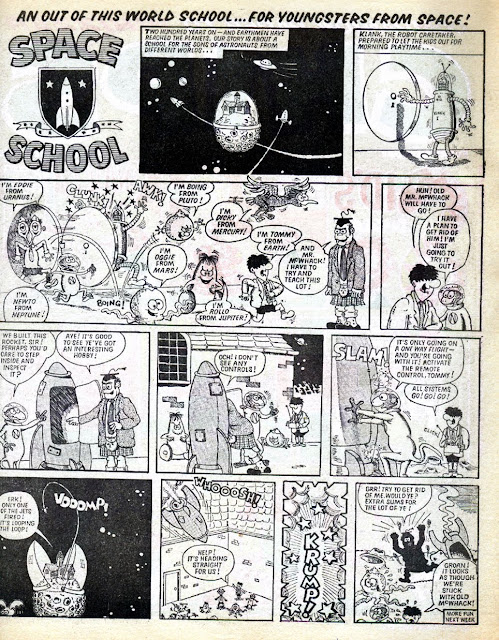 Adventure strips also appeared in the early issues of Whizzer and Chips, albeit fairly lighthearted ones compared to the sort of material that comics such as Valiant featured. 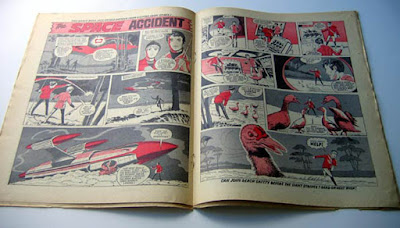 Kings of the Castle was a ho-hum strip about the working-class King family inheriting a castle, The Space Accident was a science fiction strip drawn by Ron Turner, The Spectacular Adventures of Willie Bunk was about a kid with magic glasses, but the standout strip for me was The Stealer, nicely illustrated by Tom Kerr... 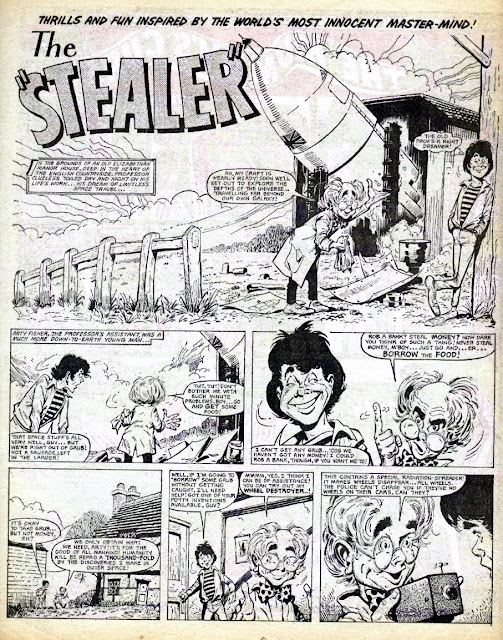 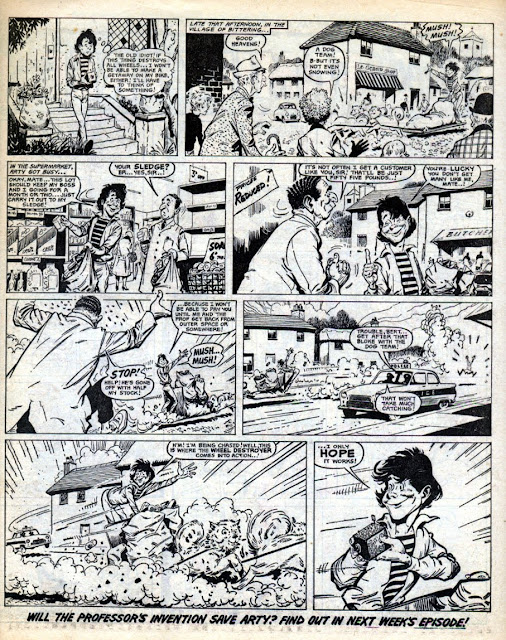 The most distinctive humour pages in the comic were written and drawn by veteran comic artist and comic historian Denis Gifford who presented us with Koo-Koo Klub and a revival of his 1950s Knockout character Steadfast McStaunch. Every week Gifford devised puzzles that McStaunch would need the reader to solve, - a great interactive idea. Whist Gifford is remembered as the author of many books on comics (who also devised tv and radio shows) his inventive comic style has now mainly been forgotten which is a great shame. Here's the first 1969 Steadfast McStaunch, completely written, drawn, and lettered by Denis... 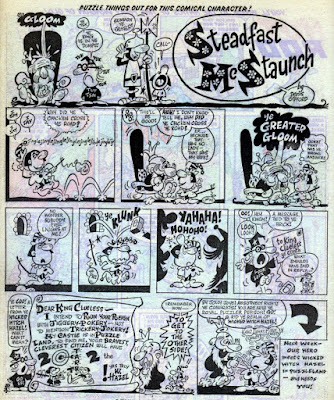 Another gimmick that Whizzer and Chips was renowned for was the "rivalry" between the two comics, where characters from one comic would "raid" the other, - and the readers would have to spot them in backgrounds. That didn't kick off until issue two, however Chips No.1 cover-starred Sid's Snake - the characters that from No.2 would be the cover stars and mascots of Whizzer. The famous cover star of Chips, accident-prone Shiner, didn't appear until the second issue. 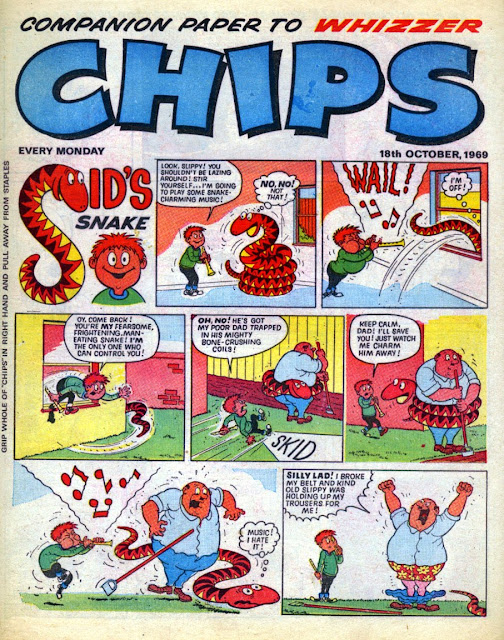 Right from the outset Whizzer and Chips looked slicker, stronger, and better designed than its Odhams predecessors Wham!, Smash!, and Pow! had been. Personally, as a ten year old reading it back then, I found it entertaining but not as irreverent or, well, funny, as the Odhams weeklies had been. The hallmark of IPC's humour comics was "safe" comedy, and Bob Paynter would always encourage creators to be "careful", fearing backlash from parents and retailers.

That said, hundreds of thousands of kids obviously enjoyed Whizzer and Chips immensely, given its long run. Even though I never found Harry's Haunted House anywhere near as entertaining as The Nervs, I still stuck with the comic until my early teens, - mainly due to the solid storytelling and artwork. The popularity of Whizzer and Chips led to the launch of Cor!! in 1970, and many other similar titles such as Whoopee!, Shiver & Shake, Monster Fun, Jackpot, and others which enjoyed varying degrees of success. Even Fleetway's Buster was gradually revamped into an all-humour title to fit within the IPC humour group.

IPC attempted the "two-in-one" gimmick again in the early 1970s with football weekly Score 'n' Roar and humour comic Shiver and Shake. Neither were very successful, proving that innovation is better than imitation. (My theories on Score 'n' Roar's failure can be read here.)

Fifty years ago I remember a schoolmate of mine, Grant Hicks, running around the playground of our junior school with Whizzer and Chips No.1, ecstatic that he'd got "Two comics for the price of one". IPC's gimmick had paid off, and continued to do so for that title for many years.

Companion comics which fell by the wayside, such as Knockout and Whoopee! were merged into the seemingly invincible Whizzer and Chips. Eventually the two-in-one comic's luck ran out. Whizzer and Chips folded in 1990, by which time a drop in sales and budget cuts meant that it contained a lot of reprint and had reduced its total page count from 32 pages to 24, phasing out the Chips insert. Yes, in the end Whizzer and Chips merged into itself, before being swallowed up by the long-running Buster.

Images from Whizzer and Chips are Copyright ©Rebellion Publishing.

I've been told by the editor of Best of British magazine that their latest issue carries an article on Whizzer and Chips' 50th anniversary, so look out for it in your local shops! 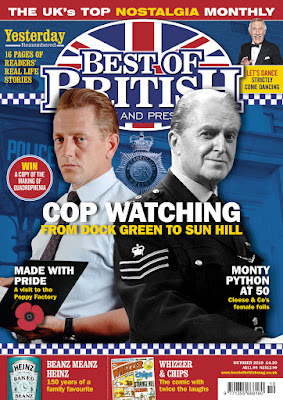 Great blog Lew, scary to think it was 50 years ago that i picked up this issue of Whizzer and Chips, Nice to see Tom Kerrs art, he was always a favourite of mine.

I remember picking up a load of 1969 Whizzer and Chips at a jumble sale in the early 1970s. It was the first time I had comics 'on tap' to read rather than waiting for the paperboy to deliver my Beano each week.

I recall reading once somewhere that W&C was the last new British comic to sell a million copies of an issue.

Thanks for this posting, the memories, and feelings, from when then this came out still stay with me, and am a young 64.

This comic is , to me, as important as the Beano (never got into the Dandy) and would love the whole set to be printed in hardback format so I can relive the adventures from the past on my twilight years.

First I've heard of that, Varszava. Viz was selling a million copies an issue at its peak though.

Oh and I was a Chippite. Much preferred Shiner to Sid. Shiner and Chips felt like the underdog to a 8 year old!

I couldn't get into the rivalry thing. I enjoyed searching for the "raider" every week but "both" comics were so similar I had no preference. I was probably still mourning the loss of comics like Smash! and Wham! which were more my cup of tea.

In the late 70s or early 80s a souviener edition of issue 1 was printed in Whizzer and Chips, possibly a 10 year birthday one? Anyway I seem to recall Kings of the Castle was drawn by Joe Colquhoun who did the excellent Charleys War for Battle. I prefer Chips to Whizzer myself.

Definitely wasn't by Joe Colquhoun, who was busy drawing Football Family Robinson for Tiger at the time. I think Kings was by Mike White.