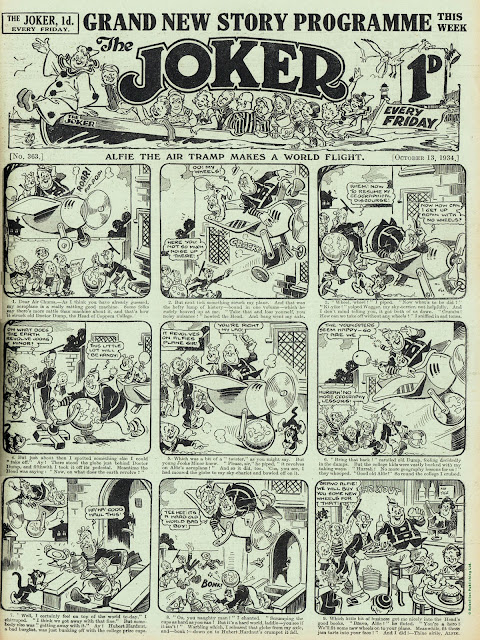 I'm not going to see Joker, DC's darkest movie on their Batman villain. Everything I've seen of it is too nasty for my tastes these days, and, apart from Ceasar Romero's version, I've never actually liked the character anyway!

So... let's look at a cover of the British comic called The Joker instead! (How's that for a segue?) Published by The Amalgamated Press (who later became Fleetway), this was one of the classic weeklies of yesteryear. This is No.363, which was in the shops exactly 85 years ago this week in 1934.

The cover strip, Alfie the Air Tramp, was drawn by John Jukes, one of the many artists encouraged to draw in the style of A.P.'s top artist Roy Wilson. And, of course, the story ends with a reward of food, a definite treat in those days of the Great Depression!

These days, this material is opened by Rebellion, although I doubt we'll ever see a collection of Alfie the Air Tramp strips as it just wouldn't be commercially viable. Most readers who'd be nostalgic for these 1930s comics have sadly passed away by now. The strips are most likely too old-fashioned to appeal to modern kids, so it's only a few of us who are interested in this era who'd get a kick out of it. I hope you're one of those enthusiasts. Enjoy!

Would they get away with reprinting "The Joker" in a plain cover and being mistaken for a movie tie-in... they do have a clown on the front page!

I really feel like something of this era of illustration has been lost. The style of the black and white Disney cartoons from this era is seeing a resurgence, but I'm not seeing the style of comics from the 30s having the same resurgence. I really love this pre-war style, so I'm experimenting using elements of this era in my own drawings. And I'm only 27, so maybe this style appeals to more people than you think, Lew! Here's hoping anyway!

Davy Jones in Viz draws in a style reminiscent of, and spoofing, the 1930s style, and I incorporate elements of it in my style too. It's still around but it's not going to have a significant resurgence in kids comics because it looks dated now. But parts of it have influenced us so it's there in spirit. Good luck with your work.

Yes Lew, I definitely see elements of it in your comic work. Thank you, Lew, and with you!

sadly, the UK is a very small country.. in America, there are THOUNDS of people who like to talk about and enjoy old stuff like the 30s etc.. in the UK, there are much less purely cause they are much less people.. and don't forget, Disney stuff in the 30s were went Walt, who loved animation, was around.. the Disney company today hates animated. (long story but I can give you TONS of reasons for this).. oh and Disney stuff has always been shown world wide.. UK comics? very small.. Hell, look at how it took Irmantas to get a good Ken Reid collection. did great job too ^_^

One of the things that appealed to me about current Viz comics were the several strips done in that pre-war art style, which I'm only familiar with from seeing reprinted pages on here and the older Beano/Dandy archive books. There's something about it I like.
Gotta say, though, shouldn't you have referred to the resurgence in "kids comic"... there's only really (The) Beano now :(

Catch a thief and get a reward fun...
Wonder how the tranp got his plane in the first place...love the headers of these old comics..
I'll also not see the new Joker film.. Aquaman is more my thing... drama should have humour!

I don't think there are that many in the USA who are interested in comics of the 1930s/40s, Manic. More than here, yes, but it's not a huge deal with them.

Not sure there is a resurgence is there, Kevin? Or am I misunderstanding your point?