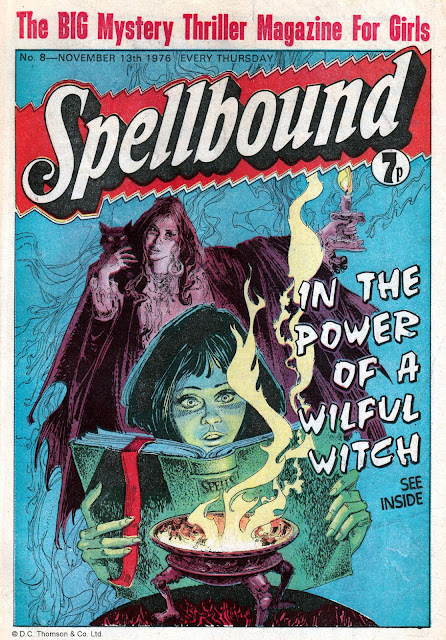 The mid-1970s were an interesting period for British comics. The old style comics such as Hotspur and Lion had become to look somewhat old fashioned (in fact, Lion had folded in 1974). Bold new titles were emerging such as Warlord, Battle, Bullet, and Action.

Changes were afoot in the girls' comics too, heralded by Tammy in 1971, with stories that packed more of an emotional punch than its predecessors. Theme comics were all the rage now, and in 1976 D.C. Thomson tried something new with a girls' weekly having a supernatural theme. Spellbound was its title.

Spellbound only ran for 69 weeks so clearly didn't engage as many readers as hoped. A great pity, as from all accounts it was a very good comic! I never bought it at the time because... well, I was 17 and it was a girls' comic, so I didn't even give it a glance. These days I can view it differently, with a more mature attitude and a professional eye, for its art and story construction. However, a complete set is very expensive today, and even individual issues sell for around £9 on eBay. I recently invested in one issue to see what it was like.

The sample pages here are from Spellbound No.8, dated November 13th 1976. One thing that was clear as soon as I saw it was how much it must have influenced IPC's Misty when they launched it two years later. Typically though, Thomson's Spellbound is a little calmer than IPC's Misty, but they are similar in style and design.

Here are a few pages from that issue. The art is superb and possibly by mostly European artists? Unfortunately I can't identify them so if anyone can help, please post a comment below. 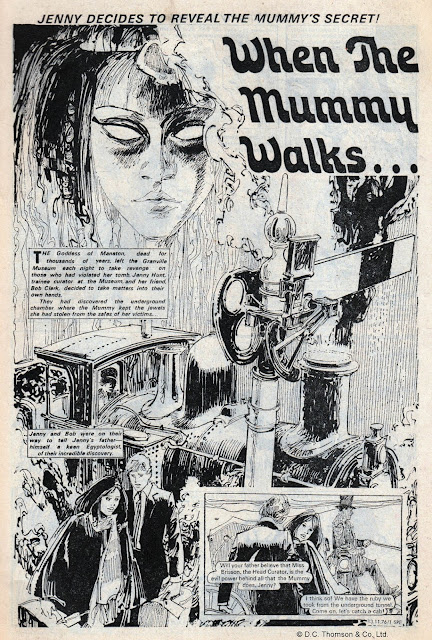 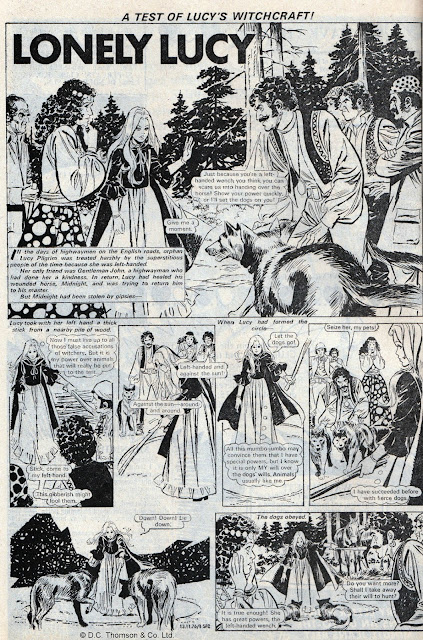 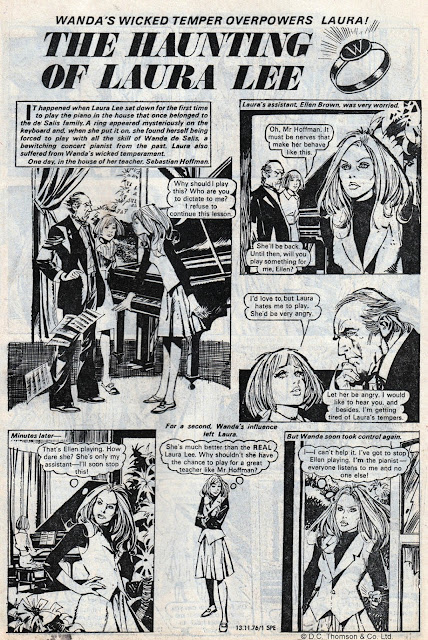 The strip that most seem to remember is Supercats. Four super-powered young women encountering space mysteries. The art for this is usually cited as Enrique Romero but this one doesn't look like his style to me. 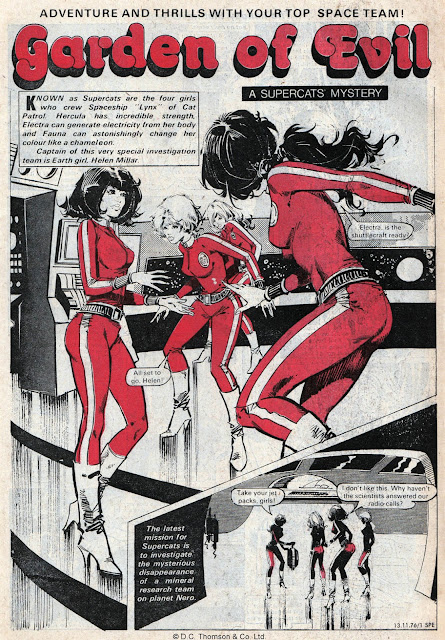 Spooky storyteller Damian Darke provided the narration for the complete stories every week. This one has fantastic artwork... 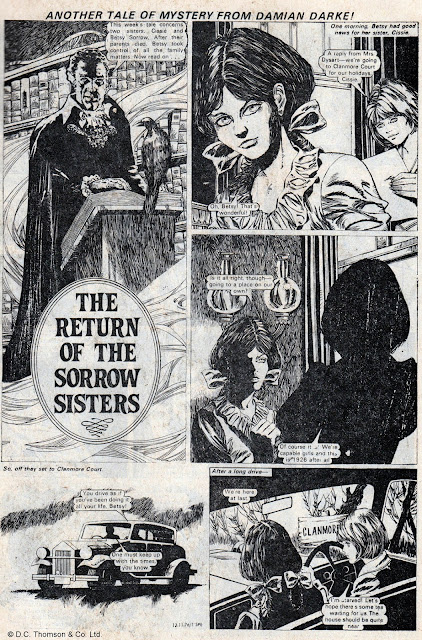 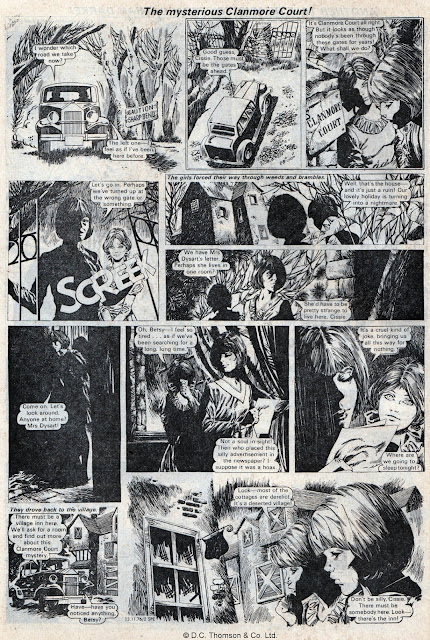 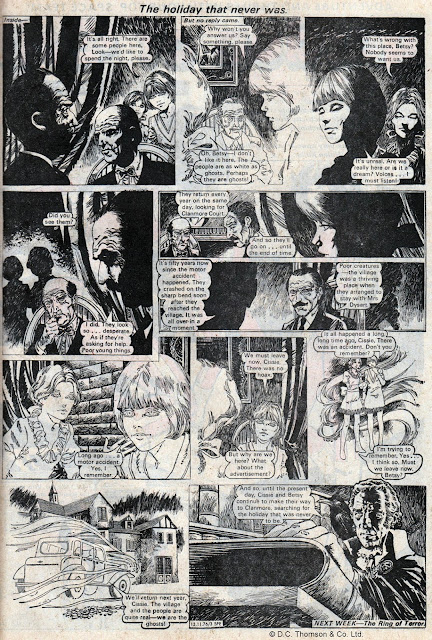 There's a rumour that something supernatural may be stirring from Dundee around Halloween. Will it be related to this classic comic? More news as I receive it...

Email ThisBlogThis!Share to TwitterShare to FacebookShare to Pinterest
Labels: Spellbound

The cover and first story is drawn by Norman Lee. He was the regular cover artist on Judy and the Judy and Co story in the 80s.

If I could have gone back, I would have gotten two girls' comics - Spellbound and Misty.

Though understandable at the time being that I was not even a teenager yet. If only I had a sister.

eBay is always an option. I've managed to get complete runs of Crunch, Buddy, Spike and Champ in very nice condition but Spellbound is too expensive at the moment. Someone's currently trying to sell s complete set for £750!

The Supercats strip could be by Jorge Badia Romero (aka Jorge B. Galvez), brother of Enric Romero.

Have bought some collections from eBay such as Action and have been looking to get Misty and Spellbound but as you say - currently too expensive.

Hi Lew, Norman Lee's dad, also Norman, was the head of the DC Thomson art dept in the 1950's and early 1960's and young Norman Lee had his first strip published in the first issue of Romeo in 1957. He then worked on strips for Romeo and Thomson's other women's picture papers for twenty years until he began working for their girls comics in 1976 with the first issue of Spellbound.

Thanks for the info, Ray! Hope all's well. I'm woefully ignorant of most of the background to the DC Thomson adventure comics* so input from you and Sean is always welcome.

* (Which is why I never describe myself as a comics expert / historian. I know bits about certain comics/artists, but not as much as you Ray, or the late Denis Gifford for example.)

Smashing post and great extra info from your readers! Thank you.

Cheers John. Like yourself, I'm eager to find out what DC Thomson have planned in regards to Spellbound. Teasers are out there, and Halloween draws near. What will emerge from... the unknown?

A really interesting read Lew, article and comments alike. On a sidenote, my sister was a little too young for Spellbound but read it’s stablemate, Magic Comic (for younger readers) from the start, which a quick bit of research shows started earlier in ‘76 and ran for three years. The fact it outlasted Spellbound surprised me a bit.

Along with Misty comic, the magic/supernatural theme was obviously a popular genre around this time.

Horror was back in vogue at that time. I remember kids at school reading The Rats, and them going to see The Exorcist. Marvel in the USA had loads of horror comics out that were also sold in the UK, so it was only natural that kids comics would delves into the, er, SUPERnatural. :)

Hi, it may be not related to "Spellbound" or to anything but can I explain a comics story I may or may not have either read in pages like this, just dreamed under raging influenza?

I'll call it "The Cliff Trolls" and it concerns a small and impractical British hotel on the top of a coastal cliff. On holiday are two children, girls (girl comic) or one of each (adventure comic), and an Agatha Christie mixture of suspects and motives as other guests. No impression of children's parents but probably someone's there.

Someone (kids? local tour guide?) discovers a small nest of peculiar creatures - or maybe creature statues - living (or not) in the cliff. Like Furbys - or puffins. I have an image of little interested big-eye owl faces looking up from a hollow. I also have an image of one of those trays with twelve compartments that they were in, but that may be merchandise I saw on a recent comic store visit of the same sort.

Everybody wants their own critter and, as I say, have distinct motives to exploit them. So several are stolen by hotel guests. But then it becomes apparent that they have strange powers. Each of the would-be new owners has either a Thirteenth Floor-type hallucination or a visit to another dimension, or something. Most survive. It's questioned whether the cliff trolls have evil intentions (including the statue ones) and what is their origin. Did they arrive from another dimension? From outer space? From the novel "Madwand" by the late Roger Zelazny? Or Doctor Who story "The Auton Invasion"? Anyway, it's agreed that the cliff trolls will be put back where found and left alone. This may require the tour guide to promise just not to find them again.

End of story... until Rebellion has bought the copyrights and news from the hotel is that... what? I don't know, but it could be the things are indeed breeding or invading and there's hundreds and they will now open the portal to their home world or something, like in that Doctor Who story with the double decker bus, or take over the British government, like in all those other ones.

This sort of thing used to happen all the time, I seem to remember.