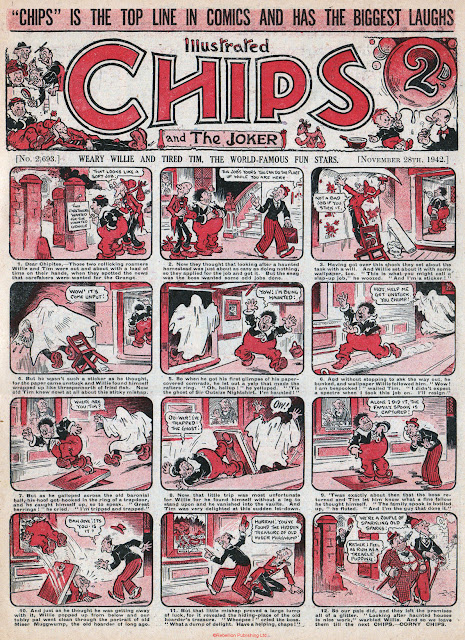 There's nothing significant about this issue of Illustrated Chips but it's been a while since I posted an old cover (and "old" to me is anything pre-1959) so I thought I'd select this issue which would have been in shops exactly 77 years ago this week. At that time, Chips (and many other comics) were fortnightly due to wartime paper rationing, so although it carries the date of Nov.28th it would have been published two weeks earlier.

The cover strip Weary Willie and Tired Tim was, as ever, by Percy Cocking, who'd draw it until the comic ended in 1953.

I thought I'd show the Casey Court cartoon from the back cover too, as I know some of you like these busy images. Art by Albert Pease. 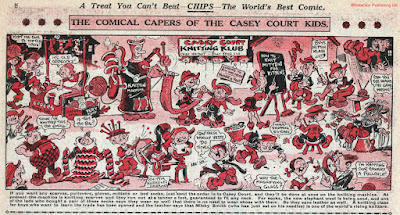 Comics of this vintage and older are always the least popular on this blog and receive less views than others. I know most fans are only interested in comics of their own nostalgia but from my point of view if you're interested in comic art it shouldn't matter what decade they're from! These comics appeared 17 years before I was born and I think they're great!

Love the Albert Reese art like a few others from that time it reminds me very much of some mid to late 1970s underground comix . Strange to think though these were produced only 17 years before we were born.

It's Albert Pease, Paul. Looks like your autocorrect switched it to Reese.
The UK Cozmic Comix of the 1970s were inspired in part by this style if they're the ones you're thinking of.

Always wanted to ask this: why was this comic called "Chips"? Does it refer to chips of wood? Or...?

Sorry Lew I really need to check my replies before I send them ( need a new laptop I'm not good texting on my mobile). Yes it was Cosmic comix I was thinking of thanks for the memory jog.

I think it was a printer's term, Smurfswacker, probably referring to the paper being made of wood pulp. I'll have to check.

mm.. for the name.. I'm pretty sure Alfred Harmsworth started Comic Cuts first, which was pretty badly done at first as it was much cheaper cause he stole from an older comic 'Scraps', which lead to the publisher (James Henderson) taking action for Copyright thief, which lead to Comic Cuts having original content.. anyway.. You have 'Scraps' like scraps of paper, you have 'Comic cuts' like bits cut out of stuff (which it kinda was at first ^_^), so 'Illustrated chips' follows the same kinda pattern there.. It was bits of something which was then illustrated... I know Chips as in the term for grading paperlike stuff (as in, a chip missing on the cover)…

Not sure but.. I would say the whole theme was related to it being the comics taking out of papers and put together? so a collection of the strips.. something like that? seams logical... I know the comic was a huge flop and was connected after 6 issues.. the brought back and went for about 60 years..

Yes, Comic Cuts and Chips were from the same publisher.

thanks for another gem and of course love Casey's court,,

I thought you'd appreciate it, Peter. Thanks for commenting.

Single-illustration features, like Casey's Court, remind me of Bill Titcombe's DPS illustrations for the Telegoons in the mid-sixties TV Comic annuals, where one had to scan the complete spread for all the individual jokes it contained. He'd produced the feature earlier as conventional strip narratives but by 1967 (I think it was) the double-page spreads replaced them.