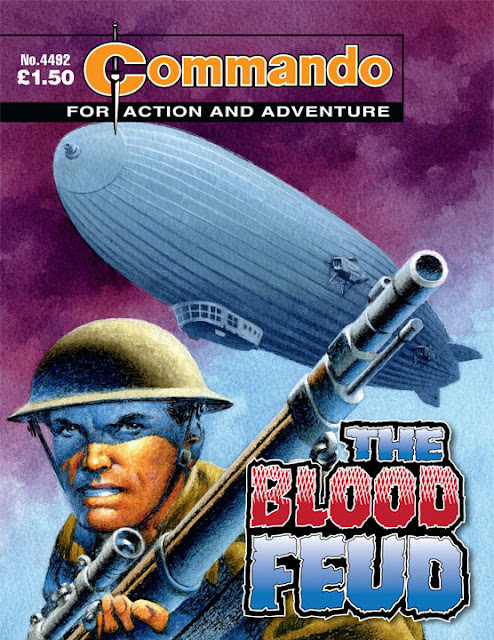 Don't let the headline worry you. DC Thomson's long-running Commando is still in its 64 page pocket size format but it's now printed on thicker paper stock giving it a chunkier appearance. I'm sure most readers will welcome this move as the previous paper stock was very thin.

I was tempted to run with the headline 'Thicker Commandos' but thought better of it. Anyway, here's the info from editor Calum Laird on the latest four issues that are out now. (Hopefully! My local shops haven't received theirs yet.) 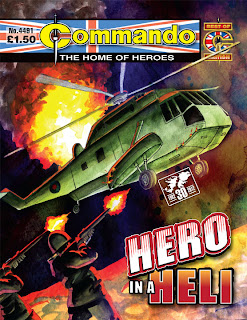 It takes nerve and skill to hold a bucking, weaving Sea King in position over a casualty while one of your crewmates is winched down to try to pluck him to safety. Lieutenant Jamie Price had both these qualities which helped make his crew one of the best in the business.
Yet his brother Owen, a Sea Harrier pilot, ranked him only as a glorified bus driver, never missing a chance to sneer.
He never dreamt that he’d have to trust his life to that bus driver in the hostile skies over the Falklands Islands.

The second in our mini-series of Falklands tales 30 years on.

So how did it come to pass that Warrant Officer Greg Blake was about to take on a menacing German Zeppelin during the First World War, armed with only a Martini-Henry rifle?
It’s a thrilling tale — one which stretches back to the Boer War, and tells of a bitter blood feud that spanned a generation… 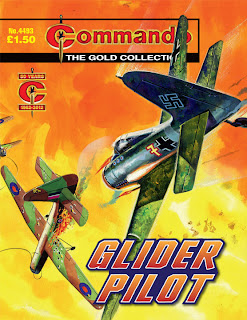 Like great birds of prey the gliders swoop into enemy territory, defying the might of the Luftwaffe and the savage assault of the flak batteries.
Once on the ground their bellies open to spill out bands of fighting men who strike terror into German hearts — the famous airborne Commandos. They give no mercy — and ask none, these men who have been taught to kill…

Spoiler alert! In 1962, when this gold nugget was first unearthed, the plot device of the trainee who couldn’t quite cut it was new to Commando. We’ve used it many times since, because it’s still an excellent premise for a story. Eric Hebden makes fine use of it here.
The inside art by Bonato has a clean, clear line to help the story-telling. He’s sparing in his backgrounds, keeping the emphasis where it should be, on the characters who are taking the fight to the enemy on his own ground.
You can’t fault Ken Barr’s cover composition or execution for drama and colour — no wonder the original title was so small, no-one wanted to cover any of it up. 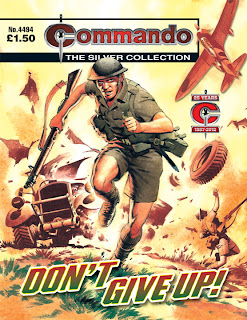 As a Japanese dive-bomber roared in to destroy their trucks, a group of British soldiers scattered for cover. Every man knew they now faced a long trek through the Burmese jungle, trying desperately to stay ahead of the enemy advance.
It wouldn’t be easy, buy they must never give up.

Commando stories are fictional, of course. However, our tales do not shy away from the grimness of war, while still providing solid action yarns.
As a young Commando reader — many years ago — I always found jungle stories to be especially hard-hitting. I could just imagine being immersed in that all-encompassing, claustrophobic atmosphere, where the enemy could strike out of nowhere at any time…
This story reflects all of the above, as a motley crew of heroes — including one man who, in reality, isn’t particularly heroic — strive against the odds to blow up a bridge while all the time ensuring that they “Don’t Give Up!”

I picked up my set of 4 from the local newsagent yesterday and they are a massive leap in quality. The binding on Commandos hasn't been great for the last couple of years, with creases coming from the spines to nearly halfway across the pages making them quite difficult to store.

That's all changed with these issues, they are square at the spine and stiff. Comparing one of the last set with one from this set the new one is over twice as thick as the older one. The comic now has a nice heft and solidity to it.

The colours on the cover pop very nicely as well, the Ken Barr 4493 and Kennedy 4494 looking especially good. The interior paper is whiter thus making the black and white art look crisper so all in all its a top job from the Commando team in my opinion.

So far I am very impressed with the new format which is very similar to the three story books that have been put out by Carlton of late, in fact three Commandos are the same thickness as one of those.

But I shall reserve judgement for four or five days, which was about the time it took a pristine shop bought copy of Commando to warp along the spine despite being stored flat under a weight of objects prior to reading.

They do now look very nice and substantial which is in one way is a shame as I had nearly perfected my method of de-crinkling an issue in order to be able to read one.

Picked up a copy yesterday in Smiths. The new "square bound" format looks very nice. Makes it look more like a book than a comic so will hopefully appeal to those who've been picking up the Carlton reprints.

While I was there I was pleasantly surprised to see the Beano Ultimate Summer Special Number Two which I had no idea was coming out.

Of course, they wouldn't have upgraded to a doubtless-more-expensive paper if they couldn't afford it, the higher profit margin from the reportedly very popular digital issues must be going back into the paper ones!

Also today I bought the last copy of the Falklands story on the shelf in Smith's, I always thought that branch was just being annoying and not getting in all four issues, but it's always been one of the new issues that was missing. It's not that they weren't stocking them - they were running out!

My newsagent has them now so I bought the new two today. I like the pulpy paper and it makes the comcs feel more substantial which I'm sure will help increase sales.

The sad thing is Mike that although your local Smiths sell out of some issues they obviously don't increase their order the following month. I suspect all four issues are considered as one, so if they have the reprints left over they just think "Commando never sells out so we won't order extra".

I'm sure many people only buy the new issues (that's what I usually do) so unfortunately it doesn't give an accurate impression of the demand for the comic.