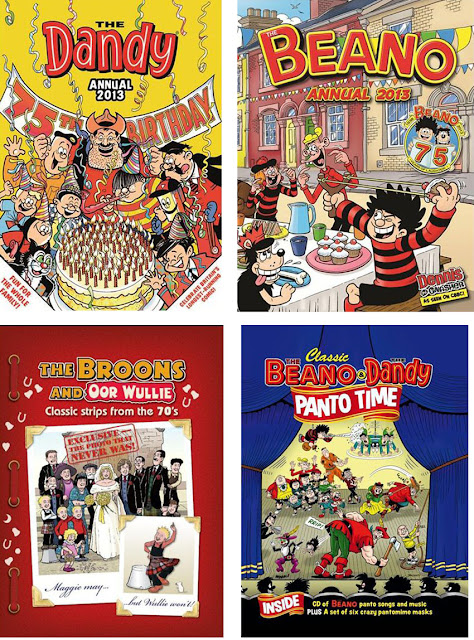 The front covers to some of the 2013 annuals have been revealed on the websites of online mail order companies. Amazon has a fair number of covers shown but it's Play.com that have the images to the comic annuals on display. As you can see above, The Beano Annual 2013 and The Dandy Annual 2013 (cover by Nigel Parkinson) both celebrate the 75th anniversaries of their titles. 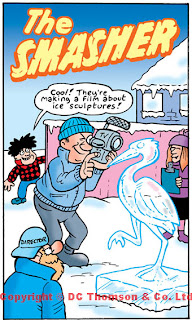 There'll be more than a hint of nostalgia to this year's Dandy Annual as it'll be packed with old favourites given a new spin. I've done six single page strips for the book, three of one character and three of another. I'll keep one of those secret for now but today I'll reveal that one of them is... The Smasher! The original strip began in The Dandy in 1957, drawn by Hugh Morren, and had a very long run. It was later drawn by Brian Walker.

I haven't even attempted to mimic the styles of those two greats but I hope readers enjoy my version. I wrote the scripts for the three strips as well. As a nod to the past, Smasher retains his black mop of hair and the diamond pattern on his top. I've also used a couple of the 1960s logos which I scanned from the comics, cleaned up in Photoshop, and recoloured. Smashin' nostalgia, hopefully! The image shown is the opening panel to one of the stories.

The 2013 annuals will begin to arrive in bookshops from early July. As usual, the listings are dominated by licensed titles. Here's just three of them...

There's also titles for older readers, including The People's Friend and My Weekly annuals with prose stories for your mums, aunts and grandmas... 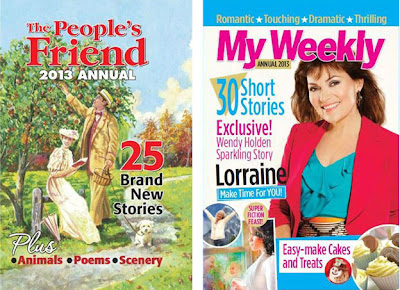 Last but not least, the Oor Wullie book, which still appears every other year alternating with The Broons... 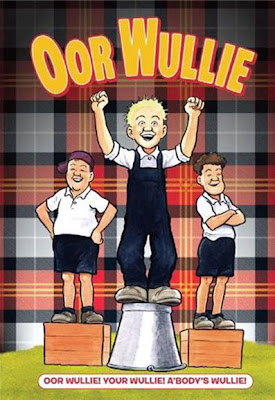 The Smasher! Great stuff! That Dandy annual will be well wortha look.

Thanks Robert! I was asked to do my own version but make it closer to The Smasher of old, rather than the well-meaning accident prone 1990s version.

I know some won't be happy because I haven't ghosted Hugh Morren's style, but if that was the book's intention they'd have used reprints. I'm looking forward to the book myself to see what everyone else has done!

Ignore the strange trolls Lew. I'm not really into the funnies but your Smasher looks fine.

It looks nice, a good take on the character from what i can see ^_^

I'm still wondering what happened in 1965.. before that, on the whole, an annual had the date of the year it was issued.. after that.. it was mostly the next year.. I guess it could partly be to do with shelf life, but.. still seems like Overkill and after this many years.. it doesn't really have the same effect surely?

Fleetway's annuals featured the advance year date on their covers before 1965 so it was probably just a case of Thomsons following suit so their books wouldn't seem less new than their rivals.

Every annual is someone's first, so I'm sure kids today still get a little excited over seeing next year's date on the cover. Also, it helps to distinguish each annual for the retail ordering system.

So excited to see the return of Smasher- one of my longtime favourites. I know you said you weren't trying to imitate, but I think your version looks like a modern day Hugh Morren Smasher. Have to say I did alway like the 'accident prone' version, but happy to have him back in any form!

Any chance he'll work his way into the weekly, or is this purely a one-off annual job?

Thanks. As far as I know there are no plans to bring him back to the weekly but I'd be happy to draw it if asked.

We now know a majority of the strips in the annual:

I presume from the annual cover that we'll also be seeing more of Nigel's Desperate Dan - after all, Jamie has announced he will be featuring in the 2013 annual. :(

Nigel also looks to be a likely artist for Owen Goal. I bet he'll be drawing Greedy Pigg too!

A shame there's nothing of Andy Fanton in this annual either - you'd think Harry and his Hippo would have been a definite!

Great to see the new annuals this for this year. The Smasher makes a wonderful appearance. I bet Winker Watson never thought he'd be on the front of the Dandy Book! I happen to know that Pansy Potter will be appearing in the Beano annual this year. Can't wait to buy them as well as the History of the Dandy by Morris!
Hears to a great year of annuals!

Loving the retro themed Dandy Annual even if I can't look at Bully Beef any more without thinking of Biffa Bacon !